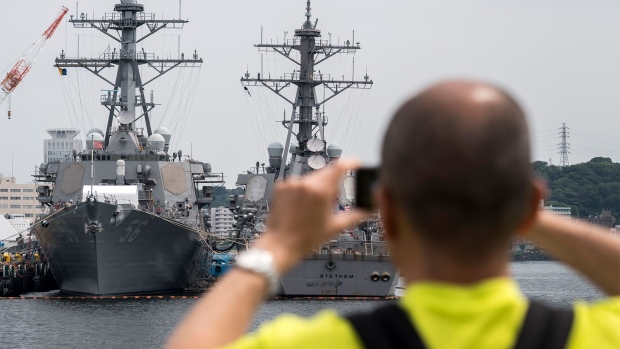 YOKOSUKA, JAPAN - JUNE 01: A man takes a photograph of naval ships including the USS John S. McCain (DDG 56) destroyer (L) moored at the Yokosuka Naval Base on June 01, 2019 in Yokosuka, Japan. On Thursday, U.S. President Donald Trump has denied any involvement the move to hide the Navy Ship USS John S. McCain during his recent visit to its home port in Yokosuka, after reports emerged of emails being exchanged about keeping the ship out of view. Nicknamed “Big Bad John,” the McCain is a 505 feet long destroyer that honors late U.S. Senator John McCain and has a crew of 338 people. The ship was reportedly part of the U.S.’s invasion of Iraq in 2003 and participated in relief efforts after an earthquake struck Japan in 2011. (Photo by Tomohiro Ohsumi/Getty Images) , Photographer: Tomohiro Ohsumi/Getty Images

In an  email to the US Navy ahead of Trump’s state visit that May, a US Indo-Pacific Command staffer laid out a list of demands including the directive that “USS John McCain needs to be out of sight.” The official later followed up with a note saying “Please confirm #3 will be satisfied.”

The newly disclosed emails reveal that Navy officials asked for names of the individuals who requested the move. One message simply says “This just makes me sad…” while another says “I could see that becoming a Tweet...”

The emails were disclosed under a Freedom of Information Act and add new details to the Wall Street Journal’s previous reporting on some of their contents in late May 2019. Ultimately, the request to hide the ship was rejected, though a tarp was hung over the name, according to the Journal’s report. At the time, Trump denied that he asked for the ship to be hidden, though he said a “well meaning” person appears to have made the request.

In June 2019, Acting Defense Secretary Patrick Shanahan confirmed that the White House Military Office made the request and said the Pentagon did not need to investigate the matter. The ship was also named after McCain’s father and grandfather.

On many occasions, Trump attacked McCain, who died in August 2018. He said the former senator, who spent more than five years as a prisoner of war in Vietnam, was  “not a war hero.”