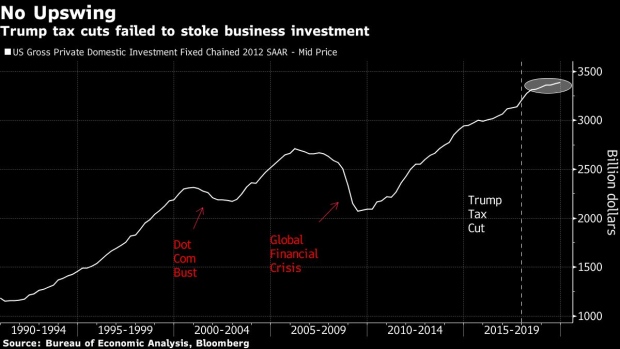 (Bloomberg) -- The White House views Republican attacks on President Joe Biden’s proposal to use corporate tax hikes to pay for a vast infrastructure program as a losing argument in the battle for public opinion, aides and allies of the administration say.

The GOP -- which successfully painted the Obama-Biden administration’s initial spending programs as economically ineffective and wasteful in the run-up to the 2010 congressional elections -- has joined with the business lobby in the past week to assail Biden’s proposed tax increases. The plan, its opponents argue, will hobble American corporate competitiveness and hold back the recovery from Covid-19.

Biden and his team are confident, however, that they’re on the winning side of the debate. The president on Wednesday made his second public appeal in a week for his $2.25 trillion spending plan, funded by higher levies on both domestic and overseas corporate income.

“The tax cuts that were passed in 2017 provide a really important case study,” Heather Boushey, a member of the White House Council of Economic Advisers, said in an interview. “Looking back at the Tax Cuts and Jobs Act, which did not catalyze that private-sector investment, that’s what we’re trying to reverse.”

President Donald Trump’s tax overhaul cut the U.S. corporate tax rate to 21% from 35%, while revamping international codes in an effort to encourage firms to bring income back home. Many, however, deployed their added cash to reward shareholders -- not to bolster wages or investment.

Government data show that, outside of housing, private-sector investment averaged 4% annualized growth over the eight quarters of 2018 and 2019 -- while the Trump tax regime was in place but before Covid-19. That’s little different from the 3.8% average of the previous five years, and well below the 6.8% pace of the 1990s -- when tax rates were higher.

Pre-pandemic polls found that only a minority of Americans approved the Trump tax reductions, which also brought down individual marginal rates, as individuals reported little impact on their wallets.

Fighting to keep the Trump tax overhaul in place is both bad politics and bad policy, the White House and its allies say. The winning argument is the “American Jobs Plan,” which they contend will boost U.S. businesses even with the higher taxes -- by rebuilding roads and bridges, or making a worker with, say, an ailing parent more productive by funding elder care.

“These are all the kinds of things that are going to actually grow the economy,” Boushey said.

Treasury Secretary Janet Yellen said separately that the proposed tax program would prove more effective in addressing incentives for companies to shift profits and investments abroad. She and Biden argued that the plans -- including a 15% minimum levy on profits reported on financial statements -- would make the code more fair.

Biden said at least 55 of the largest U.S. companies paid no federal corporate income taxes in their most recent fiscal year.

“It’s just not fair. It’s not fair to the rest of the American taxpayers,” the president said. He was citing a study by the left-leaning Institute on Taxation and Economic Policy.

The administration is also expected to propose raising the top rate on Americans making more than $400,000 a year to 39.6% from 37% -- a trickier issue for Democrats representing wealthier communities -- to fund new spending on education and health care.

Republicans warn that reversing the Trump tax cuts will be deeply damaging to the economy. Senate Minority Leader Mitch McConnell has led the charge, calling the president’s plan a “Trojan horse” masking “massive tax increases on all the productive parts of our economy.”

“At the end of the day, we are going to see slower hiring, less investment in the U.S. and I predict we will see a second wave of U.S. companies inverting or moving their headquarters in the long run,” Representative Kevin Brady, the Texas Republican who led the 2017 tax overhaul efforts in the House, said Tuesday on CNBC.

The Biden team doesn’t think those critiques will play well with the public.

Republicans “promised it would pay for itself and that there would be this huge increase in the growth rate and none of that happened,” said Austan Goolsbee, a former chairman of the White House Council of Economic Advisers under President Barack Obama and now an economics professor at the University of Chicago. “There’s this basic feeling that it did not go down in the way they said it would and they are in the uncomfortable position of defending that it did.”

Americans had a net-negative view of the 2017 tax cuts in surveys conducted in April 2019, with a Pew Research Center poll showing just 36% of Americans said they approved of the law while 49% disapproved. A Gallup poll showed 40% approved and 49% disapproved. Gallup also found that nearly seven in 10 Americans believed corporations paid too little in taxes -- a figure that’s stayed relatively constant in nearly two decades of its polling.

By contrast, just before Biden laid out his plan, a Morning Consult-Politico poll found that 54% of registered voters supported federal infrastructure spending financed with tax increases on corporations and the wealthy, while 27% preferred the spending without the tax hikes. Independent voters were similarly divided. Some 32% of Republicans said they supported the spending being paired with tax increases.

“It seems to me to be political malpractice for Republicans to jump into bed with these giant corporations that are either paying no taxes or engaged in these outrageous stock buybacks,” Democratic pollster Geoff Garin said. “If it were me, it’s not the kind of company I would want my candidates to be keeping.”

Republican pollster Whit Ayres said that “as a general rule, tax increases on everybody but me are popular, so corporate-tax increases are always popular because voters don’t perceive themselves as paying that tax even though they do indirectly.”

Even so, “you can’t look at public opinion to make considered judgments about those economic consequences,” Ayres said, reiterating the Republican view that corporate tax increases will drive American business overseas.

Biden’s proposals still face months of negotiations in Congress, with moderate Democrats expected to reshape whatever tax reforms do get passed.

Commerce Secretary Gina Raimondo said Wednesday that the administration is open to compromise.

“What we cannot do and what I am imploring the business community not to do is to say, ‘we don’t like 28, we’re walking away, we’re not discussing.’ That’s unacceptable. Come to the table and problem solve with us to come up with a reasonable, responsible plan,” she said at a White House press briefing.