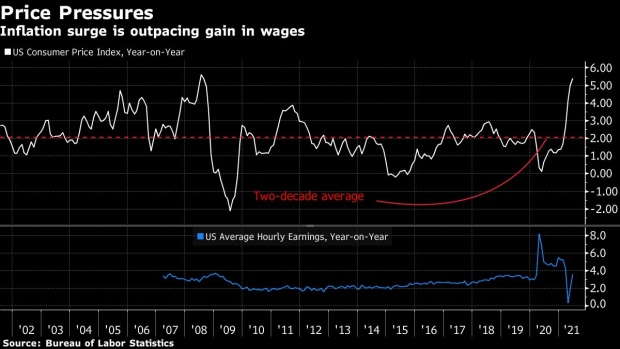 (Bloomberg) -- The White House is shifting the way it talks about inflation, as polls show increasing voter concern and Republicans try to use rising prices to kill off President Joe Biden’s sweeping plans to spend trillions of dollars on social programs and infrastructure projects.

Out: wonky words like “transitory” and complicated statistical explanations for price indicators.

In: plain-language explanations from the president himself, who sought in remarks last week to acknowledge ordinary Americans’ jitters about higher costs -- for items ranging from housing, food and gas to lumber and used cars -- while reassuring them that the increases will fade in time.

“My administration understands that if we were to ever experience unchecked inflation over the long term, that would pose real challenges to our economy. So while we’re confident that isn’t what we are seeing today, we’re going to remain vigilant about any response that is needed,” Biden said in July 19 remarks in the State Dining Room.

Biden’s efforts to address the issue also show the extent to which inflation -- an economic phenomenon that barely registered in American politics for 40 years -- represents a vulnerability in the 2022 midterm elections. Worries are increasingly showing: consumer sentiment was weaker than all economists’ forecasts in early July as Americans factored in a higher cost of living. And the president’s own approval rating has been slipping, this month hitting its lowest in Gallup surveys since he took office.

White House aides insist the rhetorical shift does not reflect any substantive shift in their view of inflation. They say Biden’s team still believes the recent surge in consumer prices is a temporary headache caused by the economy readjusting to normal after a once-in-a-century crisis triggered by the pandemic.

Administration allies say the change in Biden’s language is welcome, after the administration tried in its early months to dismiss inflation concerns with technical explanations. National Economic Council chief Brian Deese was among those describing the acceleration in price gains as “transitory,” as of early June.

The senior White House official, speaking on condition of anonymity because the discussions are private, said that the term “transitory” now carries a lot of baggage -- following its widespread use starting in the spring by both the administration and Federal Reserve policy makers.

“I have no idea what the word transitory means,” said Jason Furman, an economics professor at Harvard and former chairman of the Council of Economic Advisers under President Barack Obama. “Inflation is currently running at a 9% annual rate. If it goes to 7%, does that mean it was transitory -- because some of the nine went away? Does it need to go to 2 to be transitory?”

“A hot summer for inflation still lies ahead. Households flush with extra savings are eager to spend after lockdowns, and supply shortages are extreme.”

“We anticipate moderation consumer price increases will only become more apparent in 2022.”

Republicans have made inflation their key argument against Biden, arguing that his $1.9 trillion pandemic-relief package in March injected so much cash into the economy that it’s driven up prices. They also criticize it as having given incentives for workers to keep collecting unemployment checks instead of looking for work -- preventing a broader recovery in employment that could help address bottlenecks in the conomy.

“The staples of American life are increasing exponentially,” said Senator Tim Scott of South Carolina, citing cost spikes in bacon, furniture, used cars and laundry machine prices. “Americans have seen a 3.5% increase in their wages, but inflation at 5.4% is an actual reduction in the take home pay of everyday Americans.”

Agriculture Secretary Tom Vilsack, in an interview with Bloomberg Television Friday, countered that much of the food inflation is tied to prices of items consumed outside the home.

“The overall food inflation rate is not that much higher than it normally is,” Vilsack said. Though costs for “selective items” in grocery stories have increased, “we think this will even out as we begin to recover” and supply and demand becomes better balanced, he said.

Scott and other GOP lawmakers are also warning that Democrats’ plans for a $3.5 trillion social spending package will only pour “jet fuel” on inflation.

Republicans highlight how Larry Summers -- who served as Treasury secretary in the Clinton administration and head of the NEC under Obama -- has been among the voices warning about inflationary policies.

Biden’s top economic aides, Deese and Cecilia Rouse, head of the Council of Economic Advisers, recently met with Summers for what officials described as a scheduled visit. Summers, a paid contributor to Bloomberg, declined to reveal what was discussed.

With Biden’s agenda at stake, and the 2022 midterm election campaign in the backdrop, administration officials have battled to influence the narrative and emphasize their attention to inflation.

Over the last several months, a small circle of White House economic aides from the National Economic Council, Council on Economic Advisers, Treasury Department and the vice president’s office have closely monitored inflation data, poring over statistics and sharing analysis by email.

The president opted to speak about inflation twice last week to address what’s become a notable trend in the economy and to try to put it in a more analytical context, the senior official said.

White House Press Secretary Jen Psaki, asked on May 12 about a spike in the consumer price index, released earlier that day, responded that inflation “is obviously something we monitor quite closely,” while noting that it’s the job of the Federal Reserve “to manage all aspects of inflationary pressure.”

On Thursday, Psaki, when asked about inflation, said “We do take it incredibly seriously.” While again noting that handling it was the “purview” of the Fed, she also highlighted “steps we’re taking,” including expanded child tax credits -- which can help bolster household spending power in face of cost-of-living increases.

The White House is also pushing the idea -- backed by recent research by Moody’s Analytics -- that the twin infrastructure and social-spending programs will help to strengthen the economy and help solve some of the supply and demand issues -- ultimately easing cost pressures. Furman also noted the proposed spending would be distributed over a multi-year timeframe.

The senior White House official cited a recent fall in skyrocketing lumber prices as one example of inflationary pressures starting to correct itself.

Bloomberg Economics projects that consumer price gains will ease to about 1.5% by the fourth quarter of 2022, compared with an average of 5.3% this quarter.

Fed policy makers also see the current surge in prices subsiding in time, while pledging to act if that doesn’t prove to be the case. Fed Chair Jerome Powell saw firsthand this month how inflation -- which had essentially been dormant for a generation -- is now a hot-button political issue.

When Powell spent two days testifying before congressional committees on July 14 and 15, no fewer than 18 Republican members raised questions or outright fears over inflation.

Treasury Secretary Janet Yellen, Powell’s predecessor as Fed chief, has the same view that the inflation acceleration will prove temporary. “We shouldn’t expect it to disappear next month, but certainly over the medium term I don’t think it will continue,” she said in an interview with National Public Radio on July 15.