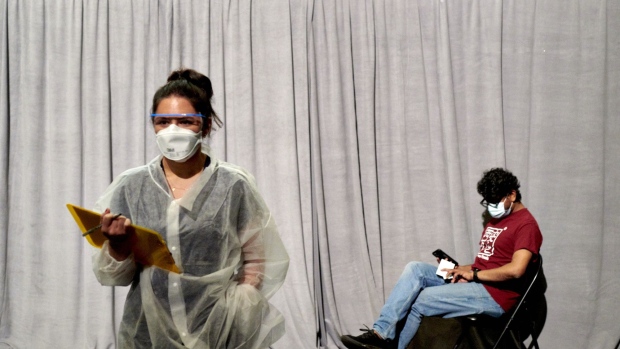 A person sits in the observation area after receiving a dose of the Moderna Covid-19 vaccine at the American Museum of Natural History vaccination site in New York, U.S., on Friday, April 30, 2021. New York City is moving to fully reopen on July 1, Mayor Bill de Blasio said, though Governor Andrew Cuomo said he wants it to happen sooner. Photographer: Gabby Jones/Bloomberg , Bloomberg

(Bloomberg) -- President Joe Biden’s administration told governors Tuesday that it would begin reallocating vaccines that go unclaimed by states -- essentially clawing back unwanted doses from places where the pace of shots is lagging in order to steer them elsewhere, three people familiar with the call said.

The White House told governors about the switch during a weekly call with the state leaders. Biden is due to speak Tuesday afternoon at the White House about the Covid response.

Vaccine uptake has varied significantly by state, but the U.S. has been allocating the supply evenly based on adult populations, regardless of how many doses are being used. The plan will see weekly unclaimed doses essentially repooled for any state to claim, including those with higher demand, the people said. States that don’t order their full allocation one week can still request it on any following week, two of the people said.

The seven-day average of shots has fallen to 2.3 million, from 3.4 million, in about three weeks, according to data compiled by the Bloomberg Vaccine Tracker. The U.S. administered 1.2 million shots Monday, the lowest daily total since February, though Monday is typically a slower day for vaccination data.