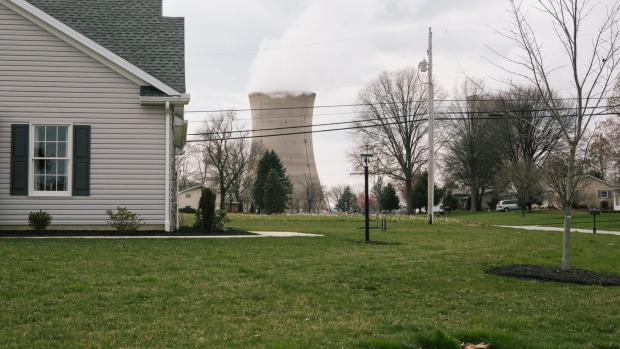 A cooling tower at the Exelon Corp. Three Mile Island nuclear power plant stands behind residential homes in the neighborhood of Londonderry Township near Middletown, Pennsylvania, U.S., on Wednesday, April 11, 2018. On Sept. 30, Exelon Corp. plans to take Three Mile Island offline because it is no longer profitable. Across the U.S., Nuclear plants are having trouble staying competitive in an era of cheap natural gas, a product of the shale boom. Photographer: Michelle Gustafson/Bloomberg , Bloomberg

(Bloomberg) -- Nuclear energy should be one of the power sources eligible for a national clean energy mandate sought by the White House as part of its infrastructure plan, presidential climate adviser Gina McCarthy told reporters.

McCarthy’s remarks on Thursday came amid concern about the carbon-free fuel source from progressives and some environmentalists who have qualms about radioactive waste and uranium mining for reactor fuel.

Inclusion of nuclear in the so-called Clean Energy Standard, which requires the generation of clean power, could be a boon for companies including NuScale Power LLC, TerraPower LLC, Westinghouse Electric Co., General Electric Co., and Exelon Corp.

“The CES is going to be fairly robust and it is going to be inclusive,” McCarthy said on the call, adding that carbon capture, which also has drawn the ire of some green groups, will be included in the emerging energy proposal as well.

The White House wants the clean energy requirement, which was included in the $2.25 trillion infrastructure plan President Joe Biden unveiled Wednesday, to be passed as part of whatever bill emerges as a vehicle in Congress, McCarthy said.

But some analysts have questioned whether such a proposal would be allowed under the budget reconciliation process that allows passage of some tax and spending legislation on a simple majority vote, which is how Democrats are expected to attempt to pass the infrastructure bill.

Biden’s plan calls for sweeping investment in electric vehicles, renewable power and the electric grid as part of a broad blueprint to bolster the U.S. economy while combating climate change.

“This plan is exciting, it’s big, it’s bold, it meets the moment,” McCarthy said separately in an interview on Bloomberg Radio’s “Sound On” program on Thursday. “It recognizes that climate change is a problem.”