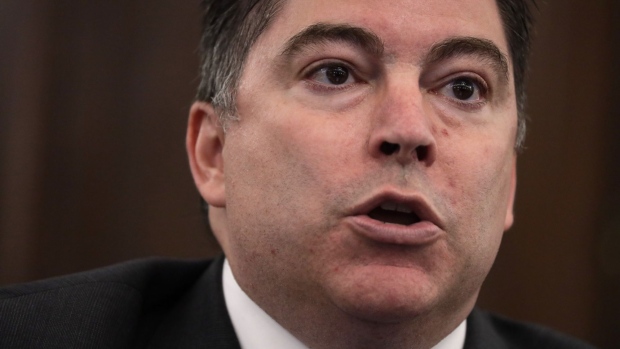 Michael O'Rielly, commissioner at the Federal Communications Commission (FCC), speaks during a Senate Commerce, Science and Transportation Committee hearing in Washington, D.C., U.S., on Wednesday, June 24, 2020. The FCC has increasingly scrutinized Chinese companies as tensions grow between Beijing and Washington over trade, the coronavirus and security issues. , Bloomberg

(Bloomberg) -- The White House withdrew the nomination of Michael O’Rielly, who has expressed doubt about President Donald Trump’s plan to reduce legal protections for social media, for another term at the U.S. Federal Communications Commission.

The White House announced the action Monday in a notice sent to the Senate, which confirms nominees. The notice didn’t provide a reason for the decision.

The FCC has a 3-2 Republican majority, and the vote of O’Rielly, a Republican, could be needed to advance Trump’s initiative. Both of the agency’s Democrats have expressed opposition to the president’s drive to narrow the shield against legal liability for companies such as Twitter Inc. and Facebook Inc.

In an interview in June on C-Span, O’Rielly said he wasn’t sure the FCC had authority to carry out Trump’s plan.

“The First Amendment protects us from limits on speech imposed by the government -- not private actors,” O’Rielly said in a July 29 speech.

O’Rielly’s nomination cleared the Senate Commerce Committee last month. He has been a member of the FCC since 2013, after working as a congressional staff member.

Gigi Sohn, a former FCC official, for her part raised the prospect that the nomination was pulled due to the administration’s social-media drive at the FCC, in a tweet on Monday.