What’s driving the surge in Bitcoin and will it last

Cryptocurrencies are on course for their biggest weekly surge since the last bubble in Bitcoin peaked about three years ago, ahead of a spectacular crash.

The Bloomberg Galaxy Crypto Index, which includes Bitcoin, Ether and three other digital coins, has rallied about 43 per cent this week, the most since December 2017. Bitcoin jumped to another record on Friday, with prices approaching US$42,000.

Cryptocurrencies are becoming emblematic both of the exuberance in financial markets as well as of the concern that the pace of gains is unsustainable. Believers in Bitcoin see it as a maturing asset that provides a hedge against dollar weakness and inflation risk. Others worry that the rally is untethered from reason and fueled by vast swathes of fiscal and monetary stimulus.

“The surge in Bitcoin is indicative of froth but not only in that market, in many other areas where risk premiums have come down sharply in the past year despite a recession,” said Kevin Caron, portfolio manager for Washington Crossing. “We view Bitcoin as a proxy for risk appetite.”

Commentators have pointed to a range of potential sources of demand for cryptocurrencies, ranging from rampant speculation by stuck-at-home day traders to increased purchases by institutional and corporate investors. 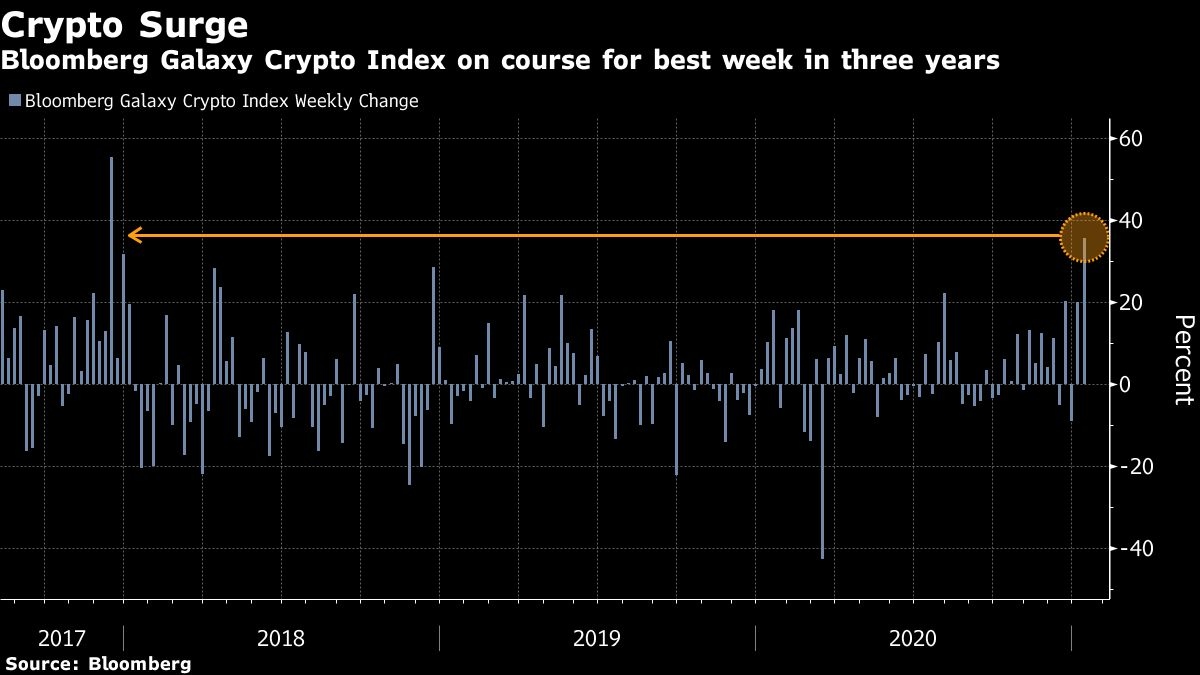 The potential for “upside of historic proportions” suggests investors should keep buying Bitcoin and Ether, according to Rich Ross, a technical strategist at Evercore ISI.

But in a note Wednesday he also described the outlook as “tulip-like,” a reference to the 17th century mania for tulip bulbs that led to one of history’s most infamous market bubbles and crashes.

The total market value of cryptocurrencies surpassed US$1 trillion for the first time this week after a fivefold climb in the past year, data from tracker CoinGecko shows. CoinGecko’s figures cover more than 6,000 coins.

“It seems like we’re in the middle of a simultaneous awakening among institutions to Bitcoin as an uncorrelated store of value assets with the possibility of serving as an inflation hedge in the face of a highly unconventional monetary policy environment,” said Frank Spiteri, chief revenue officer at CoinShares.