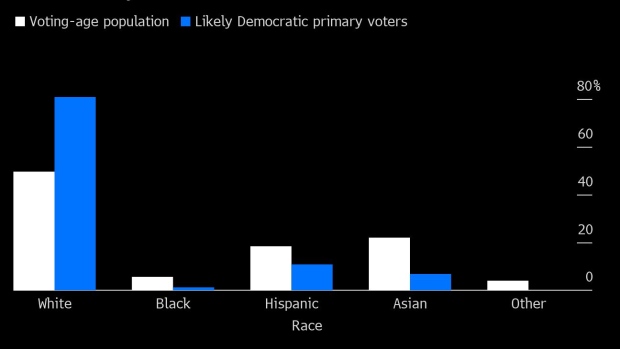 Apartment buildings in the West Village neighborhood of New York, U.S., on on Monday, July 5, 2021. New York's residential market is heating back up amid the easing of commercial restrictions and lower Covid-19 rates, although the market has yet to return to pre-pandemic levels, Forbes reports. , Bloomberg

(Bloomberg) -- New York City’s newly created US House district straddling Lower Manhattan and brownstone Brooklyn appears to represent the ultimate melting pot of Jewish, Black, White, Hispanic, Asian and gay voters concentrated in a city with some of the highest income inequality in the US.

But an analysis of likely voters suggests that the diversity is unlikely to be reflected at the polls on Election Day.

The voting-age population of the district is less than 50% White -- which closely matches the ethnic diversity of the city as a whole. Yet, more than 80% of voters who have voted in at least two Democratic primaries in the last eight years live in census blocks where White residents make up the largest share of the population, according to data from the Center for Urban Research at the City University of New York.

If those trends continue, the election will be largely decided by people who live in majority White neighborhoods, said John Mollenkopf, the center’s director.

The district was formed after a chaotic, court-ordered redrawing of congressional lines. It has attracted a crowded field of a dozen Democratic candidates seeking to draw on these voter groups for support in an Aug. 23 primary election that will decide who some of the most liberal areas in the US sends to Washington.

Those high-propensity voters could be the deciding factor in a primary election with low expected turnout. While early voting begins on Aug. 13, the primary election is being held in the dead of August when many New Yorkers are taking summer vacation.

“This is the first time we’ve ever had a primary in August in New York,” said former US Representative Liz Holtzman, 81, who’s plotting a return to politics after serving in the House from 1973 to 1981. “This is a way to ensure democracy? To make it hard for people to vote? I don’t think so.”

The field is also crowded. In addition to Holtzman, the 12-candidate race includes: Dan Goldman, 46, an heir to the Levi Strauss fortune and congressional attorney in the impeachment trial of former President Donald Trump; Yuh-Line Niou, 39, a Taiwanese-American immigrant elected to the state Assembly in 2016; Mondaire Jones, 35, among the first openly gay members of Congress who moved to Brooklyn from the Rockland County district he currently represents; and Carlina Rivera, 38, a Manhattan City Council member of Puerto Rican descent.

It’s a race so packed that former Mayor Bill de Blasio, -- a man who just three years ago was running for president -- dropped out, saying “people are looking for another option.”

The district leans Democratic by 69 percentage points, according to FiveThirtyEight. So the outcome of the primary is less a national bellwether than an indication of the direction of the Democratic party -- and whether it can energize diverse communities with a progressive agenda or look to the center to broaden its appeal.

Among the top contenders, White voters could help prop up Goldman, the Yale and Stanford University graduate and multimillionaire who typifies the “high-propensity, upper-middle-class professional White voter” that makes up the backbone of the district, Mollenkopf said. That could boost Goldman “to the extent that people vote for people who are like them.”

Goldman’s anti-Trump credentials also appeal to voters like Michael Weiss, who was recently shopping for fruit at what’s turned into a campaigning hot spot for the NY-10 race: The Park Slope farmers market.

“It’s because of his record with the impeachment,” said Weiss, a long-time Brooklyn resident.

Goldman also enters the final stretch with a huge money advantage, having more than $2.4 million in television time already reserved -- three times more than every other candidate combined.

He’s sunk $1 million from his personal fortune into his campaign, a decision that drew ire from competitor Rivera during a televised debate on Wednesday night when she called him “a walking campaign finance loophole” who was trying to “buy the election.”

Goldman said he used his own money for campaigning so he could spend more time talking to voters, rather than to donors. He hit back at Rivera for “selling the seat” by taking money from corporate and real estate donors.

But Goldman is the only leading candidate who has never held elective office. That leaves room for a more established politician to build a coalition, said Ross, the senior strategist with New York Immigration Coalition Action.

“This district has a lot of ideological fault lines. There are voters who vote for more traditional Democratic liberal candidates. And there are other, younger voters who are more progressive,” Ross said.

Even if White voters make up the vast majority of likely voters, a candidate can still put together a winning coalition by holding on to their natural base of support while appealing to White voters. “The ethnic block-voting factor is important,” he said.

Rivera, who is Latina, is well known in the Manhattan portion of the district, which she represents on City Council, and is particularly popular with progressive voters there.

Jones, one of the first gay Black members to serve in Congress after he was elected two years ago, has effectively bridged his party’s liberal and progressive wings and could benefit from high name recognition -- if he can get voters to overlook the fact that he’s a transplant to the district.

And Niou, who is even more progressive, has been a mainstay in Chinatown and Lower Manhattan for over a decade, where she made headlines during the pandemic for helping her constituents and organizing rallies against anti-Asian hate crimes. She also has endorsements from the Working Families Party, Public Advocate Jumaane Williams, and Marcela Mitaynes, a fellow lawmaker who is an influential voice among Democratic Socialists.

The election will be “won by inches,” said Niou, at a recent campaign event near Brooklyn’s Prospect Park.