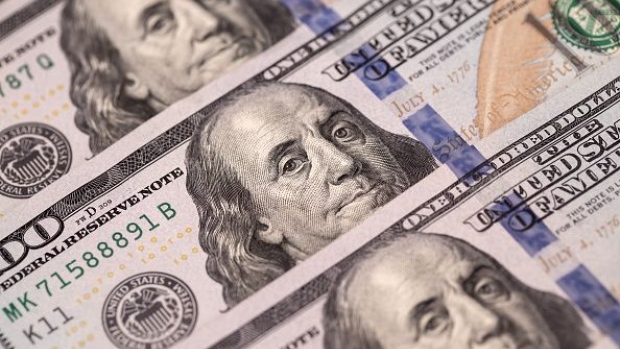 U.S. one-hundred dollar banknotes are arranged for a photograph in Hong Kong, China, on Thursday, April 23, 2020. The Hong Kong Monetary Authority intervened for a third straight day this week to defend its currency peg as the local dollar touched the strong end of its trading band. , Photographer: Bloomberg/Bloomberg

(Bloomberg Opinion) -- The year 2020 will be remembered for any number of things, including how wrong so many were about so much. From the pandemic to the election, and from the economy to financial markets, prognosticators did a horrible job.

When it comes to Wall Street, it’s easy to see why so few got it right. Coming into the year, not a single strategist had “global pandemic, 1.5 million deaths worldwide, the worst economic downturn since the Great Recession, a 34% market crash and subsequent rebound led by a handful of tech stocks” in their 2020 outlooks. But “tail risk” events, whether they be wars, natural disasters or pandemics, regularly upend the even the most logical of forecasters.

There are lessons in the deductive reasoning errors and faulty data analyses, no matter what the field, that can lead even the savviest market participants astray. Let’s consider three examples from the U.S. Presidential election and what they mean for investors.

Beware Coincidence: Money-making “insights” materialize regularly in the firehose of daily market data. Upon closer analysis, most turn out to be a mirage. Determining if these indicators are based on good logic can help an investor avoid losses.

Consider this fact: Since 1928, whenever the S&P 500 Index has risen in the three months prior to a presidential election, the party that controlled the White House won 90% of the time. Julian Emanuel, the chief equity and derivative strategist for BTIG LLC, seized upon this idea in mid-October, saying this and other market data suggest polls may be “underestimating the probability of President Trump getting re-elected.” And he wasn’t the only one to spotlight this datapoint.

In the three months prior to this year’s election, the S&P 500 rose 2.3%. Annualized, that is a gain of more than 9%, which is about average for any given year. Even so, the incumbent lost.

The problem with this indicator is that both variables occur quite frequently: Markets tend to go up most of the time, about three out of every four years(1), and incumbent presidents tend to win re-election – 33 out of 44 prior to Trump. If both of these outcomes occur about 75% of the time, it is more likely that their simultaneous occurrence is coincidental and not predictive. It is a form of denominator blindness, where analysts use data without context.(2) The six-for-six track record is more likely just a reflection of how common each is.(3) Failing to recognize this leads to a misreading as prescience instead of coincidence.

Don’t Confuse Luck With Skill: Most pollsters failed to accurately predict the 2016 election, but the Trafalgar Group nailed it. Robert Cahaly’s firm had the most accurate polls in seven swing states: Florida, Pennsylvania, Michigan, North Carolina, Ohio, Colorado and Georgia. Trafalgar even accurately predicted the number of Electoral College votes – 306 – that Trump would garner.(6)

Trafalgar’s success led many to take note when Cahaly foresaw another Trump win in 2020. He predicted so-called shy Trump supporters would propel him to an Electoral College victory in the high 270s to low 280s, with wins in North Carolina and Florida as well as in Arizona, Georgia, Michigan, Nevada and Pennsylvania. Cahaly got the first two right and the last five wrong, leading to a Trump loss. The popular vote also went to challenger Joe Biden, who received some seven million more votes than the incumbent, leading to 306 Electoral College votes versus 232 for Trump.

A better explanation than “shy voters” may be how party affiliation impacted individual responses to the pandemic. Biden supporters were more likely to be in white collar, work-at-home jobs than Trump supporters, and therefore more easily reachable on landlines (computer generated polling does not call mobile phones). Trump supporters were more likely to work outside the home or generally be out and about.(5) Those two factors emerge as a likely source of the undercount of Republicans in the 2020 polling.(7) Thus, if data analyst Nate Silver is correct, Covid-19 led directly to pollsters oversampling Democrats.

Investors should be wary of following the advice of pundits and fund managers who get one big call right. Instead, they should attempt to figure out if those pundits or fund managers are uniquely skillful or just got lucky. Untangling skill from luck is always challenging.

Consider the Counterfactual: In one of its post-election autopsies, the Financial Times wrote this: “Money can’t buy you votes: Democratic cash yields meagre returns.”(8) To make that claim, one must show the same election results without any monetary advantage. That is impossible.

The counterfactual mental model has you ask, “What would the outcome have been without this factor?” Developed by 19th century Prussian mathematician Carl Gustav Jacob Jacobi, counterfactuals require varying your perspective.  A good example comes from strategist Matt Bennett, of the think-tank Third Way, who observed “If you don’t have money, you’re likely to lose, but if you do have money, you’re not certain to win.” In logic and mathematics, this condition is described as “necessary but not sufficient.”

A surge in 2020 Democratic spending might have been the difference in the five states that flipped from 2016: Wisconsin, Michigan, Pennsylvania, Georgia and Arizona. But that necessary advantage was insufficient in Florida, with its diverse population and complex political landscape.

Investors tend to see the world in terms of results rather than processes. We assume identifiable causes leads to specific and measurable effects. The world is far messier and more complex than that. Forgetting this can lead to fundamental errors in our thinking, and costly errors in our portfolios.

(2) Consider also that three months of market action do not reflect the Electoral College, with all of its complexities and regional variations.

(3) There were six examples of a falling S&P 500 three months prior to a presidential election, and all sixfit the thesis. It is also noteworthy that this is too small a sample to base any conclusion.

(4) 306 or 304? Electoral College votes sometimes are off from the state-by-state resultsdue to “faithless” electors.

(6) One could also note that during a pandemic, Trump’s criticism of mail-in voting very likely discouraged his own supporters from using mail-in ballots. This could have impacted the final results, suggesting it was less of a shy Trump voter and more of a tactical election error by the President that was not picked up by Trafalgar.

(7) Annie Duke describes this as “resulting” – considering the outcome instead of the probabilities.