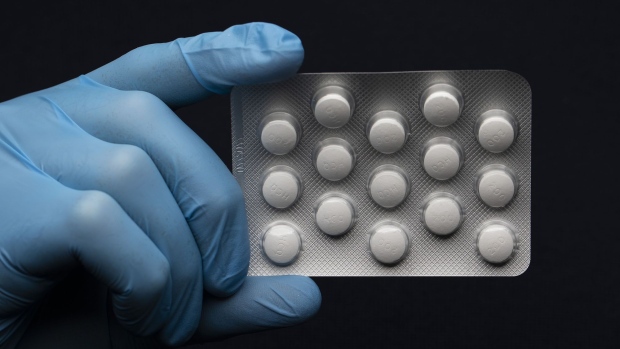 LONDON, UNITED KINGDOM - MARCH 26: In this photo illustration a pack of Hydroxychloroquine Sulfate medication is held up on March 26, 2020 in London, United Kingdom. The Coronavirus (COVID-19) pandemic has spread to many countries across the world, claiming over 20,000 lives and infecting hundreds of thousands more. U.S. President Donald Trump recently promoted Hydroxychloroquine, a common anti-malaria drug, as a potential treatment for COVID-19 when combined with the antibiotic azithromycin. “HYDROXYCHLOROQUINE & AZITHROMYCIN, taken together, have a real chance to be one of the biggest game changers in the history of medicine,” President Trump tweeted last week. (Photo by John Phillips/Getty Images) Photographer: John Phillips/Getty Images Europe , Photographer: John Phillips/Getty Images Europe

The steering committee decided to suspend enrollment to that arm of the so-called Solidarity trials, WHO officials said Monday. That’s after the Lancet published a study that said the drug, touted by U.S. President Donald Trump as a treatment, was linked to an increased risk of death and heart ailments.

“It’s important to continue to gather evidence on the efficacy and safety of hydroxychloroquine,” WHO Chief Scientist Soumya Swaminathan said at a press briefing in Geneva. “We want to use it if it’s safe and efficacious, reduces mortality, reduces the length of hospitalization without increasing adverse events.”

The studies may resume if data warrants, Mike Ryan, head of the WHO’s health emergencies program, said at a briefing. There’s no signals from the Solidarity trials that indicate any problem and the decision was made out of an “abundance of caution,” Ryan said.

The safety monitoring board will meet again and the decision will be reviewed in the next week or two, Swaminathan also said.