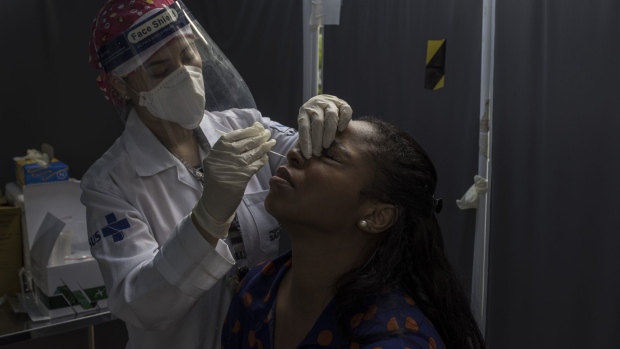 A resident receives a Covid-19 swab test at a testing and vaccination site in Sao Paulo, Brazil, on Friday, Jan. 14, 2022. Brazil reported the biggest one-day increase in cases since Sept. 18, with 112,286 new cases in 24 hours. , Bloomberg

(Bloomberg) -- A study in South Africa indicated the omicron variant could help cut the future severity of the virus. Still, the World Health Organization warned that comprehensive strategies are still needed to reduce transmission and severe disease.

The greater Tokyo region and other parts of Japan are set to come under a state of quasi-emergency for three weeks starting Friday. Hong Kong is culling thousands of small animals, after nearly a dozen imported hamsters were found to be infected with the delta variant and are suspected of having spread the virus to humans.

The U.S. Postal Service opened access to a website that allows households to order free at-home tests. The Covid wave in New York City is slowing, with cases and hospitalizations dropping dramatically from a peak in early January and remaining concentrated among those unvaccinated.

Dozens of Venezuelan lawmakers tested positive for Covid-19 Tuesday amid a wave of new infections in the country, delaying the start of a meeting of congress.

Forty-two members of the National Assembly tested positive for the disease on Tuesday ahead of a meeting of the legislative body, according to three members of congress. Another 20 were already out after testing positive last week, they said.

The Grammy Awards will be held in Las Vegas on April 3, after a previously scheduled ceremony in Los Angeles was indefinitely delayed because of the pandemic. The music industry’s top honors were originally set for Jan. 31.

The entertainment industry is moving quickly to adjust its annual awards season due to the surge of the omicron variant. The Oscars have been postponed by one month until late March. The Palm Springs International Film Festival was canceled, while the Sundance Film Festival switched to a virtual format.

Hospital occupancy rates are climbing fast in Mexico City as the country sets new daily records for infections. Since Jan. 3, occupancy levels have doubled to 58%, according to a federal data base.

The capital is registering about 7,000 daily cases, city authorities said, well past the peaks seen in other waves. Though hospitalizations are increasing, most patients aren’t showing serious symptoms and are mostly staying off ventilators. Some 225 patients are currently on assisted breathing machines.

A record of more than 200,000 people in Switzerland are in quarantine or isolation after testing positive or coming into contact with a person infected with Covid-19.

The fast-spreading omicron variant is responsible for about 90% of new cases in the country of about 8.5 million people and has forced the largest number of residents into isolation since the pandemic began two years ago, government officials said.

The U.S. Postal Service opened access to a website that allows households to order one set of four free at-home Covid-19 tests. Each household is limited to one order, with kits expected to begin shipping later this month. The site is part of a push by the Biden administration to increase access to at-home tests, which have been in short supply since the start of the omicron surge last month.

Omicron won’t be the last variant, and comprehensive strategies are still needed to reduce severe disease, deaths and transmission, according to Maria Van Kerkhove, the WHO’s technical lead officer on Covid.

She said at a briefing on Tuesday that countries shouldn’t abandon well-established, life-saving interventions, such as social distancing, mask-wearing, good ventilation and avoiding crowds.

Bruce Aylward, senior adviser at the WHO, said that if countries give up, “there’ll be more transmission, more infections, more mutations and more risk in terms of variants. There are consequences, additional risks if you throw in the towel. We don’t understand all of the consequences of letting this thing run, so we really want to reduce transmission as much as possible.”

The daily number of cases dropped to 17,296 over the last week, down from a peak of 42,576 on Jan. 3. Despite the decline, cases remain elevated from October and November, when infections were hovering around 1,000 a day. Chokshi said the cases and hospitalizations remain concentrated among unvaccinated New Yorkers.

Technology vaccine hubs need to be created as the current mechanisms for vaccine manufacturing aren’t conducive for producing equity, a World Health Organization official said at a virtual WEF event on Tuesday.

“If we have a system to produce enough vaccine, then tell me why the people who need it are not receiving it,” said Mike Ryan, head of the WHO’s health emergencies program. “We have a responsibility to come out of this pandemic with the skills and infrastructure to be ready for the next one.”

A laboratory study in South Africa that used samples from 23 people infected with omicron in November and December showed that while those who previously caught the delta variant can contract omicron, those who get the omicron strain can’t be infected with delta, particularly if they’ve been vaccinated.

While omicron is significantly more infectious than delta, hospital and mortality data in countries including South Africa -- the first to experience a wave of omicron infections -- appear to show that it causes less-severe disease.

The greater Tokyo region and other parts of Japan are set to come under a state of quasi-emergency for three weeks starting Friday as the government tries to rein in a surge in the virus. A final decision will be made Wednesday for the 13 prefectures including Tokyo.

If approved, the measure will allow the local government to request limits on gathering and hospitality operations. Tokyo and neighboring areas are discussing restrictions on serving alcohol, asking restaurants and bars to shorten opening hours and requiring testing of all participants at large events, broadcaster NHK reported Tuesday.

The oil-rich capital of the United Arab Emirates has made booster doses mandatory for entry as the Gulf nation battles a renewed surge of infections driven by the omicron variant. Starting this week, people traveling to Abu Dhabi will need to have booster doses to enter unless exempted by the authorities.

It wasn’t immediately clear if the latest requirement also applies to neighboring Dubai, which has generally had fewer restrictions through the pandemic.

Thailand will propose reviving the government’s quarantine-free entry program for vaccinated travelers in February as the situation around the outbreak of the omicron strain remains manageable. The Health Ministry will also propose to the main Covid-19 task force that the alert level for the country be lowered to three from four.