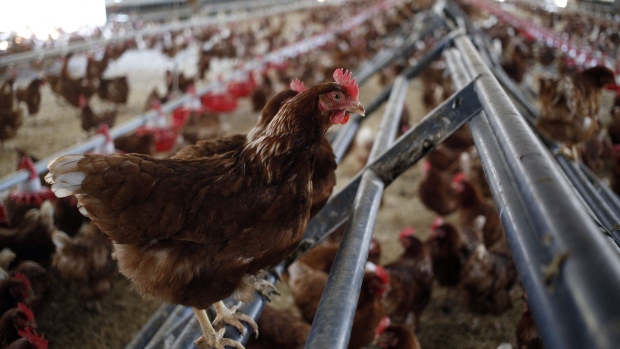 Chickens inside a barn at a farm in Pleasureville, Kentucky, U.S., on Wednesday, Jan. 8, 2020. Congress had authorized additional borrowing authority for the U.S. Department of Agriculture in coronavirus-relief legislation passed earlier this year, and the second round has been widely anticipated. Photographer: Luke Sharrett/Bloomberg , Bloomberg

(Bloomberg) -- The biggest chicken producers in the U.S. will have to overhaul their breeding programs in a matter of just a few years to meet tough new guidelines major customers are embracing, part of a movement to ensure birds are healthier and more humanely treated.

The Global Animal Partnership, an animal welfare certifier whose five-step method is championed by Amazon.com Inc.’s Whole Foods, is set to lower the number of breeds that meets its standards. According to people familiar with the process, it’s virtually impossible for any conventional chicken breeds, which make up more than 90% of U.S. production, to make the cut due to their performance in a study that informed the results.

While the new rules don’t go into effect until 2026, the move could drive changes in the industry with over 200 companies including Popeyes Louisiana Kitchen Inc. and Chipotle Mexican Grill Inc. promising to transition to breeds that meet GAP’s standards.

The interest in more humane chicken breeding has emerged as problems cropped up with commercial broilers in recent years. The chickens that most of the world eats grow at lightning speed and prodigiously convert feed into protein. That’s made meat cheaper and more accessible to more people. However, high productivity had trade-offs. A two-year study commissioned by GAP had preliminary results seen by Bloomberg that concluded the world’s most ubiquitous chickens had poor welfare outcomes due to genetics. The birds sat for most of their lives, had more foot injuries and more problems like white strips of fat and tough, woody textures throughout their muscles. Their bodies grew faster at times than their organs, resulting in small lungs.

In the preliminary data, 77% conventional chickens that were 48 days old had woody breast, which is a tough, gristly texture, and two-thirds had white striping, which involves excess strips of fat in the meat. Slow-growing breeds, by comparison, clocked in at 12% and 6%, respectively, in the study.

“We’re driving toward super efficient, lots of muscle mass. But the birds themselves have problems,” Anne Malleau, executive director of GAP said in an interview about the project, before Bloomberg obtained the study. “Woody breast and white striping are relatively new muscle myopathies. Because of the selection, we’ve changed the muscle fibers. It’s a consequence of the selection that we’re seeing these muscle problems.”

GAP will release its new standards and updated breed list in the coming weeks. The chicken breeds certified by GAP will drop from 27 to a much lower number, which will rise as more breeds are tested. The group requires audits on all farms in the program every 15 months.

Read more: After Decades of Breeding Bigger Birds, Some Producers Are Shrinking the Chicken

Consumers have become increasingly interested in animal welfare, and more than ever are willing to pay for food with ethical claims. But because the costs of producing slow-growing birds are substantially higher than industrial chickens, breed changes on a large scale could lead to more expensive meat across the board. Whether consumers will accept that remains to be seen. “Everyone is going to have to make a decision that’s best for their family, but there are also wider implications,” Malleau has said of the higher costs. “There’s an ethical decision that we need to make, where we’re paying a little bit more for chicken and it means that these birds have a better life.

Any changes would take time. The vast majority of chicken genetics is for industrial birds, and controlled by two companies, Tyson Foods Inc.-owned Cobb-Vantress and Alabama-based Aviagen. Tyson is the biggest American meat producer. Breeding is a slow process that takes years, by selecting desired traits over multiple generations of birds.

Cobb-Vantress said it evaluates more than 50 traits in its selection program, and more than half of them are related to improved health and welfare. Trevor Ries, a senior marketing manager at Cobb, also said the study commissioned by GAP was flawed.

“Conventional breeds were overfed protein, under ventilated and our recommendations for hatching were not followed,” Ries said. That “resulted in issues that do not reflect what today’s commercial chicken farming operations are really experiencing.”

A representative for Aviagen declined to comment on the study.

GAP has powerful backers. Whole Foods, which uses the program for its 365 brand, said it will comply with the new breed list when it’s released.

“We are aware of--and supportive of--GAP’s commitment to slower-growing broiler breeds,” a Whole Foods spokesman said in a statement. “Once that list is finalized, we will start working toward those breeds with GAP’s recommendation.”

Some chicken producers are already making moves to adjust to the higher standards.

Perdue Farms Inc., the fourth-biggest U.S. chicken producer, has been preparing for an updated breed list for five years. In 2016, it began experimenting with heritage and hybrid breeds, which aren’t as susceptible to muscle problems like woody breast. The company has tested 15 different breeds so far.

Bruce Stewart-Brown, the senior vice president of technical services and innovation at the company, said the mounting concern around breeds will become as big as the movement to antibiotic-free chicken that started 20 years ago.

“As they identify those new breeds, and if we’re going to raise GAP birds, then we have to evolve to the breeds of their new standard,” he said in an interview.

Breed issues have been front and center lately because a line of roosters owned by Cobb-Vantress was found to have fertility issues that rippled throughout the industry, causing losses for Tyson and also affecting U.S. output at a time when chicken demand is increasing rapidly.

Some scaled-up alternative breeds have already emerged. Cooks Venture, an Arkansas-based producer and genetics company, developed a breed over 12 years with heritage lines. Chief Executive Officer Matt Wadiak said the company’s largest asset is genetics, which they intend to sell to other companies to help meet slow-growing bird commitments.

“The often suggested idea that the only choice we have to feed people at scale must come at the expense of animal welfare, and lack of genetic diversity, is simply wrong,” he said.