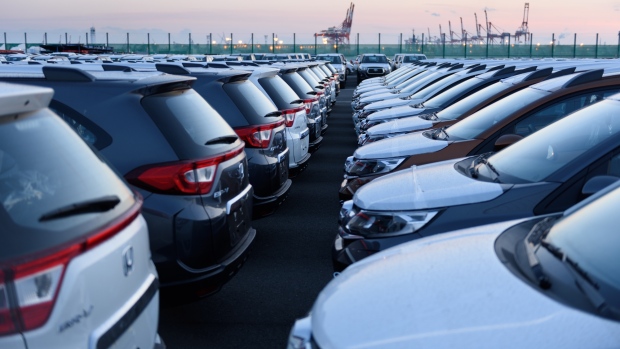 Toyota Motor Corp. vehicles and Honda Motor Co. sport utility vehicles (SUV), foreground, bound for shipment sit at a port in Yokohama, Japan, on Monday, Feb. 18, 2019. Japan is sticking to its view that the U.S. won’t apply higher tariffs on imports of Japanese cars and auto parts so long as negotiations toward a trade deal continue, according to Tokyo’s lead negotiator with Washington. Negotiations over a trade deal announced last September by Trump and Abe have yet to start, partly due to ongoing talks between Washington and Beijing. , Bloomberg

OTTAWA - Statistics Canada reports wholesale sales rose 1.8 per cent to $65.2 billion in January, boosted by the motor vehicle and motor vehicle parts and accessories and the miscellaneous subsectors.

Economists had expected a decline of 0.1 per cent for the month, according to financial markets data firm Refinitiv.

The January results come ahead of what is expected to be a sharp downturn in the economy due steps taken to slow the spread in COVID-19.

Statistics Canada says sales in the motor vehicle and motor vehicle parts subsector grew 3.0 per cent to $11.3 billion in January.

Meanwhile, the miscellaneous subsector climbed 3.1 per cent to $8.4 billion, boosted by the agricultural supplies industry which increased 10.5 per cent.

In volume terms, wholesale sales grew 1.7 per cent in January.