Why a rapid change is on the horizon for American cannabis - BNN Bloomberg
{{ currentBoardShortName }}
Markets
As of: {{timeStamp.date}}
{{timeStamp.time}} 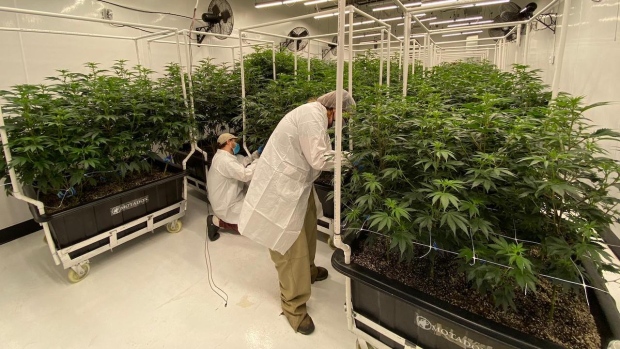 A look inside one of Fiore’s facilities. , Image courtesy of Market One Media

This is a time of massive change — and rapid growth — in the U.S. cannabis market. With cannabis legalized in more states than ever before and the Biden-Harris presidency poised to transform the federal regulatory environment in this newly burgeoning sector, many are looking forward to what the industry could look like as it matures.

One way to find out is to look back. With Canada as the only example of nationwide legalization in a developed country, legalization here holds many examples of directions the industry should — and should not — take stateside. One company capitalizing on those insights is Fiore Cannabis (CSE: FIOR | OTCQX: FIORF), a Canadian-listed company that is a U.S. multi-state operator with a unique focus on the Nevada and California markets.

“We’ll be taking lessons from Canadian legalization and applying them down in the U.S. to become a thought leader and consolidator.”

Based on population alone, the U.S. market has the potential to become exponentially more profitable than Canada’s, especially with new legislation coming to fruition, like the SAFE banking act, which will give cannabis-sector companies access to big-bank investment capital. Along with decriminalizing cannabis at the federal level, these new legislative developments represent the tearing down of the last barriers to the explosion of the U.S. cannabis market.

Fiore’s President and CEO, Erik Anderson, is confident that Fiore’s experience in Canada will serve it well in its focus on prime U.S. markets.

“Everybody was throwing money into the cannabis sector,” he shares on the Canadian cannabis boom. “There was a lot of speculation, and somewhere along the line the business fundamentals were forgotten.”

With a focus on dominating the Nevada and California markets, Fiore is working towards vertical integration and already has multiple profitable brands in market across cultivation, production and retail. To hone in even further on Nevada and California, Fiore made the decision to sell their licenses and non-core assets in Washington and British Columbia.

Despite the challenges of the pandemic, Green Leaf Wellness, the company’s Palm Springs retail dispensary, experienced a 15 per cent jump in sales thanks to clever pivots including delivery service, an express pickup window, and partnerships with local therapeutic organizations like yoga centers and wellness retreats. To support Fiore’s goal of vertical integration, the California retail location will soon be complemented by a cultivation facility.

In Nevada, by contrast, Fiore’s efforts are currently focused on cultivation — their seven-acre facility north of Las Vegas has been generating revenues since early 2019. Here, the company’s next move will be a retail location to capitalize on this immensely profitable market.

With a management team and Board of Directors made up of Canadian cannabis industry veterans, Fiore is poised to take full advantage of this watershed moment in American cannabis. The company’s leadership boasts vast experience in the Canadian market dating back to 2013, and Anderson is optimistic about their talent and ability as the company focuses on the U.S.

“All our people are young entrepreneurs with tons of Canadian cannabis experience,” he elaborates. “We’ll be taking lessons from the Canadian legalization experience and applying them down in the U.S. to become a thought leader and industry consolidator.”

State markets to watch — and build in

It’s not by chance that Fiore has focused on Nevada and California: It’s because these markets easily outstrip all of Canada in profitability. Whereas an estimated 5 million Canadians consume marijuana (as of 2019), roughly 50 million people fly into the city of Las Vegas alone every year. Not only is this figure greater than Canada’s entire population, an exponentially larger proportion are looking to consume marijuana.

“You’ll note that the retail dispensaries in Las Vegas are lined up at 10:30 at night for half an hour just to get inside. They offer way more products, way better branding and they offer higher priced products,” says Anderson.

Nevada is also a closed market: only 60-80 cultivation and retail licenses have been distributed to the entire state, compared to thousands in states like Washington and Colorado.

Fiore is in the process of expanding their Apex production facility north of Las Vegas, implementing LED lights and their proprietary organic grow methodology developed in the Canadian market.

In the future, Fiore will secure funding to expand the facility significantly and add a full suite of extraction capabilities for the production of edibles, concentrates and vape products under their Diamante brand. The company expects to see revenues grow more than fivefold after the planned expansions are completed.

Furthermore, Anderson feels that lesser government intervention in the U.S. market results in a better-quality product. “In California and Nevada, we see superior genetics cultivated by multi-generational families that have been farming cannabis for the better part of the last 100 years,” he says.

“It’s a very craft, artisan, high-end approach similar to wine, unlike the limited genetic strains available in the Canadian marketplace.” Thanks to the company’s superior farming processes and appreciation for organic craft cannabis, the company is able to bring high-quality, high-THC products to market at prices 50 per cent higher than the Nevada state average.

A watershed moment in cannabis

Fiore’s investment into American cannabis is strategically timed. With the industry on the brink of major changes under the new Biden-Harris presidency, investors are expecting a bull run similar to that seen in Canada leading up to its nationwide adult recreational legalization.

President-Elect, Joe Biden, himself has made his stance on cannabis clear, expressing that the plant should be decriminalized and those convicted of possession see their records expunged — sentiments shared by his VP-Elect, Kamala Harris.

Their stance is backed up by exciting new legislation. The SAFE Banking Act will prevent banking institutions from blacklisting cannabis-related businesses, and other bills like the Marijuana Opportunity Reinvestment and Expungement (MORE) Act, and the Strengthening the Tenth Amendment Through Entrusting States (STATES) Act will further strengthen the sector and effectively decriminalize cannabis federally in the U.S.

Their implications are far-reaching, and Anderson, like many industry players, is optimistic. “Only 2 per cent of U.S. cannabis has received institutional investment,” he says. “With decriminalization expected within two years and the potential of nationwide legalization, we’re looking at a huge bull run for profitable U.S. multi-state operators.”

In anticipation of the changing market, Fiore’s growth is carefully planned — and rolling out as anticipated. By leveraging their board and management’s expertise, Fiore is already delivering on its strategic short-term goals. Next up, the company’s revenue projections show positive cashflow throughout 2021, which Anderson attributes to their focus on implementing sound business fundamentals and marketing high-margin, high-value products.

Despite the enormous changes on the horizon, the American cannabis market remains highly competitive. In this landscape, being business savvy alone won’t cut it, nor will exceptional product; both are necessary in order to stand out from the crowd.

As a cultivator of top-shelf, Cannabis Cup-winning flower that also boasts sound business practices and a clean balance sheet, Fiore is the rare company to master this balance. Investors can certainly look forward to organic growth and expansion mixed with accretive M&A opportunities as well as a cash flow positive operation (Q4 2021 – January to March) in Nevada and California.

To learn more about Fiore Cannabis, visit their website here.