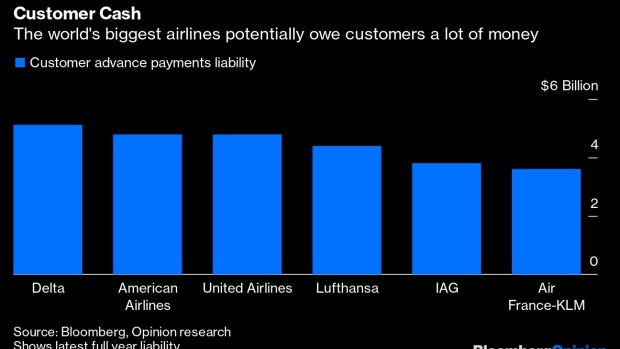 (Bloomberg Opinion) -- In documents published alongside Carnival Corp.’s $6.25 billion debt and equity offering last week, the beleaguered cruise ship operator showed why it might not keep much of that cash for long.

Carnival held $4.7 billion in customer deposits at the end of February for trips that passengers paid for in advance but hadn’t yet taken. Because their cruises have been cancelled amid the coronavirus outbreak, many customers will want their money back. As such, Carnival could soon find itself short of cash again.

Carnival’s predicament is shared by hundreds of travel, airline, sports, education and entertainment businesses — all of which depend on advanced payment from customers to fund their operations. People probably don’t realize it, but when they pay for a ticket months in advance they’re effectively extending these companies an interest-free loan. The world’s airlines might have to repay $35 billion in customer cash during the next three months, according to industry body IATA; the largest of these companies each held close to $5 billion in customer advance payments at the end of December, corporate filings show.

What happens to this customer money is a hugely important question that could determine whether businesses will remain solvent or will need a government bailout. Tour operator Tui AG, for example, secured a 1.8 billion-euro ($1.9 billion) rescue loan from the German government last month, even though it had taken in about 2.9 billion euros of advance payments from customers — it had spent much of this cash.

There are sound reasons why companies should be allowed to hold onto customer money: Taxpayers would foot a rescue bill, which doesn’t seem very fair when it’s estimated that just 15% of Brits take 70% of the country’s international flights.

By pulling their cash out now — rather than waiting for rescheduled holidays, flights and events, or accepting a credit voucher to book a future alternative — customers’ risk destabilizing businesses that they admire and depend upon.

But it’s essential too that customer money is adequately protected and people who urgently need their money back, such as those who’ve recently lost their jobs, can get it.

That’s why there’s such disagreement around the travel industry’s preferred solution to the problem: the credit voucher. Like the airlines, Carnival hopes that people will accept these to put toward a future trip in lieu of cash. So far about 45% of customers have chosen this option. But the travel industry is worried that this voluntary uptake isn’t enough. Hence it is furiously lobbying governments to allow companies to insist on making the vouchers non-optional.

This would require the suspension of consumer protection laws. While governments like Germany and the Netherlands are sympathetic to their domestic companies’ plight and are encouraging the use of vouchers, the European Union and the U.S. have held firm, saying that if customers want their money back, they should get it. They worry that if a company goes bust, customers with vouchers would join a long queue of unsecured creditors.

There are other ways for consumers to get their money back if a company goes bust. Some travel insurance policies will pay out for an insolvency, as will credit-card processors. Still, the safest way to protect your money is to not allow a distressed company to keep the cash in the first place.

In the hope that governments will come round to their point of view, some airlines have reportedly been complicating the refund process for customers. By stonewalling, they’re able to keep the cash a bit longer but at the cost of alienating customers and travel agents.

A much better approach is to offer customers an incentive to take the voucher option. Finnair Oyj customers can get vouchers worth 10% more than their cancelled booking.

To make sure holidaymakers can get their money back when needed or are protected in the event of a company’s collapse, governments also need financial safety nets and insolvency guarantees. Germany has proposed something like this, without providing details. It also plans a hardship clause for customers that can’t afford to accept a voucher. As an alternative, governments might consider a travel emergency fund to cover reimbursement of flights and other services so businesses don’t immediately have to foot the bill.

By taking a voucher, customers can help prevent scores of unnecessary insolvencies. But they mustn’t be punished for showing a little love.