Why Algernon Pharmaceuticals could have the leading therapeutic drug for the COVID-19 pandemic - BNN Bloomberg
{{ currentBoardShortName }}
Markets
As of: {{timeStamp.date}}
{{timeStamp.time}} 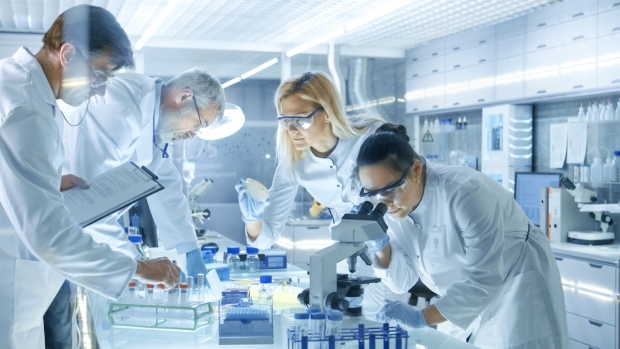 Algernon Pharmaceuticals has been hard at work repurposing Ifenprodil for those affected by idiopathic pulmonary fibrosis, chronic cough, as well as COVID-19. , Market One Media

In mid-January, scientists published the genetic sequence of the coronavirus, thought to be behind the outbreak of a new form of pneumonia. Not long after, the hunt for a potential coronavirus vaccine began.

Fast forward 11 months, and a vaccine could soon be a reality.

On November 20th, Pfizer sought emergency use authorization from the U.S. FDA (Food and Drug Administration) for its COVID-19 vaccine. Then, on November 30, Moderna applied for emergency approval from U.S. and European health regulators for its version of the vaccine.

This was welcomed news, especially in North America and large parts of Europe, which have been hit hard by the second wave of the pandemic.

The company is currently focused on Ifenprodil, a drug that was developed by Sanofi in the 1970’s. The drug has been used in France in the treatment of peripheral arterial obstructive disease and later in Japan and South Korea for the treatment of vertigo.

“We’re hopeful that if we have positive, trending interim data, (COVID-19 trial) that we can expand our research.”

Ifenprodil is what’s known as an NMDA-receptor antagonist. In other words, it binds with certain receptors that are on the surface of specific cells within the body.

After reviewing an independent study published by the American Society of Microbiology in mSystems in its December 2019 issue, Algernon saw how Ifenprodil significantly reduced acute lung injury and improved survivability in an animal study with H5N1 infected mice. H5N1 is the most lethal form of influenza known to date with an over 50 per cent mortality rate.

And since one possible complication of COVID-19 is pulmonary fibrosis (PF), a serious lung disease where the lungs get scarred, the drug could create excitement in the pharmaceutical community, especially if it passes through all stages of clinical trials.

After seeing promising results from animal studies, the company began the process of preparing to apply for U.S. FDA and Health Canada approvals for a human Phase 2b/3 clinical trial in March.

Fast forward to today and the company is running two separate Ifenprodil trials: A COVID-19 Phase 2b/3 multinational trial in the U.S., Australia, the Philippines, and Romania; and a Phase 2 trial for IPF and chronic cough in Australia and New Zealand.

A recent report by data analytics company GlobalData shows that the IPF market is expected to be valued at USD$3.6 billion by 2029, compared to USD$2.5 billion in 2019. This is a fruitful market for Algernon to be tapping into, especially as the company is seeing encouraging results from its human trials.

NEWS RELEASE: We have enrolled the final patient in our multinational Phase 2b/3 study of Ifenprodil for COVID-19! Join...

“I think everyone should be very pleased with the progress that pharmaceutical companies are making on the vaccines,” says Moreau. “But a vaccine is also specific to a particular pathogen.”

“The COVID-19 vaccines won’t work for everyone or for future variations of the virus, which is why there needs to be a combination of vaccines, antibody therapy and ‘go-to therapeutic drugs’ to help reduce the damage caused by this kind of an infection,” he explains.

At the moment, there aren’t many therapeutic options available to doctors for treating COVID-19 patients.

In a recent study from the WHO, published in the New England Journal of Medicine on December 2, 2020, four repurposed anti-viral drugs, remdesivir, hydroxychloroquine, lopinavir, and interferon beta-1a tested in hospitalized COVID-19 patients showed little to no effect. The study concluded that none of the drugs definitely reduced mortality, overall or in any subgroup, or reduced initiation of ventilation or hospitalization duration.

“An NMDA-receptor antagonist like Ifenprodil could be acting as host-protector. Our current study is trying to determine if Ifenprodil is protecting the lungs in hospitalized COVID-19 patients,” explains Moreau.

Moreau and his colleagues are hoping to learn that Ifenprodil can protect the lung and reduce the severity and duration of a COVID-19 infection.

“We also need to know if it’s not only reducing the inflammation, but also reducing the cytokine storm that overwhelms the lungs.”

For patients suffering with COVID-19, this would mean that they’re getting less sick, spending less time in the hospital, and avoid being hooked up to mechanical ventilation. “And obviously, that they’re going home earlier than if they didn’t take the drug,” Moreau adds.

Algernon just announced that the final patient has enrolled in the Phase 2b part of its multinational Ifenprodil for COVID-19 trial. It’s a 150-patient trial but the aggregate total is 168, taking into account that some people will drop out. The study consists of two weeks of treatment, followed by a two week follow up.

There are three arms to the study:

“At the end, we’ll be able to compare how all the patients did in the various arms, and then make a determination. The ideal result would be for people to show improvement either in the low or high dose Ifenprodil (or both) compared to the non-treatment arm.”

In addition to the overall study, Algernon decided to take 75 patients and look at their data on day 15 of the study. That interim data will be released in the third week of December.

“We’re hopeful that if we have positive, trending data, that we can expand our research,” Moreau says.

Clinical trials down under

That’s what attracted Algernon, and they recently received approximately $600,000 in a refundable tax credit. Algernon’s unique business model of drug repurposing includes conducting as much clinical research as possible in Australia in order to take advantage of the Australian Government’s refundable tax credit.

As Moreau mentions, “This refund, while expected, is an important part of our capital efficient R&D plan to drive value for our shareholders by keeping our research costs to an absolute minimum as we conduct early clinical investigations into the efficacy of our re-purposed compound targets.”

NEWS RELEASE: We are pleased to announce that we have received approximately $600,000 CAD in the form of a refundable tax credit from our Ifenprodil IPF & chronic cough Phase 2 clinical research work in Australia.

Developing a new drug from scratch catered towards fighting off COVID-19 could take years.

Re-purposed compounds have a much lower risk of failing in human trials as a result of safety issues and can therefore go through the approval pipeline quicker. For instance, a drug repurposing strategy can save up to eight years of pre-clinical research and millions in R&D costs.

Since Algernon’s value proposition is centered around repurposing previously approved compounds, this makes the company an intriguing investment opportunity.

In the last year, Algernon took Ifenprodil and presented its scientific argument based on their animal data for IPF and cough, as well as the independent research for Ifenprodil and H5N1, and received Health Canada and U.S. FDA approval, and started a multinational COVID -19 study.

“The fact that we were able to advance our Ifenprodil COVID-19 clinical program so quickly, for all the right reasons, makes it one of our greatest accomplishments to date,” Moreau notes.

And there will be more newsflow coming in the next few weeks as the company reviews its interim trial results and moves forward with its goal to provide safe, already approved drugs for new disease applications.

The company’s long-term strategy doesn’t stop at Ifenprodil. The company wants to have several repurposed drugs in its pipeline.

“We like to have a few different drugs in development at all times, so that we increase our chances of commercial success,” Moreau explains.

The company currently has three other drugs in its pipeline for non-alcoholic steatohepatitis (liver inflammation), chronic kidney disease and inflammatory bowel disease.

“During that critical path, we might end up licensing or partnering the drugs out to big pharma, or we may end up bringing the drugs to the market ourselves.”

Many of the larger firms become risk averse and slow moving because of their size. Algernon, on the contrary, being, “lean and mean,” can advance things quickly, especially when backed up by science and data.

Specifically, referring to its Multinational Phase 2b/3 Human Study of Ifenprodil, Moreau notes,

“When you have the data, it’s an important moment, it’s a moment of inflection, it’s a milestone moment. And it’s not something that you can shy away from, it’s time to put the cards on the table and you have to face it.”

“We’ve tried to be efficient, we’ve tried to be effective, get information to investors and hopefully, we find that the drug is effective. Because we want to start to see if we can get that drug into physicians’ hands so that they can start to use it. That’s the goal here.”

Learn more about Algernon Pharmaceuticals by visiting their website here.

Make sure to follow Algernon Pharmaceuticals on social media:

The company advises that it is not making any express or implied claims that Ifenprodil has the ability to eliminate, cure or contain COVID-19 (or the SARS-2 Coronavirus) at this time.