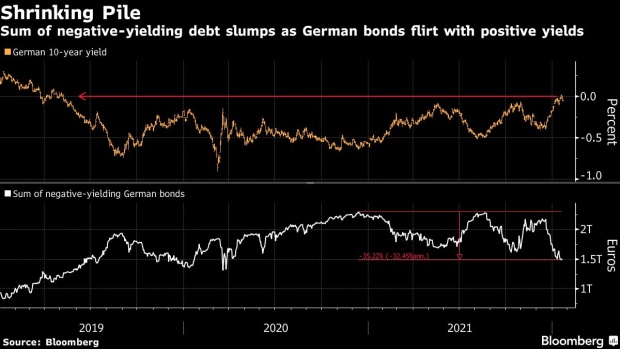 (Bloomberg) -- On a recent visit to the United Arab Emirates, European Commission Director-General Gert Jan Koopman said he “had a pretty difficult time explaining” to investors why they should be purchasing assets in Europe that yield less than zero. Soon, he might not need to.

The amount of debt in the euro-area with a negative yield has dropped by more than a third from a peak in 2020. In a sign of the broader repricing that’s afoot, the yield on German bunds, the region’s paragon of safety, briefly rose above zero for the first time in three years this week.

It comes as traders brace for the gradual end to Europe’s era of ultra-loose ultra-lose monetary policy -- super-charged to help the economy weather the pandemic. If sustained, the march higher in yields would be a sea change for asset managers, who for years has been forced to venture into riskier assets to lock in returns.

“The higher the yield, the better,” said Mark Healy, a portfolio manager at AXA Investment Managers. “I never liked buying something with a negative yield.” He expects yields to rise further during the course of 2022, giving investors an opportunity to put money to work in Europe again.

Money market are now wagering the ECB will raise its deposit rate for the first time in 11 years in October, and bring it to zero by the end of next year, from minus 0.5% currently. That’s among the most bearish positioning since 2015.

Officials are also expected to start winding down their asset purchases after March, removing a key element of support from the market. Their bond-buying program has been integral in pinning down borrowing costs. Despite the latest pullback, there’s still around 1.5 trillion euros ($1.7 trillion) of negative-yielding bonds in the region.

“To have bund yields where they are just seems like the wrong level,” said Craig Inches, head of rates and cash at Royal London Asset Management. He sees yield on 10-year German bonds reaching 0.5% by the end of the year, a level last seen in 2018.

“As some of the stimulus from ECB buying recedes, people will be forced to look at the valuation metric and say -- why am I holding this? It just doesn’t make any sense,” he said.

The skepticism fits with the broader global backdrop, where a surge in inflation is forcing some of the world’s biggest central banks to reconsider their accommodative stances. From Treasuries to Australian bonds, rates markets have taken a battering as traders adjust their expectations.

But a move into positive territory would also come with benefits. According to Antoine Bouvet, a rates strategist at ING, certain investors including central banks can only buy positive-yielding assets.  “Negative rates is not something they would want to incur even if diversification argues in favor of buying EUR,” he said.

Rising yields might help lure foreign investment, the European Commission’s Koopman said at a webinar on Thursday organized by the Official Monetary and Financial Institutions Forum, a think tank for economic policy.

The trouble is that with investors waiting in the wings, any increase in yields could prove fleeting. Toronto-Dominion Bank is already recommending clients buy German bunds, saying the move is now overdone.

“Positioning has turned short too quickly and could reverse as we see strong seasonal month-end buying,” Pooja Kumra, a senior European rates strategist at the bank, wrote in a note to clients on Wednesday, targeting a move back to minus 0.15%.

Other bond bulls are also holding firm, saying the market has gotten ahead of itself when it comes to pricing in rate increases.

“What is priced in is unrealistically hawkish for the ECB,” said Chris Attfield, a fixed-income strategist at HSBC Holdings Plc, who expects the German 10-year yield to end the year at minus 0.5%, while brushing off the latest selloff as volatility that is typical in the beginning of the year.

For Jefferies International strategist Mohit Kumar, structural factors such as demographics and technology will “suppress inflation over the medium term.” He doesn’t expect the ECB to raise rates through 2023.

Still, a repricing looks inevitable for some. Consumer prices in the region rose more than expected to a record high of 5% in December. And ECB officials including Francois Villeroy have warned the market that earlier rate hikes might be needed if inflation proves to be persistent.