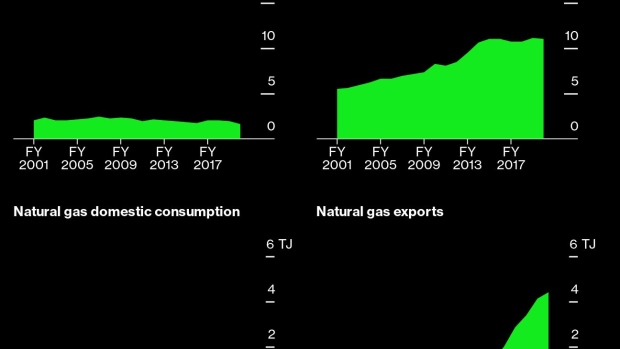 Transmission towers in Sydney, Australia, on Monday, June 20, 2022. Australia’s electricity system manager is so stretched by a squeeze on the nation’s energy supply that it’s being forced to delay connecting some new projects to the grid. , Bloomberg

Facing the prospect of insufficient supply to meet demand, the national operator AEMO suspended the country’s spot power market. Volts kept flowing to customers and lights stayed on, but the market itself was broken. Bloomberg Opinion’s David Fickling described the event as “an extraordinary failure.”

I think of Australia like I think of California, as a postcard from the future that illustrates what deeply decarbonizing energy systems might look like in practice. The nation is making progress on deploying renewable power while remaining decidedly linked to global energy markets — despite not being physically connected to them (at least not yet). Australia is a major fossil-fuel exporter. Its domestic consumption of coal and gas has grown only 8% in two decades, while exports of coal have more than doubled and exports of gas have increased more than 10-fold.

That macro background to the market suspension is important, but so are the micro details. First, Australia’s capacity for coal-fired power generation is at the lowest level it has been in over a decade, due to scheduled maintenance at plants, shortages of coal and other issues. Its fleet of coal plants is aging, and as they age they become both less reliable and more expensive to maintain. Second, the demand for gas is very strong right now, both globally and in Australia.

As gas demand outstripped supply, the price of the fuel naturally shot up, leading AEMO to cap it to protect consumers. But then, with power prices spiking, the operator instituted a second cap, on the wholesale price of power. The states of Queensland, New South Wales, Victoria and South Australia had previously allowed spot power prices to exceed A$15,000 per megawatt-hour. In order to further protect consumers, AEMO lowered it dramatically to only A$300 per megawatt-hour.

At that price, many generators would lose money on every megawatt-hour sold. So they didn’t operate, with the result being a big reduction in the amount of generation capacity online. Then trading was suspended and the NEM became a market without a market.

I asked BloombergNEF’s team in Sydney about how Australia’s energy market, and global markets in general, should plan for a more volatile future.

Will Edmonds, who examines the consumer-facing side of the market, stresses that Australia’s transition away from coal-fired power matters not just Down Under and not just in 2022. It matters everywhere, for the next several decades. Power plants age in only one direction. At the same time, governments should (or really, must) plan for more abnormal weather and higher demand, as well as more unscheduled maintenance of generation equipment and more renewable generation.

Leonard Quong, who runs Australia analysis for BNEF, says that market operators must plan for variable capacity, not just variable generation. That is, they must ensure not just that capacity is available but that it can actually be used. The problem earlier this month was not that the country’s National Electricity Market did not have enough generation available to meet demand. Rather, the NEM was not offering the incentives companies needed to generate power. In this sense, Australia is a front-runner, Quong says, with an “old, decrepit baseload-power-generation fleet,” but many markets will find themselves in the same spot eventually.

They’ll need to do more than schedule maintenance, in this future. They’ll need to orchestrate it. However, as Quong points out, no market has mechanisms for both incentivizing generators to plan their maintenance away from peak demand (and also pay for it) and for eventually retiring and eliminating coal- and gas-fired power.

Ali Asghar, who focuses on Australia’s energy export markets, expects two possible outcomes. The first is energy protectionism, which we are already witnessing. Large energy producers like Australia are threatening to limit coal and gas exports in an effort to serve domestic demand and keep a lid on domestic prices; the US has considered doing this for oil and Indonesia has already restricted exports of coal this year.

Another possibility is less dour. Asghar says that large strategic reserves of fuels, centrally coordinated, should become national priorities. The US and Europe already have significant strategic reserves, but many countries (including Australia) operate on much thinner storage margins or none at all. When energy producers start limiting the supply of fuel, importing countries should think about building large reserves as a way to make the entire energy system more resilient to climate and geopolitical events.

Deep decarbonization, even in the most hopeful scenarios, will take decades. It will also be volatile, which is easy enough for energy modelers to say but rather less easy for grids to plan for, and markets and people to react to. Hopefully Australia’s dislocating market failures lead to better planning, both there and elsewhere.