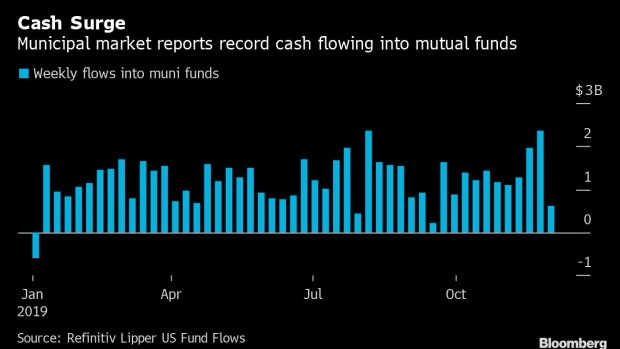 (Bloomberg) -- Here’s one reason why BlackRock Inc., the world’s largest money manager, doesn’t expect a pullback from the municipal-bond market next year: Google searches for the securities jumped in April, when many Americans first felt the impact of President Donald Trump’s tax-cut law.

The $10,000 cap on state and local tax deductions it ushered in helped set off a record-setting municipal-bond buying spree by those hunting for ways to drive down what they owe. And that interest is unlikely to subside anytime soon, Peter Hayes, head of such investments for BlackRock, said on Tuesday.

“We think that this demand continues at least into the first half of 2020 at its current pace,” Hayes said at a media event hosted by the company.

The influx of cash into municipal-bond mutual funds every week since early January and the Federal Reserve’s interest-rate cuts helped drive the securities to a 7.3% return this year, the biggest annual gain since 2014, according to Bloomberg Barclays indexes. While analysts don’t expect such outsize increases next year, in part because prices have less room to appreciate, they’re still expecting the market to post positive returns.

Related Story: ‘Best Days Are Behind Us’: Outlook Dims for Muni Bonds in 2020

Hayes, who didn’t offer a forecast for the market’s gains in 2020, said there’s no signs of any of the major factors that could cause demand to dissipate. One, a sharp move higher in interest rates of more than a quarter percentage point, isn’t expected, he said.

“You’d have to see a significant move -- which, again, we’re not expecting,” Hayes said.

Nor is BlackRock expecting any concerns about defaults or eroding credit ratings to scare investors away, as happened after the recession stoked off-base predictions in 2010 that more governments would renege on their debts.

Right now, states and cities are generally enjoying the financial gains reaped from the record-long economic expansion of the past decade. More state and local governments were upgraded in the third quarter than were downgraded, marking the ninth consecutive quarter of such a trend, according to Moody’s Investors Service.

The main unknown is the 2020 presidential election, but Hayes said it’s too soon to tell what the impact of that could have on taxes and it would take “well into 2021” for any changes to be enacted. Some investors and analysts have surmised that the race could even bolster the appeal of municipal bonds if investors are forecasting higher taxes under a Democratic president.

“We’ll have to see what the election brings,” he said.

To contact the editors responsible for this story: Elizabeth Campbell at ecampbell14@bloomberg.net, William Selway