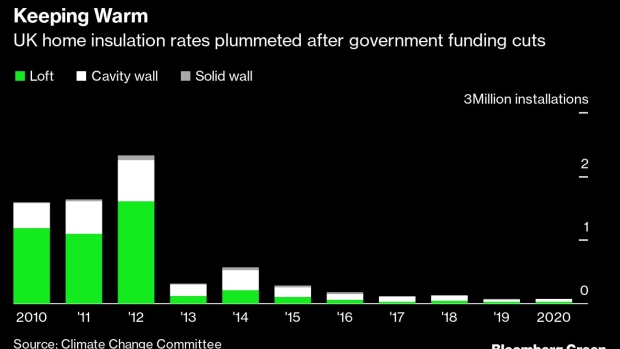 (Bloomberg) -- As he opened the COP26 climate talks in November, Boris Johnson warned “it’s one minute to midnight” in the race to slash planet-heating carbon emissions. His government has since announced £37 billion of funding focused squarely on subsidizing the consumption of energy -- much of it fossil fuels.

The prime minister didn’t come to this point by choice. He’s reacting to a cost-of-living crisis that has impoverished millions of Britons. But his government has been forced to address this problem with tools that are both costly and climate-busting in large part because of past policy failings.

Over the last decade, a raft of energy-efficiency measures such as home insulation have been botched or abandoned under successive Conservative prime ministers. The expansion of onshore wind power has also slowed markedly due to their restrictive policies. British consumers’ annual energy bills would be £2.5 billion ($3.2 billion) lower today if those things hadn’t happened, according to an analysis by Carbon Brief.

The support for households announced this week was “absolutely necessary and the right thing to do” said Luke Murphy, associate director for energy and climate at the Institute for Public Policy Research, a progressive think tank. “But it should have been accompanied by investment in home insulation and an expansion of onshore wind to lower bills, increase energy security and tackle climate change.”

Failure on these policies has left Johnson’s government “lurching from crisis to crisis, coming back with ever greater short-term fixes,” Murphy said.

When COP26 concluded Alok Sharma, the conference president and UK cabinet minister, told the nearly 200 national delegations departing Glasgow that he would be pressuring them to stick to their climate promises. Six months later, it’s the hosts themselves rowing back on commitments signed at the United Nations summit.

This week brought the clearest example of that. Chancellor of the Exchequer Rishi Sunak announced £5 billion of funding to help consumers cover soaring energy bills, paid for with a windfall tax on oil and gas producers. In an attempt to not deter investment, he said companies will be able to avoid some of this levy by making fresh investments in oil and gas extraction -- breaking a COP26 pledge not to subsidize fossil-fuel production.

On Friday, Johnson was promoting the revitalization of North Sea oil and gas, urging companies to boost their investments.

“I don’t think we can turn our backs entirely on hydrocarbons,” he said in an interview with Bloomberg TV. “You’ve got to deal with supply-side issues” and keep the North Sea going, he said.

The windfall tax follows a series of other policy decisions that contradict Britain’s promise to achieve net-zero carbon emissions by 2050. They include taking 5 pence off the price of a liter of petrol to help drivers, and potentially reopening the door to fracking for natural gas. Despite its desperation for new energy supplies, the government hasn’t lifted restrictions on new onshore wind farms, which are the cheapest form of new energy.

Altogether, the Treasury has pledged to spend about £37 billion to help British people pay their energy bills.

“I’m not sure that was what was envisaged in the Glasgow climate pact,” Chris Stark, chief executive of the UK government’s independent watchdog, the Climate Change Committee, wrote on Twitter immediately following Sunak’s tax announcement.

There were no notable new policies to help people reduce their energy consumption, which in the long term will be key to protecting them from price shocks. Insulation rates remain well below the peak rates of delivery achieved before 2012, when key policies were scrapped, the Climate Change Committee said.

The UK government has repeatedly failed to come up with a successful home-insulation program. In 2013, then Prime Minister David Cameron reduced spending on energy efficiency after reportedly demanding departments “cut the green crap”.

It is possible for governments to create a support package that both helps people now and in the longer term, said IPPR’s Murphy. For example, Ireland is offering homeowners a 50% discount on deep retrofits to improve their efficiency.  Germany and New Zealand have been giving commuters cheap public transport fares, while some US cities have made it free.

“Ultimately, the only way we have a long-term route out of this challenge is by reducing demand for energy and fossil fuels,” said Tim Lord, a former U.K. government energy official who is now head of climate change at the Phoenix Group Holdings Plc, which provides pension and insurance services.