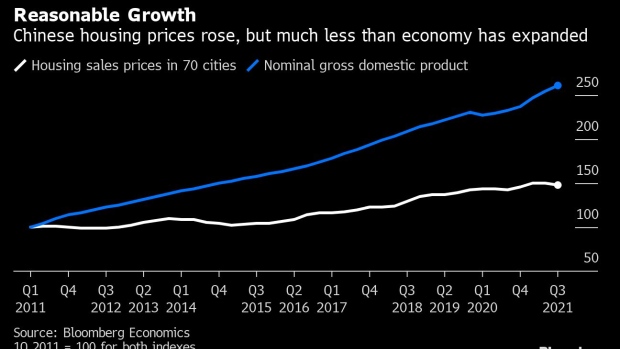 (Bloomberg) -- As China struggles with its most severe real-estate slowdown in years, some have been asking whether the end of Japan’s real-estate bubble in the early 1990s offers a guide. But such comparisons are less helpful than they might appear, according to new research from Bloomberg Economics.

Japanese real-estate price growth in the 1980s was far in excess of the growth in gross domestic product, while in China the opposite has been true over the past 10 years, according to Yuki Masujima of Bloomberg Economics. Japan’s real-estate prices relative to gross domestic product more than doubled from 1980 to 1990 when prices peaked, while in China that ratio has dropped about 40% over the last decade as gains in property prices lagged the economy’s rapid expansion.

That suggests that rising demand for real estate in China has been supported by increased productivity in other areas of the economy. However, Chinese economic growth is slowing and looks set to continue to decelerate over the next decade, making it important to keep property prices in check to avoid a rise in the price to GDP ratio, Masujima adds.

Another difference is that when its real-estate bubble burst, Japan was at the end of its period of catch-up growth, with per capita incomes comparable to the U.S. In China, GDP per capita is less than a fifth of the U.S level, which suggests more room for household income growth to support housing demand.

“So long as Chinese economic growth and household income levels continue to improve, demand for better and bigger housing will be insatiable,” Yan Wang, chief China strategist at Alpine Macro said in a recent note.

Another source of real estate demand in China is the ongoing process of urbanization. China’s urbanization rate of 64% last year is lower than Japan’s 1990 rate of 77%, as reported by the World Bank.