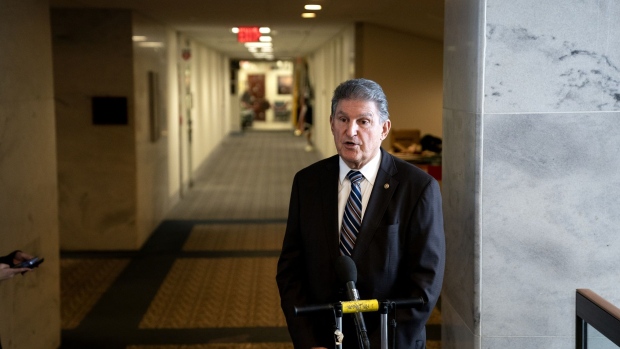 Senator Joe Manchin, a Democrat from West Virginia, speaks to members of the media outside his office at the Hart Senate Office building in Washington, D.C., U.S., on Tuesday, Jan. 4, 2022. Senate Democrats began their new year seeking a path forward on the White House's stalled domestic economic agenda, hoping to pass a slimmed-down version before midterm election campaigns begin. , Bloomberg

(Bloomberg) -- President Biden’s ambitions to pass a signature climate and social infrastructure package sustained a major setback last month when Senator Joe Manchin from West Virginia — long seen as the swing vote for the bill — said he was pulling his support.

Lots of Democrats, predictably, were outraged, but there were also some unexpected protestors, including the United Mine Workers of America, which counts 8,000 coal miners among its 90,000 members.

Build Back Better would have sent billions toward upgrading the electric grid, investing in next generation energy storage, and tax incentives to grow renewables – all acts that would have sped the transition from coal.

Yet the day after Manchin, a Democrat, announced his opposition, the union issued a statement asking him to reconsider his vote. This week, the White House said it was looking to “reset” talks on the bill by trimming social policies such as paid family leave and the child tax credit and focusing on the climate and infrastructure provisions — an approach Manchin says he supports.Bloomberg Green spoke to Phil Smith, UMWA’s director of communications and governmental affairs to discuss why the union has pressed the senator on BBB and whether the bill has a real chance of return. The interview has been condensed and edited.A lot of unions supported Joe Biden in the presidential race, were you among them?We’ve made no endorsement in any of the last three presidential campaigns.Build Back Better has had numerous incarnations. Have you supported all of them, including the one that had the Clean Power Plan, which would have penalized utilities that used coal, or just the most recent version?

We support some things in all the Build Back Better bills – but not all of them.

Three provisions have our support: Extending of the Black Lung Disability Trust Excise Tax at its levels that existed last year; providing a pathway for manufacturers to come into the coal fields and create good new jobs; and the provisions that allow workers to organize a union without fear of retaliation from an employer.

It's important to understand that there have already been 45,000 coal miners who have lost their jobs in the last 10 years. So we're not just talking about what may happen in the future, we're talking about what's already happened. When the Biden administration told us they wanted to  create good union jobs, we listened and agreed this was one of the best ways forward to do that.

(NOTE: An excise tax on coal producers is the chief source of revenue for the Black Lung Program and Black Lung Disability Trust Fund, which pays benefits to miners disabled by black lung disease.)Well, had BBB passed it would have done that but also created a huge surge in renewable energy that would have further sped the end of coal, no?We have also always said that we believe the only future for coal is the development and application of technology like carbon capture and storage, which quite frankly, was what a good chunk of the infrastructure bill was all about. There is language in there that's going to build out CCS infrastructure, and pipelines and injection wells and things like that. So for the first time, Congress actually took a step forward, to do something to actually preserve the coal industry.Given that there is so much in this bill for coal, do you think there is a way to turn Manchin around and will you be pressing him?

My personal opinion is that BBB is just not happening in its current form. What that means is we've got to figure out other pathways to try and achieve some of these goals. We're putting our thinking caps on right now.Joe has said we could find a way forward on the energy piece of the bill — from his perspective that’s fairly easy. But there are a lot of other things keeping him from being supportive with that legislation as it is now, and those are things that we're not really going to be pushing him on.

I've known Joe for 20 years and the more pressure you put on him, the farther he digs in his heels.