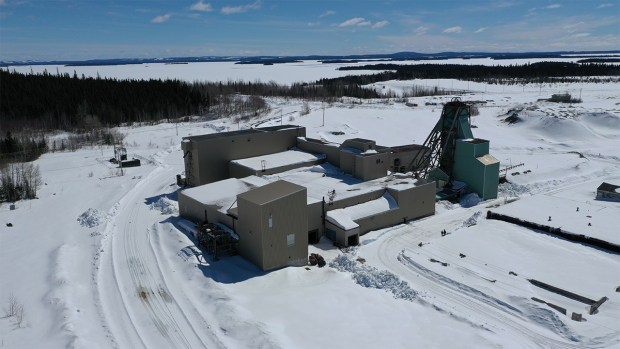 Copper Rand mill and headframe , Image Courtesy of the Market One Media

In the first quarter of 2021, all these things happened: Swedish automaker Volvo announced it would sell only electric vehicles by 2030, the amount of electricity supplied by renewable sources in the U.S. surpassed that created with coal for the first time and U.S. President Joe Biden introduced a massive infrastructure plan including a proposal to spend hundreds of billions of dollars on renewable energy and electric vehicles (EVs).

All of this news is great for the owner of a quartet of old mines in Quebec.

Formed in 2017 and headed by President and CEO, Ernest Mast, Doré Copper Mining (TSXV: DCMC | OTCQB: DRCMF | FRA: DCM) is poised to capitalize on both the buoyant market price and surging demand for copper, which is used extensively in renewable power and EVs.

The company owns a mill and four key high-grade copper and gold projects (three of which are past producing mines) in and near the prolific Chibougamau mining camp, about 700 km north of Montreal: Corner Bay, Joe Mann, Cedar Bay and Copper Rand.

These brownfield assets — dormant mines or mills that may be reopened or restarted — are the key for Doré, who aims to employ a hub-and-spoke model of operation, where the mines feed a centrally located mill less than 60 km away, to produce copper and gold ore that can then be sent to smelters.

Here is a brief summary for each of the four high-grade assets:

- Past production of 1.17 M oz at 8.26 g/t Au (largest producing gold mine in Chibougamau district)

- The first drilling program by Dore Copper was successful in demonstrating the high-grade downdip extension of the West Zone, the continuity of the Main Zone and the high-grade potential of the Far West Zone

“For many investors, brownfields are preferable to a greenfield because there’s a lot less capital to be spent,” says Toronto-based Mast, who has spent 30 years working in mining in Canada and internationally.

He adds, “And because mining is already being done in the area, there’s a lot less risk of having a geotechnical or other type of surprise, because essentially you know what’s there.”

But Doré isn’t solely relying on previous mine owners’ experience. Its preliminary economic assessment is fully funded and will be completed by the end of 2021, as will additional drilling and testing with a goal to expand some mines.

This will be followed by a “bankable study” which will be completed in about a year and give the company a firm cost estimate to restart the mines and mill. After that, it will take just six to 12 months to begin operations.

“We should be in a good position to acquire financing as we’re anticipating the study results to be favourable and there is a lot of appetite in our space for investing in high-quality projects,” Mast notes.

“It’s quality that makes these things work. And with these copper and gold prices, that’s very high-quality rock.”

“There’s really not a lot of new copper projects coming online in the next five years. There’s just a handful of potential projects in North America. So being one of them and having the advantages we have would make us quite interesting for many investors,” adds Mast.

Other advantages for Doré include strong relationships with the Quebec provincial government, which has a long history of supporting mining enterprises, and the Oujé-Bougoumou Cree Nation, which is located near Chibougamau and partners with a number of companies.

In and around Chibougamau, an area that has been mined since the 1950s and where there are known high-quality deposits of copper and gold, there is an established workforce. In fact, Doré has already been approached by experienced mining and milling professionals inquiring about work. The operation, when open, will employ 200 to 300 people.

“Having the infrastructure in place is a great competitive advantage,” adds Mast.

Doré’s key advantage, however, is the quality of the copper it will likely produce.

High-quality copper is the key

David Davidson is a senior analyst, at Paradigm Capital, an independent investment dealer. He also has an extensive background working as a geologist and mining engineer.

“The Chibougamau area is well known for its favourable geology and good quality copper and gold,” he explains. “Whether a mine’s copper is considered high-quality is determined by the percentage of the metal found in a tonne of mined material.”

Our CEO, Ernest Mast, sat down this morning with Soar Financial Partners - Rohstoffaktien, News & mehr in a live...

He adds, “For an underground mine such as Doré’s Corner Bay, 2 per cent copper grade would be considered unusual and 3 per cent quite spectacular.”

“It’s quality that makes these things work,” says Davidson. “And with these copper and gold prices, that’s very high-quality rock.”

Copper demand is on the rise

Davidson only sees demand for copper rising. With the world slowly moving out of the COVID-19 pandemic and trillions of dollars going into economic stimulus, massive sums of money are being invested in renewable power sources and EVs.

“Copper is one of the main parts of the infrastructure there. Certainly, in wind turbines, solar, EV charging stations, it’s all copper,” Davidson says. “If, by 2030, we get anywhere near the projections of electric vehicles and renewable power, we’ll probably come close to adding 50 per cent to the current demand for copper.”

Mast is similarly optimistic about the prospects for Doré, the market for copper and the potential benefits to its investors. He notes that rather than building huge electricity-generating stations, many nations are working on a smaller scale with local power projects involving solar and wind energy — and all require copper.

Watch the company’s Industry Insight to learn more about the supply and demand side of copper.

To learn more about Doré Copper, visit their website here.