If, one month from today, Energy East officially dies, don’t blame the nearly $16-billion pipeline proposal’s death on the National Energy Board.

Late Thursday, Calgary-based TransCanada asked the NEB to stop reviewing its Energy East proposal for 30 days in order for the company to “conduct a careful review of recent changes” to the pipeline review process announced in August. In addition to other new factors it would consider, the NEB said it would now take greenhouse gas emissions into account when it determines whether Energy East would be a net benefit to Canada.

On Friday, the NEB granted TransCanada’s request, agreeing to suspend its review of the Energy East and Eastern Mainline projects for 30 days.

In its release, TransCanada framed the recent NEB changes as the straw that could break the proverbial camel’s back.

“Should TransCanada decide not to proceed with [Energy East] after a thorough review of the NEB’s amendments… the carrying value of its investments… would be negatively impacted,” the company said.

The project has been facing increasing challenges since it was first proposed in 2013. TransCanada was forced to alter the 4,600-kilometre route in 2015 following an outcry over the original plan calling for an export terminal in Quebec close to a breeding ground for Beluga Whales.

Last year, the NEB was forced to restart its review of the project after alleged conflicts of interest forced two review panel members to resign. 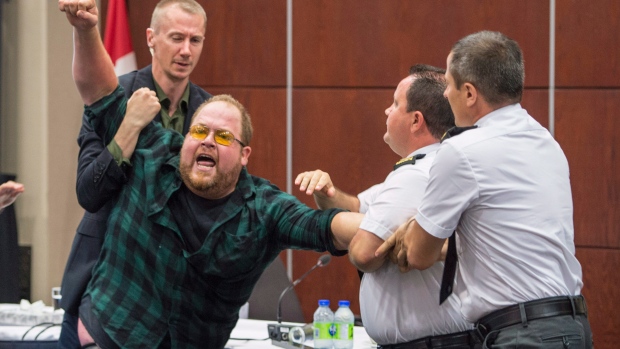 Add to that the myriad of protests carried out and planned all along the project’s route and the ardent opposition from much of Quebec. And surpassing all of those issues is the matter of basic economics: the revival of TransCanada’s other major oil sands export proposal – Keystone XL – earlier this year has called the financial incentives for the company and the broader industry’s need for Energy East into question.

“At best, we would expect TransCanada to build Keystone XL or Energy East,” Wood Mackenzie analyst Afolabi Ogunnaike wrote in a research note published in January, “but not both.”

Simply put: the camel’s back was likely to break on Energy East even without the increased regulatory burden. The only big change to that reality coming as a result of the recent NEB moves, argues Dan Tsubouchi, is how quickly the proposal could be killed.

“Would TransCanada cancel Energy East if they got all the Keystone XL approvals? Probably not right now,” the chief market strategist for Calgary-based Stream Asset Financial told BNN via email.

“They would likely look at the cost-benefit and keep the process alive as it would be another 18 months to two years ... given the problems of social unrest in the United States, they would have waited until they felt more confident that [Keystone XL] construction would get done.”

“But, yes, once the certainty of Keystone XL became clear, then I think there would be no need [for Energy East] unless crude oil prices become much stronger for longer,” Tsubouchi said.

Recent U.S. history explains why, despite strong support from the current U.S. president compared to the skepticism of his predecessor, Keystone XL is still far from a done deal amid uncertainty about shipper support and continued opposition to the project in Nebraska.

Similarly for Trans Mountain, the project championed by Texas-based Kinder Morgan to deliver more Alberta crude to the west coast that is currently on the verge of starting construction, ardent local opposition and multiple court challenges (including from the new government of British Columbia) could prevent Kinder Morgan from ever completing its plan to triple capacity on its half-century-old line.

Oil sands producers have struggled for years to obtain direct tidewater access, which would allow them to sell diluted bitumen to global markets as opposed to being largely beholden to the United States Midwestern refining complex. If Energy East, Keystone XL and Trans Mountain all end up getting axed, that would be the worst-case scenario for the sector as it would deny them a more diverse customer base and the higher prices that would result.

The situation would be made worse over time as the latest NEB forecast calls for oil sands production to grow by roughly one million additional barrels per day between now and 2020 before hitting an indefinite plateau. Yet even if the worst comes to pass, Tsubouchi argues the extra oil will find a less controversial outlet.

Enbridge, TransCanada’s chief rival and operator of Canada’s largest network of oil export pipelines, is quietly increasing capacity of its pipeline system by more than 500,000 barrels per day.

“These expansion plans are lower profile likely because it isn’t one new pipeline; rather, it is modifications and expansions of existing pipe in the ground,” Tsubouchi said. “Having pipe in the ground doesn’t exempt Enbridge from getting social licenses for their projects, but it has to be a major competitive advantage versus getting social license for a new pipeline.”

The politics at play over Energy East are as unavoidable as they are intense. Many fingers are likely to be pointed at the NEB for potentially putting the kybosh on a project often described by supporters as the 21st century version of building a national railway in terms of its ability to unite the country around a singular goal.

Yet no matter how fervently the premier of New Brunswick vows to do “everything we can” to preserve Energy East, or the premier of Saskatchewan paints Energy East opposition as a threat to national unity, they cannot change the reality of Keystone XL offering a path of far less resistance to the company behind both projects. Nor can they change the reality of lower-for-longer crude oil prices making multiple new export pipelines unnecessary.

They cannot change that reality and neither can the NEB.