Why FireFox Gold is ripe for gold discovery in Finland - BNN Bloomberg
{{ currentBoardShortName }}
Markets
As of: {{timeStamp.date}}
{{timeStamp.time}} 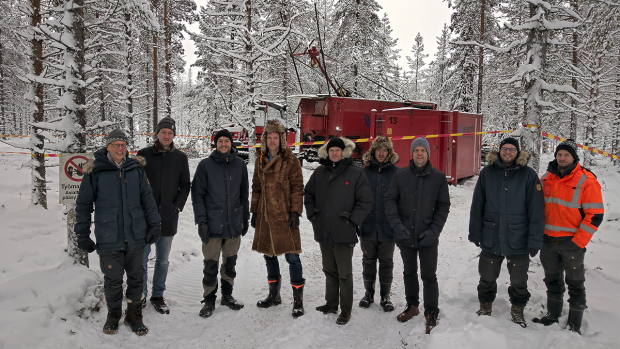 FireFox has assembled a skilled leadership and technical team to focus exclusively on making gold discoveries in Finland. , Image courtesy of Market One Media Group

Mention Lapland and most people conjure up an image of herds of reindeer galloping across a desolate, snow-covered landscape. But there's a different kind of stampede taking place in this remote region of Finland — a golden one.

That's because under the ice and glacial till covering this part of the Fennoscandian Shield lays the Central Lapland Greenstone Belt (CLGB). Roughly the same size as other, better-known gold regions such as the Abitibi Greenstone Belt, the CLGB is a tantalizing new frontier, largely unexplored and full of potential.

Little wonder there's growing interest in the CLGB by gold-focused major mining companies. Agnico Eagle's Kittilä operation, which just started producing in 2009, is now Europe’s largest gold mine. But the rest of the CLGB's ground is currently largely controlled by junior mining companies like Aurion Resources, which is actively exploring the belt's terrain, focusing on its Risti and Launi Projects.

"We have a conveyor belt of twelve projects. We should have several of the permits in place for those this year and we want to be continuously exploring."

Mining companies of all sizes are increasingly bullish on gold with Goldman Sachs predicting the precious metal to reach $2,300/oz this year, improving the long-term outlook for mining operations. That makes the undiscovered country of the CLGB all the more attractive, creating a new gold rush under the dancing Northern Lights straddling the Arctic Circle.

FireFox Gold in a dominant position in the exclusive CLGB club

One Canadian junior mining company that stands to benefit from the combination of great geology and an expected rise in the price of gold is Vancouver-headquartered FireFox Gold (TSXV: FFOX | FSE: A2PDU7).

The company recently acquired a large amount of new prospective ground putting it in a commanding position in the CLGB with 100 percent control over 800 km2 of terrain charged with significant discovery potential.

A new gold rush is underway in the Central Lapland Greenstone Belt. • New discoveries driving a race for exploration...

Unknowns are a cause for concern in many mining regions. But it was the belt's largely unexplored status and promising geology that led to FireFox's founding in 2017.

"It was all based on the premise that the CLGB was still underexplored even though it has all the earmarks you'd want to see for big gold deposits — about the same age as the Birimian Terrane in West Africa," says FireFox Chairman, Patrick Highsmith.

"Now we realize the belt is totally under the control of four juniors and two majors and that's a good place to be in, especially because the discoveries are still out there."

With so few companies controlling the majority of the prospective gold ground, others looking to join the exclusive CLGB club will have to acquire shares, make strategic investments or make deals to acquire the real estate already staked by the juniors on the ground.

The ground FireFox controls is starting to show the promise Highsmith and the rest of the company's team saw in it when they decided to launch their venture. The company is currently focused on three main projects: Jeesiö, Mustajärvi and Sarvi.

Early drilling results at the Mustajärvi and Jeesiö projects show high-grade narrow gold intervals and the presence of significant structures. Follow-up drilling in both areas is planned.

Sarvi has been the site of limited past exploration and the property will see a larger program in 2021 since permits are expected in early summer. Sarvi adjoins a major project held by Rupert Resources that has resulted in the region’s newest gold discovery.

"At Mustajärvi, we're getting teased with results that may indicate the cusp of a discovery, but it's early days and we need to do a lot more work," says Highsmith.

"We also have rock samples up to 10 g/t gold at surface in outcrops in the southern part of Jeesiö. So, there's gold all over the major faults passing through the property and we're out there studying the rocks through that glacial sediment to generate our next round of targets."

FireFox is also looking to learn more about the large chunk of new prospective ground it recently acquired. A busy summer field season will see extensive mapping and geophysical studies as well as drilling at multiple sites.

"We have a conveyor belt of twelve projects," says Carl Löfberg, President and CEO.

"We should have several of the permits in place for those this year and we want to be continuously exploring."

A key target of interest is the company's Kolho property, which is situated on a structural corridor similar to that of the Rupert Resources Ikkari discovery. Kolho covers almost 150 km2 and has seen only minor exploration to date. Depending on this season's results, the company's focus could shift to this promising property.

"If this summer's field season at Kolho lights up, we know we're in a great position and we have other promising properties as well," says Highsmith.

"Being nimble is top of the order and responding to new learnings is the key. We're continually churning through the data to see what it's telling us so we can respond."

With each new round of results, FireFox continues to broaden and refine its geological knowledge and apply it to its existing portfolio and new opportunities. Highsmith says it takes patience and a lot of drilling to see the whole picture at any one prospect.

"You have to persist and refine your model until you understand your target. There are people who ask, ‘when will you be ready to build a mine?', but that's not how we think. We are looking for multi-million-ounce gold deposits. Each time we go to Mustajärvi, we come back with narrow high-grade gold and that helps us build a more complete picture of the potential."

That comprehensive picture is being painted by FireFox’s team of experienced Finnish and European geologists who know the terrain they're working in intimately.

Dr. Sven Hönig, General Manager of Exploration, has over 12 years of diverse international mineral exploration experience, with a strong background in structural geology. Sven speaks four languages and has been active as a geologist across Europe and Asia on projects at stages from grass roots to advanced exploration.

"We have a strong team based in Finland. They live in Finland, so we didn't have to import our team from Canada or the U.S. They're prospecting in their own backyard and they know the system and the state of play," notes Highsmith.

Löfberg is also based in Finland and is a part of an upper-level management team with decades of international mining experience as well as a proven track record of success. An economist and precious metals investor, Löfberg has a master’s degree in Industrial Economics and broad experience in business consulting, project management, company start-ups and financing. He's also been Managing Director for private Finnish prospect generator Magnus Minerals since 2006.

Highsmith holds down operations on the other side of the Atlantic. He's a professional geologist and mining executive with experience on 300-plus projects around the world for companies like Newmont, BHP, Rio Tinto, Fortescue Metals Group, Lithium One and Pure Energy Minerals. He's worked in Finland since 2005 and is currently CEO of US gold explorer Timberline Resources Corp.

Analysts are watching the ground-game in the CLGB closely and tracking FireFox Gold especially closely. Eduardo Perez, Mining Research Analyst at M Partners in Toronto, is impressed with the company's dominant land position and its willingness to put in the work required to prove it's on the verge of a major new gold discovery.

"The realm of junior explorers is sometimes risky, but I think FireFox is a great company," says Perez.

"They have the predominant position in an underdeveloped belt and anybody that wants to work in the CLGB and find the next discovery there needs to go through them. Any of the majors that want to get involved in this greenstone belt are likely to look to partner with FireFox."

While Perez acknowledges the challenges of making a major discovery in the CLBG, the statistics show him there are likely more large-scale deposits like the one found by Rupert Resources waiting to be uncovered. FireFox is in an ideal position to make that discovery.

"FireFox Gold definitely has the right rocks in the right area. It's just a matter of time and effort before they make a discovery. It's going to take some time to fully understand the geology that will lead to that big discovery, but there's a lot of gold to be discovered in this area," says Perez.

With promising results for its three main projects, a highly skilled local team in the field and a management team with a proven track record, FireFox is well-positioned to take advantage of its strategic position as one of the few companies that control the prospective gold ground in the Central Lapland Greenstone Belt.

Now it may be surprising given the Fin's reputation as reserved, reticent people, but perhaps it's only fitting that the host country of all this golden potential, Finland, has been named the happiest place in the world for the fourth straight year by the United Nations World Happiness Report.

The report uses measures like social support, personal freedom and levels of corruption in making its judgement. For FireFox Gold, you can add to that the transparency and efficiency of Finland's mining regulatory system.

"Everything is transparent and as clear-cut as it can be and the most important thing is that you have no surprises," says Löfberg.

"After all, we're working in the world's happiest country."

That's enough to put a quiet smile on the face of any Fin or potential investor.

To learn more about FireFox Gold, visit their website here.