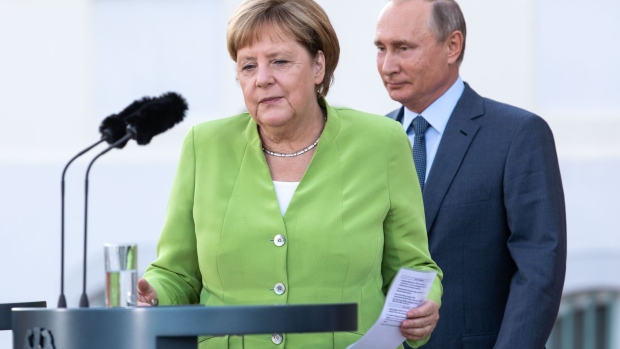 GRANSEE, GERMANY - AUGUST 18: German Chancellor Angela Merkel and Russian President Vladimir Putin arrive to deliver a joint press statement prior to their meeting at Schloss Meseberg palace, the German government retreat, at Meseberg on August 18, 2018 in Gransee, Germany. The two leaders are meeting to discuss a variety of issues, including the current international sanctions imposed on Russia, the situation in Syria as well as the situation in eastern Ukraine. (Photo by Omer Messinger/Getty Images) , Photographer: Omer Messinger/Getty Images Europe

(Bloomberg Opinion) -- Last March, after the attempt to poison the former Russian spy Sergei Skripal in Salisbury, U.K., it took the British government only a week to accuse Russia of being responsible; by the 10th day after the crime, it was already expelling Russian diplomats. Now, the same length of time after a very similar event in Berlin, the German government is reacting very differently.

The victim of the Aug. 23 attack, Zelimkhan Khangoshvili (or Changoschwili, as it’s spelled in German), was an ethnic Chechen from Georgia’s Pankisi Gorge region who had arrived in Germany via Ukraine in 2015. After several attempts on his life in the former Soviet Union, he was looking for a safer place to call home. He applied for asylum in Berlin, home to a large Chechen diaspora, and was going through an appeal process after being rejected.

Khangoshvili had been a field commander against the Russian army during the second Chechen war in the 2000s, and he’d attempted to assemble a force to fight the Russians again when they invaded Georgia in 2008. It’s unclear whether any formal criminal proceedings existed against him in Russia. At any rate, he wasn’t in Interpol’s Red Notice database as someone whom Russia actively sought.

The person held by German police on charges of killing him had arrived from Russia under pretty mysterious circumstances. According to information jointly obtained by the German weekly Der Spiegel, the Russian investigative site the Insider, and the U.K.-based investigative outfit Bellingcat, the man going by the name Vadim Sokolov received a Russian passport on July 19, applied for a French visa 10 days later, received it within a day and traveled to France on July 31. The passport reportedly isn’t registered in any Russian database, which, under normal circumstances, would have made it impossible for Sokolov to leave the country. It’s also unclear how he got the French visa so quickly, especially after providing a non-existent residence address in St. Petersburg.

In any case, after flying from Moscow to Paris, he traveled to Berlin. There, he allegedly rode up to Khangoshvili on an electric bicycle in a public park, shot him three times, twice in the head, then disposed of his Glock handgun, wig and bike in the Spree River. Two teenagers saw him at it and called the police, who detained him within minutes.

Russian President Vladimir Putin’s press secretary, Dmitry Peskov, has denied any connection between the Russian government and the Berlin murder. But the suspect’s passport shenanigans are reminiscent of those Bellingcat and the Insider found in the case of Skripal’s ham-handed poisoners, identified by the investigative outfits as military intelligence officers Anatoly Chepiga and Alexander Mishkin.

There is one detail that doesn’t feel quite right for a Russian intelligence operation: Sokolov has tattoos, which are taboo for intelligence officers in Russia. Still, Mark Galeotti, an expert on Russian security issues at the Royal United Services Institute in London, doesn’t think it would be impossible for a Russian spy service to use a freelancer on a job like the Khangoshvili hit. He noted on his blog that the FSB, Russia’s domestic intelligence, “has form hiring gangsters to kill Chechens.”

The Khangoshvili execution doesn’t come out of the blue. Russia has been suspected of ordering the killings of former Chechen fighters in Turkey, Austria, the United Arab Emirates and the U.K. Two Russian intelligence officers were convicted of killing a prominent Chechen in Qatar and later extradited to Moscow. Russia almost certainly has a covert program to eliminate the separatists Putin memorably promised in 1999 to “ice” under any circumstances, “even in the toilet if that’s where we catch them.” Though Khangoshvili was never a major warlord, he was influential in the strategic Pankisi area. And he’s said to have been close to Shamil Basaev, at one time Russia’s public enemy No. 1; this alone would likely put him on the list of the Kremlin’s most hated enemies. (Basaev died in a mysterious explosion in 2006.)

If Khangoshvili was killed because either the Kremlin or Chechnya’s current strongman, Ramzan Kadyrov, wanted him gone, his assassination is no less outrageous than the attempt on Skripal’s life. Though the method was less exotic than using a chemical weapon, a shooting in a public park is also a violent, dangerous action on a European country’s soil. Skripal is a U.K. citizen and Khangoshvili wasn’t a German one – but that’s a bureaucratic difference when it comes to murder.

Still, even though Germany knows at least as much and likely more about Khangoshvili’s murder today than the U.K. knew about the attempted poisoning of Skripal a week after that crime, the government is curiously silent about the incident. Why?

Possibly because Chancellor Angela Merkel doesn’t need a public spat with Russia right now, something former British Prime Minister Theresa May likely welcomed last spring. May was then in the midst of largely unsuccessful Brexit negotiations, and used the Skripal case to appeal to the U.K.’s alliances with European countries and the U.S., and to unite Britons around something, namely outrage about the insolent Russian action on their soil.

Merkel was quick to back May then, and she’s no Putinversteher (a pejorative meaning roughly “Putin Understander”). But, as a mediator in Ukrainian-Russian talks on eastern Ukraine, she’s helping arrange a summit on the issue that could bring the first signs of progress since 2015. In addition, Russia is about three-quarters done building the NordStream 2 natural gas pipeline to northern Germany, which her government is trying to protect from possible U.S. sanctions. A diplomatic flare-up with Russia would put her in a hard-to-defend position if Washington steps up pressure on the controversial project.

Germany has admitted thousands of Chechens opposed to Russian control of their homeland. But they can hardly hope to get much public support from the government over Khangoshvili’s murder. Anti-immigrant sentiment is still running high in Germany; if Merkel raised a stink about the killing, all she would get in response are questions about the wisdom of letting in this particular group of asylum seekers.

So, a standard police investigation is going on. A foreigner is accused of killing a foreigner. Things like that happen in Berlin from time to time.