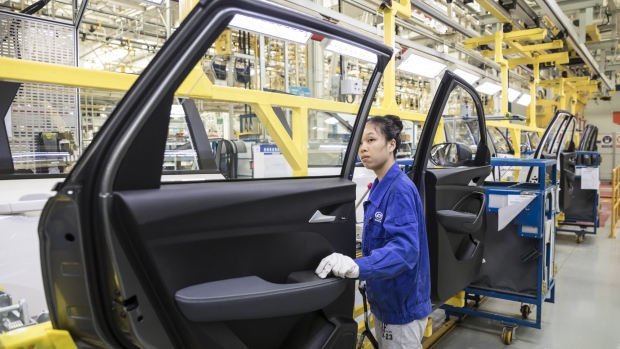 An employee inspects a door panel in the general assembly shop at the SAIC-GM-Wuling Automobile Co. Baojun Base plant, a joint venture between SAIC Motor Corp., General Motors Co. and Liuzhou Wuling Automobile Industry Co., in Liuzhou, Guangxi province, China, on Wednesday, May 23, 2018. GM and its partners sold 4 million vehicles in China in 2017, about 1 million more than the automaker sold in the U.S. , Bloomberg

(Bloomberg) -- General Motors Co.’s attempt to rejuvenate its business once again is made more difficult by a dramatic slowdown in the world’s largest vehicle market: China.

During previous shakeups, including its bankruptcy and recovery almost a decade ago, the U.S. carmaker could rely on steadily growing demand in China that helped it weather cooling sales at home. Not this time around: the auto industry’s sales in China have dropped for five months and are facing their first annual drop in at least two decades.

“GM is at a very difficult situation,” said Cui Dongshu, the secretary general of the China Passenger Car Association. “They have to shift more resources on new technology development to prevent what happened in 2008 from happening again. But it is more difficult as the sliding China market cannot offer them a cushion as it did a decade ago.”

The largest U.S. carmaker posted a 15 percent drop in deliveries in China for the three months ended Sept. 30, its first quarterly report since a trade dispute between the world’s two biggest economies began escalating in July. GM’s sales in China fell 2.5 percent in the first nine months of this year, performing worse than the overall passenger-car market. The company is mainly losing market share to Japanese automakers, especially in compact sedans and sport utility vehicles, said Yale Zhang, an analyst with Automotive Foresight Co. in Shanghai.

GM said Monday it will cut more than 14,000 jobs as part of a sweeping realignment to prepare for a future of electric and self-driving vehicles. The company plans to close five plants in North America. It also said two plants in other regions will face the ax, without identifying them. GM has four factories in China through its equally owned joint venture with SAIC Motor Corp. that builds Cadillac, Buick and Chevrolet vehicles. It has three plants in South Korea after closing one earlier this year, and also operates a factory in Thailand.

To contact Bloomberg News staff for this story: Yan Zhang in Beijing at yzhang1044@bloomberg.net

To contact the editors responsible for this story: Anand Krishnamoorthy at anandk@bloomberg.net, Ville Heiskanen