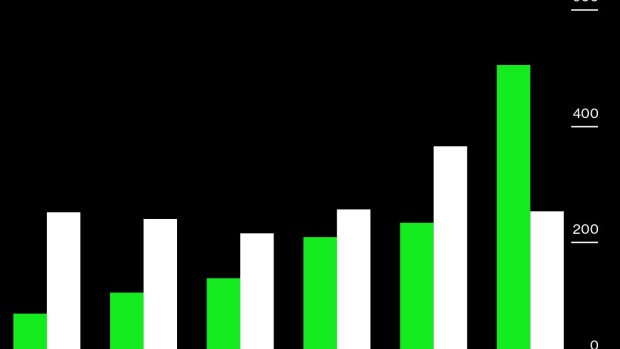 Contractors install SunRun Inc. solar panels on the roof of a new home at the Westline Homes Willowood Cottages community in Sacramento, California, U.S., on Wednesday, Aug. 15, 2018. California is the first state in the U.S. to require solar panels on almost all new homes as part of a mandate to take effect in 2020. , Bloomberg

Despite a drop in clean-energy stocks and intensifying concerns about widespread greenwashing, the market for investment products sold as being ESG-related had another record year by most yardsticks.

Issuance of sustainable loans and bonds, where proceeds are supposedly earmarked for environmental projects or to further a company’s social goals, exceeded $1.5 trillion, including about $505 billion of green bond sales; ESG-focused exchange-traded funds attracted almost $130 billion in 2021, up from $75 billion a year ago; and investment in early-stage climate tech companies approached $50 billion.

It also was a year of big fees for U.S. managers of sustainable funds, with revenue climbing to almost $1.8 billion from $1.1 billion in 2020, according to data compiled by researchers at Morningstar Inc.

But not everything went one way. The S&P Global Clean Energy Index, which includes companies like wind-energy giant Orsted AS, Spanish utility Iberdrola SA and Sunrun Inc., the largest U.S. residential-solar company, has declined 27% so far in 2021, after more than doubling in value last year.

The outlook for green stocks is challenging because of worries about rising interest rates tied to inflation, unpredictable U.S. politics and regulatory maneuvers like California’s decision to sharply lower subsidies and add new fees for home solar users, said Sophie Karp, an analyst at KeyBanc Capital Markets.“Despite long-term growth prospects, there is waning enthusiasm for the sector,” she said.

Adeline Diab, head of ESG research for EMEA and the Asia-Pacific region at Bloomberg Intelligence, agreed. On Dec. 21, she wrote: “Despite mounting catalysts with the U.S. infrastructure plan and EU taxonomy requirements, the clean-energy sector may remain exposed to uncertainty linked to government support such as stimulus delays or incentives-cuts announcements, the most recent being in California.”

Shares of renewable energy stocks hit another speed bump this week when U.S. Senator Joe Manchin, a conservative Democrat from coal state West Virginia, shocked his own party by announcing his opposition to President Joe Biden’s economic plan, which includes a landmark investment in the fight against global warming. Manchin, whose vote in an evenly-split Senate was needed in the face of universal Republican opposition to significant efforts to fight global warming, has undermined Biden’s bid to address the climate crisis.

Even with the stock market slide, this year was still the first since the Paris climate agreement in late 2015 that more money went into green bonds than debt issued by oil, gas and coal companies.

And next year is shaping up to be bigger. Analysts at Morgan Stanley estimate that green bond issuance will approach $1 trillion in 2022, led by sales from the European Union.

Bank of America Corp., the biggest corporate issuer of U.S. bonds sold as being tied to environmental, social and governance factors, also is predicting another big year for global sales of the debt.

“Will ESG primary issuance market double again in 2022? We’re not making that prediction,” said Karen Fang, the bank’s global head of sustainable finance, in an interview last week. “But we do think it will grow very, very strongly given the momentum behind the global net-zero transition and investor demand.”