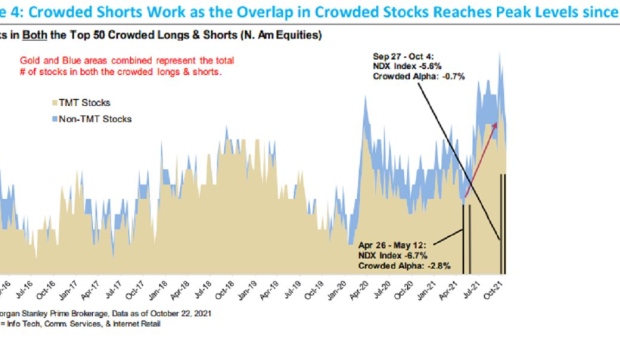 A monitor displaying a Bloomberg Television broadcast is seen through the window of the Nasdaq MarketSite in the Times Square neighborhood of New York, U.S., on Thursday, March 19, 2020. New York state GovernorAndrew Cuomoon Thursday ordered businesses to keep75% of their workforce home as the number of coronavirus cases rises rapidly. Photographer: Michael Nagle/Bloomberg , Photographer: Michael Nagle/Bloomberg

(Bloomberg) -- Hedge funds are betting against each other when it comes to internet and software stocks, with an unusually large number of companies targeted by both bulls and bears.

A dozen or so technology firms appeared on Morgan Stanley’s list of the 50 “crowded longs” at the end of last month. The same companies, whose names the bank didn’t disclose, also made the prime brokerage’s list of “crowded shorts.” That’s an extreme overlap not seen since 2010 and illustrates the growing divergence in opinions on where the market’s one-time darlings will go from here.

The split also speaks to the challenge of picking the right stocks at a time when the economic outlook remains murky and the Federal Reserve mulls rolling back its pandemic support. While tech innovations point to better growth prospects in the long run, stretched valuations put the industry in the crosshairs of a raging debate about inflation and interest rates.

“Either growth is scarce and I should own growth, which is the long side of the trade,” said Benjamin Dunn, president at Alpha Theory Advisors LLC. “Or growth is not so scarce, inflation is going higher, and the Fed is going to have to act more aggressively. Then I don’t want that exposure, and so I might want to be short.”

It’s possible that some money managers have sussed out the brewing trouble, while others are willing to look past one or two bad quarters, said Dunn.

Morgan Stanley noted that tech shares have seen the biggest increase in short sales among major industries this year -- accounting for about half of their clients’ total additions. Partly driving the bearish tilt was the managers’ failure to deliver on the long side.

The firm also said that the extreme overlap in the crowded longs and shorts is a sign of diversification that helped the hedge-fund industry fare better during the latest stock rout. The alpha, or above-market return, from the top-crowding stocks was a loss of less than 1% in the week through Oct. 4. That compares with a drop of almost 3% over a similar period of selloff in May.