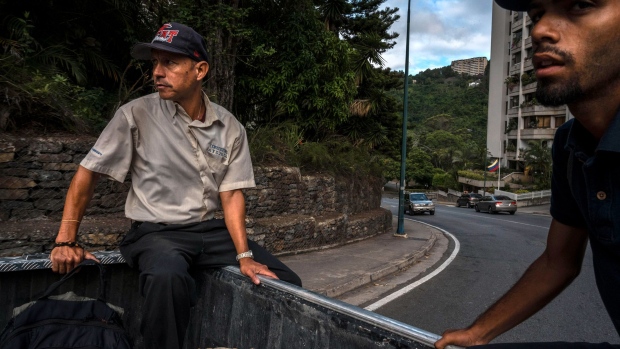 (Bloomberg) -- Editors Note: There are few places as chaotic or dangerous as Venezuela. “Life in Caracas” is a series of short stories that seeks to capture the surreal quality of living in a land in total disarray.

Thumb out, eyes squinting against the morning sun, Octavio Gomez looked more than a little forlorn, an old man in his two-sizes-too-big brown suit, as he stood on the curb. I pulled over and he climbed into my Chevrolet Cruze.

I’ve been picking up hitchhikers for months now. I just couldn’t keep driving by all the people trudging along in the hilly part of the capital where I live, so clearly desperate for a break from the grind of walking for hours, as some of them have told me, to reach their destinations.

Gomez was particularly hard to ignore, a skinny 72-year-old in that sad suit and very thick eyeglasses. He’s a lawyer and still goes to the office, though his firm is down to one other attorney and a secretary. His daughters and their families live in Spain and Panama. He and his wife scrape by.

“I spend all my money on food,” he said as we headed downtown. “I know it’s dangerous to ask for a lift in a city like Caracas, but I have to.”

My mom would tell me it’s just as dangerous to give a lift. But more and more Caraquenos are doing it, mostly for free. Our rideshare system is part of the gratis economy that’s sprouting all over town. We help each other out because we’re kind-hearted, or guilt-ridden, or worried about karma. Any one of us still with wheels is a dead-battery away from having to hoof it to get anywhere.

Venezuela doesn’t produce spare car parts anymore and most importers have closed up shop. In one of those cruel circular ironies, there are no longer shortages of fan belts or carburetors or tires but prices are prohibitively high. (Which is why there are no shortages.)

Meanwhile, the capital’s once largely efficient public transport system has fallen into ruin. Most buses in the fleet are out of commission; just ask anyone who’s waited in vain for hours at a stop. The so-cheap-they’re-practically-free subways, when they actually run, are too scary, said Alejandro Infante, 17, a student at Andres Bello Catholic University. “You could get robbed.”

He figures it’s safer above ground, even in a car with a stranger. He joined a Whatsapp group that alerts him when school mates are passing through his neighborhood and allows him to reserve a seat. If that fails, he stands on the street holding a hand-lettered sign that says “Plaza Venezuela.”

Some people go the signage route, others employ thumbs, a few actively wave motorists down. The men and women I talked to -- office workers, day laborers, retirees, all kinds of folks — said they’ve bummed rides in every kind of vehicle, from well-tuned sedans to garbage trucks.

Every now and then when my mind drifts, it goes back to the first passenger I ever picked up, a whip-thin elderly woman wearing a faded, flower-print dress and carrying sacks that looked half as big as she was. There was something that was just so sad about her. It was a quiet Saturday afternoon and she was on her way home from a long day as a housekeeper for a family that gave her nothing to eat and didn’t offer transportation to and from the job, as is becoming the norm for the few Caraquenos who can afford such luxuries.

Hungry, she’d scooped up a bunch of mangoes that grow wild around the city. As she prepared to get out of my car, she handed me a couple of them. When I got home that night, I cut one open. It was sweet and juicy and delicious.

To contact the author of this story: Alex Vasquez in Caracas at avasquez45@bloomberg.net

To contact the editor responsible for this story: Anne Reifenberg at areifenberg@bloomberg.net