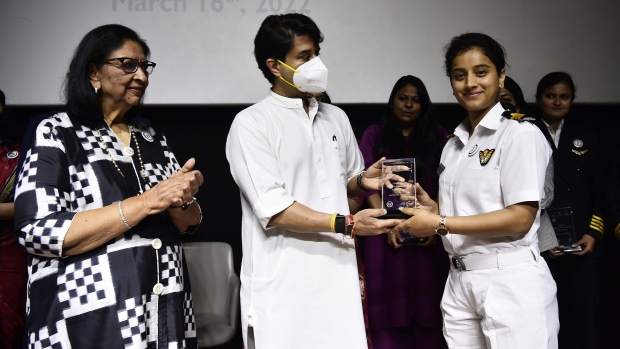 (Bloomberg) -- Nivedita Bhasin became the world’s youngest commercial airline captain in 1989 at the age of 26. The Indian pilot still recalls her early years when other crew would urge her to rush into the cockpit so passengers wouldn’t get nervous at the sight of a woman flying their plane.

Three decades after Bhasin’s career began, female pilots are no longer a rarity in India, making the country a success story when it comes to diversity in the airline industry. India has the highest percentage of female pilots globally, the International Society of Women Airline Pilots estimates, with about 12.4% of all pilots women, compared with 5.5% in the US, the world’s largest aviation market, and 4.7% in the UK.

The statistics raise questions about how a nation -- which placed 135th among 146 countries on the World Economic Forum’s ranking of nations based on gender parity -- was able to reverse the trend in this particular industry. Some of the answers may offer lessons for other countries and sectors striving to get more women into their ranks. Businesses that are more diverse tend to perform better, and some studies have even shown that female pilots have fewer safety incidents. Hiring more women could also help airlines address the staff shortages that are disrupting travel as the world emerges from the Covid pandemic and demand rebounds.

Trailblazers like Bhasin say Indian women are being encouraged by a string of factors from outreach programs to improved corporate policies and strong family support. Many Indian women were drawn to flying through an air wing of the National Cadet Corps, formed in 1948, a kind of youth program where students are trained to operate microlight aircraft. To make the expensive commercial pilot training more accessible to women, some state governments are subsidizing it and companies such as Honda Motor Co. give full scholarships for an 18-month course at an Indian flying school and help them get jobs.

“India has started decades ago recruiting women into STEM positions, including pilots,” said Michele Halleran, a professor and director of diversity initiatives at Embry-Riddle Aeronautical University in Florida. “In the U.S., we have only started the demand for a diversity movement in aviation because of our current drastic pilot and technician shortage.”

The Indian Air Force began recruiting women pilots for helicopters and transport aircraft back in the 1990s. It wasn’t until this year that they were allowed to take up fighter roles.

Some airlines in India are devising policies to retain female talent. IndiGo, India’s largest passenger airline, said it offers flexibility to women pilots and crew to continue working safely, excluding flying duties, during pregnancy. It gives 26 weeks of paid maternity leave that is required under law and also offers creches for childcare. Women pilots can opt for a flexible contract with two weeks leave in a calendar month, until a child is 5 years old.

Vistara offers pregnant pilots and cabin crew the option of temporary jobs on the ground or administrative roles until they are ready to fly, according to a spokesperson. It also gives paid maternity leave for six months and reimburses creche fees.

Some carriers also assign a driver and guard to drop and pick up women flying late at night, Hana Khan, a commercial pilot with an Indian airline, said.

Many female pilots in India also have a more prosaic explanation for their successes: Family support. India’s familial structure, where extended families often live together and grandparents and aunts often help raise children or manage households, is particularly helpful in an industry that demands long hours and regular travel away from home, pilots say.

“It’s no secret we have the support of parents and it’s a norm to hire staff,” said Zoya Agarwal, who got international media attention when she flew Air India’s first nonstop flight from San Fransisco to Bengaluru with an all-women crew last year. “Women like me can fly to San Fransisco for five days and not think about what’s happening at home. You have that comfort.”

The absolute numbers of women pilots still tend to be higher in developed countries than in India because airline markets in places like the US are much larger, with a bigger total staff of both men and women.

Still, hiring more women can ease a persistent deficit of pilots and airport workers that is forcing airlines to reduce and cancel flights, threatening to snarl the aggressive revival in traffic. Boeing Co. estimates that the world will need more than 600,000 new pilots in the next two decades.

Some believe the benefits might extend even further, and may already be contributing to India’s airline safety rankings, which exceed some developed nations.

The US had almost five times as many fatal air accidents as India since 1945, while the UK has had 15 more deadly incidents, according to Aviation Safety Network.

Some of the differences in statistics could simply be the outcome of the US being a larger aviation market than India as more flights increase the probability of accidents. Even so, many pilots believe that having a large percentage of women is at the very least helpful to safety.

A study called Gender Differences In General Aviation Crashes, which assessed airplane and helicopter crash data between 1983 and 1997, found that crash rates for male pilots exceeded that of women. Women operate aircraft “more safely” accounting for only 3% of accidents even as they constituted 10% of all US army helicopter pilots, according to Women in Combat Arms: A Study of the Global War on Terror, which compared the accident rates of men and female pilots from 2002 to 2013.

Bolstering diversity has the potential to make air travel safer because women often take a more measured approach to risk and are therefore involved in fewer accidents than men, said Halleran, the professor at Embry-Riddle Aeronautical University.

Kunjal Bhatt, chief flight instructor at Indian flight school Indira Gandhi Rashtriya Uran Akademi, said she found women trainees particularly “meticulous” and showing greater dedication to succeed because the stakes are higher for those who go against the social norms to pursue this profession.

Indian women who’ve succeeded in the airline industry are educating girls about aviation. Harpreet A De Singh, who became the first woman to head an Indian airline when she took charge of Alliance Air Aviation Ltd. in 2020, conducts outreach programs in schools to raise awareness about jobs including pilots, technicians and air traffic controllers.

“Over a period of time this consistent effort all over the country has led to large number of women choosing a profession some didn’t even know it existed,” Singh said.