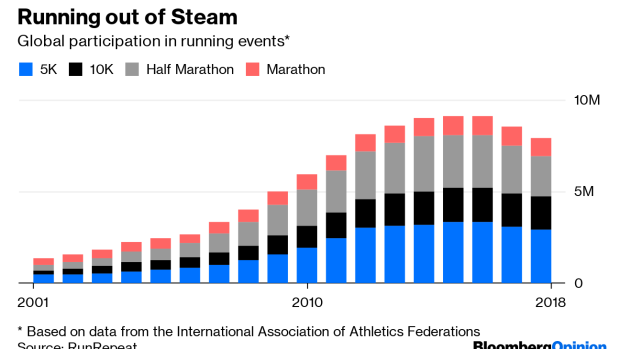 (Bloomberg Opinion) -- Midlife crises aren’t what they used to be. Serious running is in decline. One reason? Completing that marathon at the age of 40 may no longer confer the bragging rights it once did.

Researchers have in recent years noted a downward trend in the number of people participating in events like marathons and community five-kilometer races. In a 2018 paper, Heather Kennedy from Temple University and her collaborators dubbed the phenomenon a “running recession.”

Obviously, not everyone signs up for these races, but they are one of the few objective measures of interest in the activity. And, as Kennedy and her colleagues point out, events are, for many, a powerful motivation to keep training. At their peak, they represented a $1.4 billion industry that fed even bigger ones, from shoes and apparel to wearable devices.

Jens Jakob Andersen, founder of the website RunRepeat, analyzed the results of 70,000 road races in 193 countries since 1986 and observed a declining trend in the last two years. The total number of finishers was down 13% from 2016.

Andersen’s study, in collaboration with the International Association of Athletics Federations, includes data from 193 countries, but it isn’t complete. It excludes many lower-level gatherings like parkruns and charity races. But data from Running USA, which track a much larger number of events, still show a downward trend.

So what explains the decline? Boredom and the high fees to enter the most popular races have been identified in the media and academic literature as some of the causes. But there’s more to it than that. There are plenty of cheap events in any major city, and running has always been a rather monotonous pastime. The age distribution of marathon runners provides an important clue to what’s really going on.

In the early days of the running boom, particularly in the early 2000s, there used to be peaks around what Andersen calls “milestone ages.” As he explained to me:

In 2003, a lot of runners, proportionately, did a marathon when they turned 40, 50, 60. “I need to set myself a goal now that I'm turning 50. How about a marathon? It seems unrealistic but not impossible.” Today, that thought process isn't dominating anymore. The achievement element is in decline.

Millions of people have now completed a marathon, expanding what used to be an exclusive club of fanatical achievers to a crowd of more-or-less committed amateurs. When I applied to business school in 2002, having run 42 kilometers was something to put on your resume; now, it’s not even worth mentioning. As that cachet disappeared, extreme athletes moved on to other pastimes; ultra-marathons have boomed, and Ironman became a valuable brand.

There are other signs in Andersen’s data that achievement is no longer as important to runners as it used to be. Races are slowing down. Today, the average runner completes a 10K or 5K race at such a leisurely pace they might as well be walking – and I write as someone who completes a 10-kilometer run every week.

On average, male competitors in races of that length completed a mile every nine minutes and eight seconds in 2003. Last year, they took 48 seconds longer. For women, the pace slowed from 11 minutes per mile to 11:43. The figures for marathons, half-marathons and 5Ks show similar drops in speed.

Since participation has declined recently, these weaker results aren’t a sign that more relatively untrained people have taken up the sport. They suggest, to me, that runners are less interested in maximum exertion.

All this dovetails with the conclusions of the Kennedy paper, which includes results from a survey of participants in a U.S. event taken over seven years from 2011 through 2017.

“Participants are reporting less enjoyment and gratification from the physical act of running, placing less value on using running as a signal of self-concept and impression management, and reporting a diminished role of running as an important part of their life,” the researchers wrote.

In other words, the hobby is no longer something around which one can build a self-image or even something one can be particularly proud of – so, naturally, one feels less elation from the process itself.

For those who continue to sign up for events, they are an increasingly social pastime – an experience rather than a sport. Athletes mingle, make friends, and travel more to events in other cities.

As a regular runner who never signs up for any events, the social and experience elements feel a little alien to me. If there are many others like me, that, too, may explain why race participation is dropping off. On the other hand, the clannish culture of long-distance runners a decade ago – the clothes, the jargon and emphasis on training – was faintly ridiculous. Running, after all, is something a child learns immediately after walking. It isn’t rocket science; it’s not even as difficult as many other sports.

Perhaps the “running recession” is merely recognition of the pastime’s rather pedestrian place in our lives. We run to keep reasonably fit, and sometimes to meet other people and see places from a new perspective. That’s good enough. There’s no need to build it into an expensive, overly demanding fetish. Leave that bit to the pros.