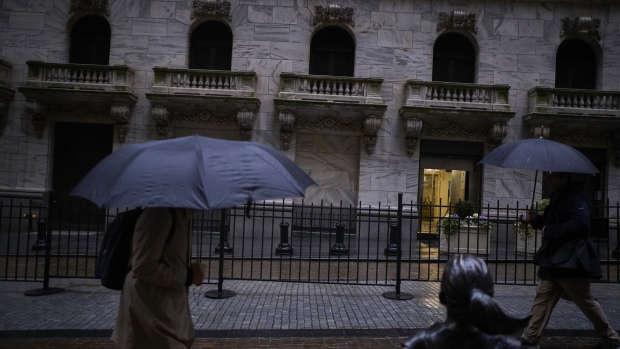 The silhouettes of pedestrians are seen in a puddle in front of the New York Stock Exchange (NYSE) in New York, U.S., on Friday, May 26, 2017. Foreign investors are coming back to the U.S. equity market in a big way after a two-year hiatus, lured by a softening dollar and diminishing odds that the Federal Reserve will hasten the pace of interest-rate increases. , Bloomberg

(Bloomberg) -- As the US economy slowly buckles under the strain of soaring interest rates, corporate bankruptcies will pile up. Few on Wall Street doubt this. The real question they have is which sorts of companies and industries will succumb first.

A good place to start looking: firms that went public via SPAC, that anything-goes world of speculative investing that’s come to represent the unbridled financial mania the pandemic wrought and the bust that followed. Bedrock AI, an investment research company that scours regulatory documents, pored through filings issued by hundreds of de-SPACs -- which are SPACs, or blank-check firms, that found companies to merge with -- and determined that more than 40% of them flagged questions about their own viability as going concerns, signaling a risk they could go out of business. (A few of them have since filed for bankruptcy.)

It’s a high percentage, more than double the rate of such filings by companies that went public via traditional IPOs over the same period, according to Bedrock AI. And it’s a reminder, analysts say, that fewer restrictions were in place and earnings forecasts were very rosy  -- targets of 50, 100, even 300-fold increases in revenue were common -- during a nine-month boom in which investors blindly bid up the value of just about anything SPAC financiers brought to market. With the Federal Reserve pushing up rates at the fastest pace in decades and demand in the economy cooling, those projections look even more unrealistic now.

“There was so much SPAC capital looking for deals that they were lowering the bar for companies that they were partnering with because they were highly motivated to get a deal done,” said Greg Martin, co-founder of Rainmaker Securities, a merchant bank focused on private securities deals. “You’ll see a greater-than-expected percentage of bankruptcies.”

Investors’ enchantment with SPACs, and de-SPACs, came to an abrupt end early last year, right about the time that another pandemic favorite, meme stocks, started tanking, too. An index that tracks de-SPACs is down 62% this year and 82% since hitting a peak in February 2021. All told, more than one-quarter of the roughly 400 companies that merged with a SPAC are now trading below $2 a share, just a fraction of the $10 mark the blank-check companies typically go public at.

Battered share prices paired with soaring interest rates may put companies with fragile balance sheets in jeopardy. More than 75 former SPACs are already likely to need more financing in the next year in order to just keep operating, according to data compiled by Bloomberg that estimates a company’s cash needs.

Biotechnology firms, companies pushing electric-vehicles, and those who hoped to ride the ESG hype are most at risk based on cash on hand and their current spending habits, the Bloomberg data show.

Canoo Inc., an electric-vehicle startup that has a pact with Walmart to sell electric vans, had just $34 million in cash as of June 30. A month earlier, it issued a warning about its ability to continue as a going concern. However, it does have options to access at least $500 million: one through a deal with hedge fund Yorkville Advisors and a mixed securities shelf registration. Its stock has sunk 90% since its December 2020 debut to $1.87 and it reported a net loss of $289.8 million in the first six months of the year.

View Inc., a maker of smart-glass products, has just $111 million in cash and is seeking to raise additional capital while warning in a file dated Aug 8 of its ability to fund operations beyond next month. The company has reported a net loss of more than $135 million so far this year. Its stock closed at $1.34 on Tuesday. When it debuted back in March, it traded near $9.

Representatives of Canoo and View didn’t reply to emails or a phone call seeking comment on their funding and stocks’ performances.

Since June, two firms that merged with SPACs filed for bankruptcy after less than a year of being public. Retail startup Enjoy Technology Inc. and electric-vehicle firm Electric Last Mile Solutions Inc. met the same fate in June. While Packable Holdings LLC, an ecommerce company backed in part by Carlyle Group, started to wind down operations in August after a blank-check merger collapsed.

“With these market conditions there are a lot of companies that are going to need to go away or recapitalize,” said Mike Bennett, managing partner at investment banking firm Crewe Capital. “There really are less options or no options for some industries like pre-profitable tech unless you’re an outlier or focused on industries doing well even with the market conditions.”

Many of the SPAC industry’s most savvy investors are opting to eat millions in losses and close their doors. Serial dealmaker Bill Foley joined “SPAC King” Chamath Palihapitiya, Bill Ackman and Sam Zell when he said he’d return roughly $2.1 billion to investors and shutter a pair of blank-check firms. At least 23 blank checks have liquidated in 2022, more than double the total seen over the five previous years, data compiled by SPAC Research show.

Despite the malaise, some SPAC deals continue to lure in investors. LiveWire Group Inc., the electric motorcycle business spun off by Harley-Davidson Inc., has been among those able to complete mergers. While the spinoff raised less than was planned, it’s share price has clawed back the bulk of an initial three-day slide. It closed at $9.63 on Tuesday after falling to $8.25 in its debut session.