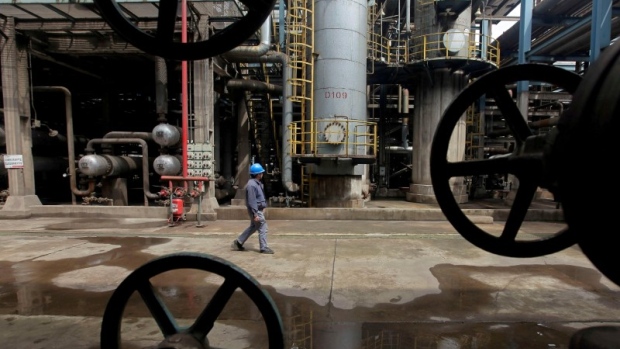 A worker walks past oil pipes at a refinery in Wuhan, Hubei province March 23, 2012. , REUTERS/Stringer/File Photo

The recent resurgence in oil prices isn’t enough to get one Bay Street veteran back on board with crude. In an interview on BNN, David Baskin, president of Baskin Wealth Management, said his firm has been steering clear of any oil exposure for some time, and a six per cent bounce in crude over the last month isn’t enough to convince him it’s time to get back in.

“We’re zero-weighted in energy, have been for two and a half years now,” he said Monday. “We think that the long-term fundamentals for oil are very negative, particularly for Canada, which is in many cases a high-cost producer.”

Oil prices have been bolstered recently by a combination of U.S. dollar weakness, which typically increases demand for commodities priced in greenbacks, and four consecutive weeks of U.S. inventory drawdowns. Canadian producers have been further encouraged by the narrowing of Western Canadian Select’s discount to the West Texas Intermediate benchmark, which now stands at US$10.20 per barrel.

In spite of the encouraging near-term signals, Baskin said there are fundamental, structural issues tied to long-term crude demand. Baskin said the roll-out of Tesla’s (TSLA.O) Model 3 electric car is emblematic of the headwinds the overall oil extraction industry is facing, and that he sees further erosion of demand as electric car adoption increases.

“This is just the way of the future. So much of oil production is used for automotive fuel; what we’re seeing is really, I think, the beginning of the end of the internal combustion engine,” Baskin said. “All the big automakers are moving towards electric, or at least toward hybrid.”

“There’s going to be a lot more electric cars.”