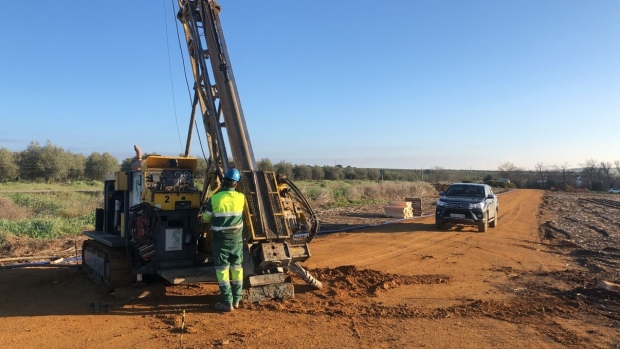 Drilling at the La Romana target , Image courtesy of Market one Media Group

Mining exploration is tough at the best of times but conducting field work during a pandemic can bring progress to a halt, even if you're in Elephant Country.

The impact of the COVID-19 crisis hit the mining industry hard around the globe in 2020.

One of the hardest-hit countries in Europe was Spain. All sectors of the economy suffered last March when the Spanish government ordered a lockdown as COVID-19 cases soared. While some mining operations were deemed essential, the difficulties in keeping workers safe and other challenges forced companies like Atalaya Mining and Almonty Industries to temporarily shut down.

“I think it's a case of onward and upward and this thing's just going to keep getting bigger."
– Eric Coffin, President, Hard Rock Analysts Advisors.

Despite the problems posed by the pandemic, one Canadian junior mining company met the challenge in Spain and, as a result, has positioned itself to explore and develop one of the few new copper discoveries on the planet. Now it's poised to discover if it really is in Elephant Country, the land where big deposits merge into monster mining projects.

Vancouver-based Pan Global Resources Inc. (TSXV: PGZ | OTC: PGNRF) found ways to continue an aggressive exploration and drilling program throughout the COVID-19 pandemic at their Escacena project by adopting strict measures and protocols to ensure the health and safety of their team. The company didn't lose any operational days ­– a point of pride for Jim Royall, Vice President, Exploration.

"We observed social distancing and masking and those who could work from home did. We also kept our bubbles as tight as possible," says Royall.

"We haven't lost a single day and we've had zero infections, which is fantastic and a credit to the team."

As a result, Pan Global's drilling program at Escacena in the heart of Spain's Iberian Pyrite Belt–one of the most important volcanogenic massive sulphide districts in the world—has been able to find high copper grades near to the surface, making it an excellent target for open pit mining. With each new test result from the La Romana target, the potential size of the mining operation, like the universe, just keeps expanding.

"We're hitting copper with every hole and the system is expanding with every drill hole," says President and CEO, Tim Moody.

"We're starting to show La Romana has real significant size potential as well as the potential to find additional discoveries and that's another strong feature of the project."

The Escacena project's 2020 exploration program results highlight the growing size potential of the La Romana target. With only one target tested and every drill hole hitting copper, the geophysics show the deposit is open in all directions. It's shaping up to be a major deposit, comparable in size to some of the region's biggest ore bodies.

"The results have continued to show significant near-surface mineralization as well as some deeper, very high-grade sections. It was a very successful program and we've planned another 20-hole drill program this year.”
— Tim Moody, Director, Pan Global Resources Inc.

By the end of 2020, some 28 drill holes were completed at the La Romana target. To the east, results showed the near surface copper mineralization is expanding and could add significantly to the size for a potential open pit. To the northeast, several consecutive drill holes intersected exceptionally high-grade massive chalcopyrite within a broader zone of copper mineralization.

"The results have continued to show significant near-surface mineralization as well as some deeper, very high-grade sections. It was a very successful program and we've planned another 20-hole drill program this year, which we're well into at the moment," says Moody.

Because only a small portion of the potential target has been tested, the 2021 drill program will seek to expand the copper mineralization in all directions and further test the geophysics targets with a mixture of pattern drilling and larger step out holes. The initial 20-hole drill program is expected to be substantially expanded and is fully funded.

In May, the company announced its latest drill results, which came from four new holes (LRD38, LRD39, LRD40 and LRD42) at the La Romana target. Of particular interest is hole LRD40, which showed a significant thick zone of copper mineralization approximately 50 m east and along strike from hole LRD39.

While Pan Global continues to put in the work to determine if it has a monster on its hands, the company is encouraged by the fact they're surrounded by a herd of elephant-sized mining operations.

The La Romana discovery is surrounded by other large mines like the giant Corta Atalaya mine 23 km to the northwest, the Las Cruces mine about 15 km to the east and the Aznalcollar-Los Frailes project where Grupo Mexico is hoping to restart mining. The area also has excellent infrastructure.

Having so many productive neighbours gives Pan Global options. A discovery in the Escacena project area has the potential to either provide feed to one of the other nearby mining centers or to become a stand-alone mine.

Those options are being weighed by management, but their priority now is to see how big the La Romana deposit is while hoping to make a new discovery once exploration commences on other targets in the project area.

"It's nice to have those options, but our focus is on getting a better idea of the size of the deposit and the distribution of the mineralization before trying to think too much about the economics," says Royall.

"It just makes sense that before you go with an option, raise money or go into operation, you should have a good idea of what you've got on your hands."

That's exactly what Eric Coffin, President of Hard Rock Analysts Advisors, thinks Pan Global should be doing. The respected mining industry analyst says the company has more work to do, but it's getting the right results in the right region.

"The Iberian Pyrite Belt is elephant country—this is the Land of the Giants," says Coffin.

"Pan Global is reporting numerous drill holes that are 20 to 30 m in depth at good grades, so there's definitely going to be an open pit component there in the future and those kinds of grades will create revenue. I think it's a case of onward and upward and this thing's just going to keep getting bigger."

Another thing Coffin and Pan Global will be looking for is the amount of tin in future drilling results. Significant levels of tin are turning up at La Romana in addition to copper. While tin in and of itself is valuable — with a looming shortage, the price of tin hit a 10-year high of USD$ 28,000 per tonne in February—it's also indicative of rich mineralization in the Iberian Pyrite Belt.

"It's not completely understood why, but the largest deposits in the belt all have tin in them. So, the fact they're hitting tin is a good sign in terms of their potential scale," notes Coffin.

Coffin says he'd be surprised if Pan Global's progress isn't on the radar of several big metal majors. He believes they're not only monitoring results at La Romana but waiting to see what happens once the company starts exploring its neighbouring Al Andalus area, which is in the permitting stage.

"Al Andalus is the big one. Once they get that granted, they'll be looking to see if there's supergene mineralization, so that could be a pleasant surprise," says Coffin.

Both Moody and Royall are eager to start work on the Al Andalus area once permits are issued to potentially add yet another copper discovery to their portfolio.

Once completed, Pan Global will have a clearer picture of the size potential and could begin planning for resource delineation while also getting a start on some of its other targets.

"I'm confident the results will expand the project in several directions and then we'll be in a much better position than to start looking at look at potential mining scenarios," says Moody.

Some of the results from our La Romana target:

All that activity has Pan Global entering 2021 at full throttle and anticipating a potentially pivotal year where an early exploration project progresses into a more advanced and significant copper discovery at La Romana.

Moody says investors should keep an eye on the numbers coming out of the drilling program and is hopeful that exploration at Al Andalus will see the company make its next discovery before the end of the year.

"There are going to be many new results to look forward to and the other key thing for us will be the granting of the Al Andalus area, where we've got a very good chance of making another discovery," he notes.

An ambitious drilling program and other exploration work is not the only factor that will keep Royall busy this year. There's also the incentive of a strong market for copper and good local support for new copper discoveries. The company has already begun to increase the size of the team on the ground. And, backed with an increased private placement financing of $13 million (previously announced at $10 million) due to strong demand, Pan Global’s future is looking promising.

After all, when you're looking for monsters, you need all the help you can get.

"The Iberian Pyrite Belt is one of the oldest mining districts in the world. Mining has been in semi-continuous operation for the last 5,000 years. That's the district around us, so you know we're definitely in Elephant Country," says Royall.