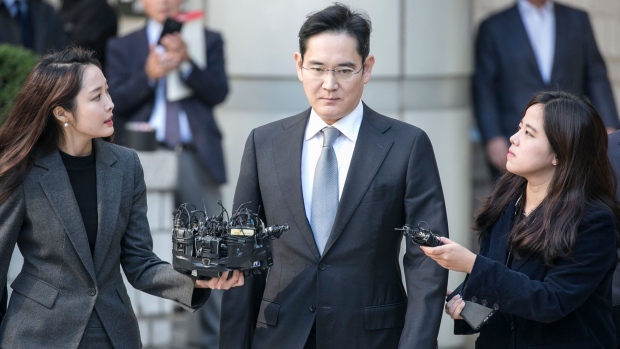 (Bloomberg) -- Samsung Group’s billionaire scion, Jay Y. Lee, is embroiled in an increasingly contentious legal dispute with South Korean prosecutors over allegations of bribery and corruption. The clash, which dates back to 2015, centers on whether Lee and Samsung used illegal means to help him take control of the conglomerate founded by his grandfather. On Monday, in the Seoul Central District Court, prosecutors will argue that Lee should be sent back to jail, where he already spent about a year before going free in February 2018, while Lee and his lawyers will argue he should not be arrested during the proceedings.

Lee, 51, is the vice chairman of Samsung Electronics Co. and heir apparent at South Korea’s most powerful conglomerate. After his grandfather founded the company, his father led the group until he suffered a heart attack in 2014. The elder Lee has reportedly been in a coma since then, while his son has become the de facto leader. But his succession has been complicated because he can’t simply take over his father’s assets. South Korea has one of the heaviest inheritance taxes in the world, 50% on estates of more than $2.5 million. The elder Lee’s net worth is about $18 billion, according to the Bloomberg Billionaires’ Index.

2. What is the legal dispute all about?

South Korea’s special prosecutors first indicted Lee in early 2017 on charges of bribery and corruption, alleging that Samsung provided horses and other payments to a confidante of the former president to win support to help ease his succession. The case inflamed public opinion against the country’s powerful conglomerates, or chaebol, and triggered the impeachment of then-President Park Geun-hye. Lee was initially convicted and sentenced to five years in prison, but the sentence was suspended in 2018 and he was released from jail. Still, the case wasn’t over. The Supreme Court in August 2019 overturned the lower court’s decision to suspend the mogul’s sentence and ordered a retrial of the whole case. Those hearings have been delayed because prosecutors have argued that one judge involved is biased and inclined to go lightly on Lee. The Supreme Court now needs to decide whether to keep the judge involved or replace him, which could mean the trial would drag into next year.

3. Why do prosecutors want to jail Lee?

Prosecutors are seeking the arrest warrant to send Lee back to jail because of a separate but related investigation. They argue that Lee should be imprisoned during the proceedings for the new allegations. However, their request for the warrant came just days after Lee requested a public assessment of the validity of his indictment, essentially trying to bypass professional prosecutors by appealing to a review committee that would be made up of outside experts. The attempt to jail Lee is seen by some experts as a reaction to his request.

4. What is the other case against Lee?

Separate from the original bribery investigation but also related to succession, prosecutors are digging into the details of a controversial merger between two Samsung Group’s units in 2015 and alleged accounting fraud that may have helped Lee’s efforts to gain control. The probe kicked off after South Korea’s financial regulator concluded that Samsung Biologics Co. intentionally violated accounting rules and inflated its value ahead of an initial public offering. Prosecutors suspect the violation was to justify the merger ratio between the Biologics’ major owner Cheil Industries and Samsung C&T, which helped bolster the value of the heir’s stake in Cheil and his influence at Samsung Group. The Biologics unit has said it didn’t violate accounting standards.

5. What’s at stake for Samsung?

Samsung has largely continued business as normal during the years-long probe, and investors have been mostly unfazed. Samsung Electronics’ shares soared during 2019 and into the first months of 2020 before the coronavirus pandemic, despite prosecutorial scrutiny and investigations into more than a hundred of group officials. The potential jailing of Lee is a greater concern for Samsung because his absence would render it more difficult to make major decisions, such as mergers and acquisitions or extraordinary investments. A request from Lee’s lawyers for a public assessment of the validity of his indictment could delay the resolution: If the panel is formed, it will make an assessment and give recommendations to prosecutors in coming months.

6. How does public opinion affect the situation?

Samsung is fighting not just for Lee’s liberty, but for its corporate reputation. The allegations that it used gifts to buy government favor so one of the country’s richest men could take over his family’s company are so explosive they inflamed public opinion against major South Korean companies and shook the political balance of the nation. Samsung and Lee are determined to clear their names. The scion made a rare, personal apology in May, admitting missteps in the past and pledging not to hand leadership of the group to his children. Samsung has also been very active in helping South Korea’s battle against the coronavirus, dispatching its own doctors to help in the fight and helping to ramp up production of testing kits.