Why tech still has room to grow - BNN Bloomberg
{{ currentBoardShortName }}
Markets
As of: {{timeStamp.date}}
{{timeStamp.time}} 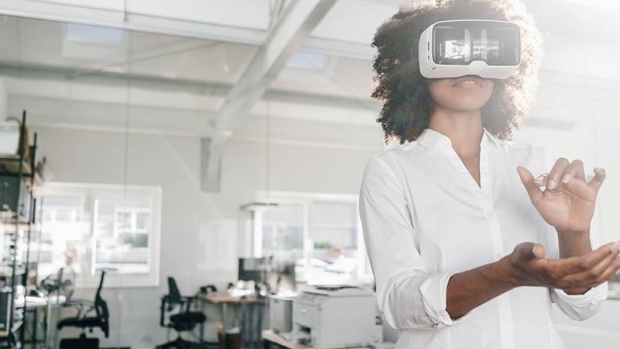 Why tech still has room to grow

It’s been a tough six months for technology stocks, with many of the names that soared during the pandemic now facing some challenges. Tech darlings like Meta, Netflix and Amazon have fallen considerably from their September highs, according to S&P Capital IQ. Many investors fled technology for hotter plays like commodities and financials as the prospects of higher yields brought tech valuations into question.

However, tech stocks, despite their recent decline, are not passé. Many of these companies still occupy a large and growing presence in people’s lives, as shown by their latest round of earnings, which were still generally positive. That’s why investors shouldn't dismiss owning tech in their portfolios, says Vitali Mossounov, vice-president and director and global technology analyst with TD Asset Management Inc. (TDAM).

“Investors should be looking at tech and saying, ‘Do I believe that the trends of innovation and invention that have driven superior earnings growth and share price returns over the last decade will continue over the remainder of this decade? I believe that will be the case.”

While no one likes to see the stocks that have driven most of their portfolio growth over the last few years tumble, Mossounov isn’t lamenting the decline. The way he sees it, technology’s mega-caps – the blue-chip names like Apple, Amazon, Microsoft and Alphabet – are now available at a discount to their fair value. And many of the next generation of innovators that are in the early to middle stages of their growth cycle? “Some of these companies are attractive,” he says.

It may take a while for tech stocks to climb again, but Mossounov believes they will. Over long periods the technology sector has consistently outperformed the broader equities market. In the 10 years ended in 2021, for example, the tech-heavy NASDAQ 100 produced an annualized return of 23.2%, compared to 16.5% for the S&P 500, according to S&P Capital IQ. Over the last three years, the S&P 500 Information Technology sector index climbed 168% compared to 83% for the overall S&P 500.

Technology as a sector posts outsized returns by upending the old business models of other industries or creating entirely new goods and services that we didn’t know we wanted. Few, if any, could have predicted the marvel of what is the modern consumer's life: endless libraries of content available for instant streaming or a supercomputer in the palm of their hands.

One issue with many tech stocks is that many are volatile. Because expectations for growth are so high, if a company underperforms in a quarter or two, investors will get nervous and sell, even if the long-term potential is still there. That makes investing in single tech stocks risky – you never know which one will fall out of favour and when.

For Canadian investors, until recently there was no easy way to get pure exposure to the world’s leading technology stocks. You could have invested in a NASDAQ-100 index fund, but that included non-tech equities like Starbucks or CSX Railway, too. That’s why Mossounov and his colleagues began work in 2019 to help design a custom index of the world’s largest tech stocks, regardless of the stock exchange they traded on – something that would not only bring together the so-called FAANG stocks (Facebook, Amazon, Apple, Netflix and Google), but also other technology champions in developed markets. The index became the basis for the TD Global Technology Leaders Index ETF (TSX:TEC), launched in May 2019.

Buoyed by the popularity of the fund – in just under three years it’s become one of the largest technology-focused ETFs in Canada – the team devised a second index fund to target the next generation of tech leaders, made up of the 100 fastest-growing technology companies with market capitalizations between $750 million and $500 billion.

They wanted to build on the success of TEC by providing investors diversification through exposure to faster-growing, more disruptive technology companies and not the big tech names common in so many portfolios. The TD Global Technology Innovators Index ETF (TSX:TECI) made its debut last fall, around the time tech valuations were reaching their recent peak.

“That ETF launched at a poor time,” Mossounov reflects. But with many of its constituent companies growing revenues at a 30%-plus clip, he believes TECI will prove its worth in time.

The correction we’re seeing in many technology stocks may not be about the sector so much as its growth orientation. Non-technology growth stocks trading at substantial premiums from their industry peers, such as Nike and Costco, have also been affected.

Technology can be potentially volatile at times, as any single sector can be, and can go through long investment cycles. It took 15 years for the NASDAQ Composite Index to recover from its high reached in March 2000. But the circumstances at the height of the dot com bubble were different and bear little resemblance to today’s market, Mossounov says. At that time the earnings multiple on the NASDAQ was double that of the broader S&P 500; today the NASDAQ carries just a 20% valuation premium.

Tech’s valuation against the bond market was similarly out of whack back then. “In March of 2000, when you were buying the NASDAQ, you were getting an earnings yield of a percent and a half when you could have gotten a risk-free return of 6.5% buying 10-year Treasury bills,” he says. “Today, the 10-year yield is at 2%, and the yield on the NASDAQ is 3.5% to 4%.”

Furthermore, the composition of the NASDAQ is markedly different from two decades ago. Then, many companies’ business models were unproven; today’s NASDAQ is dominated by enormously profitable titans with recurring revenues and wide moats.

Mossounov thinks that some tech valuations did get a bit frothy in 2020 and 2021 as the pandemic steered consumer spending in new directions. He also allows that rising interest rates contributed to the tech sell-off by increasing the discount applied to future-dated earnings potential in today’s dollars.

However, the technology leaders that make up TEC are highly profitable today. Plus, the stocks that have historically been able to grow through inflationary periods are those that are able to pass on their rising costs to their customers without suffering their own cost inflation, and a great number of tech stocks tick that box.

As for the mid-sized, higher-growth stocks that make up TECI, two or three may turn out to be the next Google or Facebook, though others won’t be as lucky. That’s why it may be wise to hold an ETF with 100 names in it rather than a few individual stocks – the idea of diversification is that your winners will outweigh your losers. TECI was built in a way that leverages metrics that have been hallmarks of many winning companies, like superior revenue growth, return on invested capital, and margin expansion. By choosing the top 100 companies based on these metrics, you don’t have to get lucky to catch the next wave of innovation.

Certain statements in this document may contain forward-looking statements (“FLS”) that are predictive in nature and may include words such as “expects”, “anticipates”, “intends”, “believes”, “estimates” and similar forward-looking expressions or negative versions thereof. FLS are based on current expectations and projections about future general economic, political and relevant market factors, such as interest and foreign exchange rates, equity and capital markets, the general business environment, assuming no changes to tax or other laws or government regulation or catastrophic events. Expectations and projections about future events are inherently subject to risks and uncertainties, which may be unforeseeable. Such expectations and projections may be incorrect in the future. FLS are not guarantees of future performance. Actual events could differ materially from those expressed or implied in any FLS. A number of important factors including those factors set out above can contribute to these digressions. You should avoid placing any reliance on FLS.

Commissions, management fees and expenses all may be associated with investments in ETFs. Please read the prospectus and ETF Facts before investing. ETFs are not guaranteed, their values change frequently and past performance may not be repeated. ETF units are bought and sold at market price on a stock exchange and brokerage commissions will reduce returns.

All trademarks are the property of their respective owners.

®The TD logo and other trademarks are the property of The Toronto-Dominion Bank or its subsidiaries.