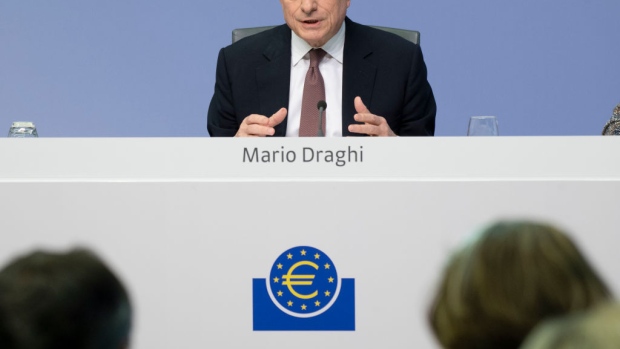 FRANKFURT AM MAIN, GERMANY - MARCH 07: Mario Draghi, President of the European Central Bank (ECB), speaks to the media following a meeting of the ECB Governing Council at ECB headquarters of March 7, 2019 in Frankfurt, Germany. Economic growth in the Eurozone group of nations has stalled, partially due to uncertainties caused by the tariff conflicts initiated by the administration of U.S. President Donald Trump, both with China and the European Union. (Photo by Thomas Lohnes/Getty Images) , Photographer: Thomas Lohnes/Getty Images Europe

(Bloomberg Opinion) -- The European Central Bank on Thursday announced four dovish policy measures that went beyond what markets had expected. At the conclusion of its policy meeting, the bank stressed that its extraordinary steps would be highly responsive to data and provide greater policy optionality. The markets will most likely hear messages that have broader implications.

The ECB said it would introduce a new round of targeted longer-term refinancing operations, known as TLTROs, that provide additional funding to banks; push back to December the guidance on a first interest rate hike; reinvest in full the maturing principal payments; and operate fixed-rate tender procedures with full allotment.

In explaining the bold move, ECB President Mario Draghi stressed the risks of economic weakness driven mostly by external factors. This weakness was highlighted by the fall in inflationary expectations and, more visibly, the sharp reduction in the central bank’s euro-zone growth projection for 2019 to 1.1 percent from 1.7 percent -- a relatively dramatic cut that remains accompanied by “pervasive uncertainty,” according to Draghi, and that highlights the risks of economic “stall speed” (especially if, like me, you fear that a further cut in growth projections is likely).

The markets’ textbook initial reaction to the policy announcement reflected the potential impact of increased central bank liquidity: Government bond yields fell, stocks moved up and the euro weakened. The stocks rally reversed when Draghi detailed the darker growth and inflation outlook during his press conference, pointing to weaker fundamentals that offset the initial market focus on more ample liquidity. Following his comments, yields for 10-year German government bonds fell to levels not seen since 2016.

Markets generally expected a dovish signal from the ECB given the projected flagging of euro zone growth and inflation, but they didn’t expect it to come as soon or be as comprehensive. They will likely have three major takeaways:

The great hope was that, after an unusually prolonged period of reliance on unconventional monetary policies (which, almost by definition, don’t offer sustainable solutions but merely buy time at the risk of collateral damage and unintended adverse consequences), central banks would be able to hand off policy responsibility to those with more effective tools, such as governments and legislatures. Instead, and as demonstrated again Thursday by the ECB, central banks remain stuck in a morass that is as much political as economic in nature, if not more so.

To contact the author of this story: Mohamed A. El-Erian at melerian@bloomberg.net

To contact the editor responsible for this story: Max Berley at mberley@bloomberg.net

Mohamed A. El-Erian is a Bloomberg Opinion columnist. He is the chief economic adviser at Allianz SE, the parent company of Pimco, where he served as CEO and co-CIO. His books include “The Only Game in Town” and “When Markets Collide.”