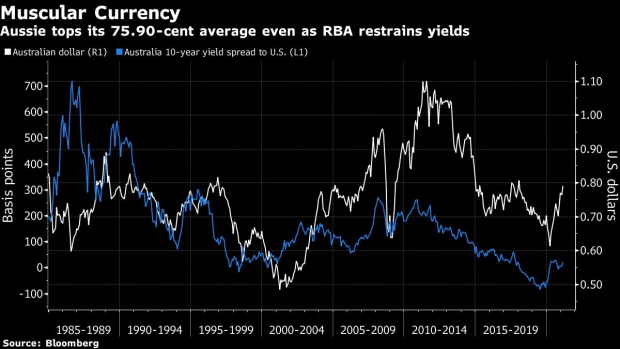 Pedestrians walk past the Reserve Bank of Australia (RBA) headquarters in the central business district of Sydney, Australia, on Wednesday, May 15, 2019. Australia's economy has been weighed down by a retrenchment in household spending as property prices slump and slash personal wealth. An election Saturday is likely to see the opposition Labor party win power and lift spending further. , Bloomberg

(Bloomberg) -- The Reserve Bank of Australia would really prefer if its currency didn’t trade above 80 U.S. cents, eroding the competitiveness of its exports sector just as the economy is trying to recover from the pandemic.

Since its float in December 1983, the Australian dollar has averaged 75.90 cents. Given this history, Australians tend to think that a 7 in front of it is about right; an 8 is getting high, while a 6 means something significant is happening offshore or there are problems at home.

“The conversation around the Aussie changes when you leave the 70s,” said Sean Callow, senior currency strategist at Westpac Banking Corp. in Sydney. “The RBA might be dismayed by the break of 0.80 but given the commodity price backing is so strong, they should take some comfort that the A$ doesn’t seem overvalued. It’s a headwind, but they saw worse in 2011-12.”

The floating exchange rate acts as the economy’s shock absorber: it slumped to 55 cents in March last year as Covid-induced market turmoil peaked. Since then, it has surged more than 40% as central banks pumped monetary stimulus, authorities suppressed the virus and commodity prices rebounded on a wave of global liquidity and Chinese demand. The currency last hit 80 cents in 2018.

“A number as round as 80 cents is a milestone,” said Callow. “You also have the likelihood of options strikes or stop losses around that figure.”

A large build up of options contracts that give traders the right to sell as much as A$4.3 billion of the currency at 79 cents remain in play until Friday, which is likely to slow its ascent over the next few days.

Even with Australia’s borders closed for almost a year now, shutting down the country’s top services exports of international education and tourism, currency appreciation is still a worry, according to Ian Harper, who sits on the RBA’s board.

“Has the weight that’s placed on what might happen to the exchange rate, when thinking about how quickly the bank achieves its objectives, has that changed? Well no,” said Harper. He points out services only make up 25% of exports. The other 75% are commodities.

Trade statistics show that exporters with limited market dominance are already impacted by the eroding competitiveness.

The RBA has made no secret that it had the currency partly in mind when it launched a A$100 billion ($79 billion), six-month quantitative easing program in November targeting longer-dated bonds.

The central bank followed up earlier this month by announcing another A$100 billion of purchases from mid-April, when the current program ends. Christopher Kent, who oversees financial markets at the RBA, reckons the currency would’ve been higher without these QE program.

“Historical relationships with commodity prices would have implied a much larger appreciation of the Australian dollar,” Kent said on Feb. 17. “While history only provides a rough guide, this difference suggests that the bank’s policy measures have contributed to the Australian dollar being as much as 5% lower than otherwise, in trade-weighted terms.”