Why Trigon Metals has found Morocco to be more than a tourist mecca - BNN Bloomberg
{{ currentBoardShortName }}
Markets
As of: {{timeStamp.date}}
{{timeStamp.time}} 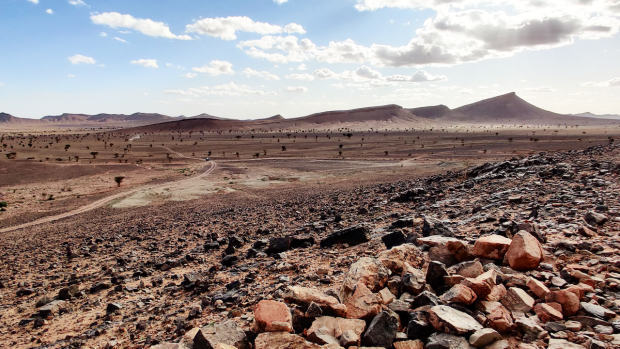 “Silver is now, copper is soon,” says Jed Richardson, President and CEO of Trigon Metals Inc. (TSXV: TM), which holds both of these assets in two of the most mining-friendly jurisdictions in Africa: A newly acquired high-grade silver asset in Morocco and a past-producing copper asset in Namibia.

With the definitive agreement to acquire a 100 per cent interest in the Silver Hill property in silver-producing Morocco signed in May, Trigon’s strategy is to develop its assets in that order. After spending two years restructuring the company with the help of Larisa Sprott on the company’s board, Richardson attracted the backing of Larisa’s renowned father, resource investor Eric Sprott, who now holds 20 per cent and Silvercorp with seven per cent.

Richardson, formerly a precious and base metals analyst for Sprott and Cormark, spent about seven years going back and forth to Morocco, evaluating assets with two local geologists, before settling on Silver Hill.

“We have surface samples at Silver Hill that are showing fantastic silver and copper grades — copper from 2-12 per cent and silver grades from 200 g/t to 750 g/t.”

Why silver now? Why Morocco? First off, according to the Silver Institute, this relatively small country produced 8.1 million oz (Moz) of silver in 2019, which is about 70 per cent of Africa’s silver.

What’s more, Morocco also hosts the largest silver mine in Africa, Imiter, which alone maintained a 2017 production of 7.8 Moz (242 t), making it the ninth-largest primary silver producing mine in the world.

As a commodity, silver bull markets typically trail those of gold, which is experiencing a significant bull rally in light of the unstable global economies as a result of COVID-19. A historic look back of Thomson Reuters data shows that in the last gold bull market beginning in 2008, gold rallied 164 per cent in 748 days, meanwhile silver gained 357 per cent in the same period.

Similarly, looking at the iShares MSCI Global Silver Miners Fund in the last year, it has risen from roughly $9 to $12, or only 33 per cent so far. If history is to repeat itself, the stars could align themselves for silver-focused mining and exploration companies, of which there are far fewer compared to gold equities.

Despite a silver-rich history, Richardson sees untapped potential in Morocco. As an analyst, it harkens him back to the under-explored projects 20 years ago in Mexico. “I took lots of trips to Mexico at a time when there were very few Canadian-listed companies there,” he notes.

“There were tiny mines operated by old established families scratching away on massive deposits, those that have turned into First Majestic, Endeavor, and Mag Silver, among others. They bought these assets from family-owned operations in Mexico and developed them into something they could never achieve.”

He adds, “Morocco feels like that. You can literally drive the highways and see the geology as you’re passing by, and maybe you’ll see an operation on these things, but the real potential of these projects is unknown. There’s not even a comprehensive geological survey of the country of Morocco.”

Richardson believes people like to invest in regions they have come to know and trust from travel. “A lot of the French companies have their head offices for their African operations in Morocco. In many ways, the country functions as a part of Europe — it provides all the fruits and vegetables for much of Europe.  It’s also straightforward to do business for Western companies but has unfortunately been ignored geologically.”

He adds, “The scarcity of new silver-rich discoveries globally, and Morocco’s status as offering potential to host economically attractive deposits, (the Imiter mine; the largest silver mine on the African continent, serving as an example), underpins the significance of Trigon’s exploration efforts in Morocco.”

A newly acquired project offering excitement for the future

The Silver Hill project, located in the prolific Anti-Atlas belt of Morocco, encompasses 16 km2 of previously explored ground where Trigon has identified three structures that they have followed; the top of which is also the longest at 4 km right at the surface.

“We have surface samples at Silver Hill that are showing fantastic silver and copper grades, copper from 2-12 per cent copper and silver grades from 200 g/t silver to 750 g/t silver.”

Richardson and his team of local geologists found this property, and others, by looking at properties with slag, a by-product of silver extraction, identified at the surface, where ancient mining took place. The team found piles of slag all over the two properties that Trigon ultimately acquired: Silver Hill and Tamadoult.

Richardson notes, “We have found samples at the surface from ancient mining that are grading around 2.5 per cent copper. We think there was historic mining of silver from this deposit at Silver Hill from the ancient shafts and adits that go into the side of the hill.”

Upon acquiring the property, there were seven shallow drill holes completed by geologists that have not been assayed. Richardson and his team found a large amount of sulphide mineralization in the core, which is characteristic of high grades with intervals of 2-3 m of mineralization.

Sending the core to the lab to be tested was delayed due to the COVID-19 pandemic in February. With travel and work restrictions now lifting in Morocco, the company is picking up where it left off, and expects the results relatively soon.

Moreover, permitting in Morocco is straightforward, according to Richardson. “We have the potential to emerge with a full mining licence at Silver Hill in a couple of months, even though it’s pretty grassroots.”

“In much of Africa, you have a requirement for local ownership. It’s called the ‘golden share’ and can range from 10 per cent or 20 per cent of production that automatically goes to the government as a carried interest and on top of that you’ll have a royalty. There is none of that in Morocco — no royalties, no government interest.”

He points to the Zgounder gold and silver mine operated by Maya Gold and Silver, on the same belt about 400 km away. This is a historic mine that recommenced production early last year. According to a March 2018 preliminary economic assessment (PEA) study, Zgounder has sufficient resources to maintain a mining operation for 10 years, with an annual production of 1.35 million oz of silver, rising to a peak of 4.76 million oz at a grade of 292 g/t silver.

It is currently the second most important silver producer in Morocco after Imiter and is also located in the central Anti-Atlas on the north-west flank of the Siroua Massif. “They all have the same style of mineralization, but in different settings and in different environments so you get different types of deposition,” Richardson adds.

At Silver Hill, Richardson hopes to emulate that success and then some. “First, we’ll very soon have the announcement from the assay results. Then a planned program of channel sampling and underground samples along these historic audits will happen, followed by more drilling.”

Essentials, such as well water and power, are readily available on the Silver Hill property. The water table is approximately 100 m down and there are nearby oases in the area. There is also a power line that runs alongside the highway that Trigon can use for access, with only about 1 km-2 km to connect to grid power.

“We think Silver Hill encompasses three structures that are part of one sedimentary pile,” says Richardson. “So, we want to test to see if we intercept all three, and then we’re going to try to extend the area where we can see the mineralization.”

“We’ve got it mapped over 4 km, in terms of the pieces that we’ve seen along this top structure. What we’re hoping to do at this initial stage is to get a better understanding of the mineralization. We want to extend the resource and test to see if this is a high-grade medium-sized deposit or if it’s bulk tonnage at a lower grade.”

Over in Namibia is Trigon’s other asset, the historic Kombat mine, which is one of the most significant copper mines in the country. It originally commenced mining in 1962 and operated until 2008, producing 12.46 million tonnes of ore grading 2.6 per cent copper over this period.

The mine’s extensive infrastructure includes an 800 m shaft, which was completed in 2006, two other vertical shafts, three decline shafts with ramp systems, extensive underground workings, mine buildings, a tailings facility, a mill, and concentrator.

After a flawed mining plan and operation—which had nothing to do with metal prices at the time—the mine failed and was taken back by the Namibian government. This became a fortuitous event for Trigon’s predecessor who picked up the mine and exploration ground for fractions on the dollar.

On that project, Richardson believes that Trigon can significantly increase the resources and reserves on the property and re-emerge into production with an entirely revamped mine plan. He estimates to at least double or triple the production capacity. The capital expenditure required is in the range of $25 million, a capital cost that is minuscule compared to hundreds of millions to billions of dollars required to build larger mines.

But, that’s in the future as copper becomes more relevant with the world’s modern infrastructure and green power build-out post-COVID-19.

While there are near-term catalysts for Silver Hill, and the opportunity for an immediate value driver though high-grade silver discovery, Silver Hill is now, Kombat is soon.

Learn more about Trigon Metals by visiting their website here.

You can also learn more about the company by watching their Market One Minute below.