When you invest in private equity, you focus on innovative companies: Private equity strategist

Data shows there is a growing amount of private money from south of the border flowing into Canadian businesses.

Experts agree there are a number of factors behind the influx of U.S. capital into Canada including the sheer amount of money floating around in the American market, the geographical proximity, and the value of the Canadian dollar, but questions remain around who stands to benefit most from this trend.

“Once a Canadian company is sold by an American private equity firm, the vast majority of the gains don't go to Canada,” he said.

Canadian businesses are easy takeover targets for American investors, he added, because they are largely undervalued given the Canadian marketplace has less local capital available.

Ruffolo has long fought to keep homegrown companies like Shopify in Canada.

He also warned that the expected rise in U.S. interest rates will only drive more American private equity firms to look at the Canadian marketplace as access to capital sources for Canadian investors might become even further strained, and the valuations of Canadian targets are expected to compress.

“You're going to see more American private equity firms come in and snatch up Canadian companies because it will be cheaper for them to do so," Ruffolo said.

But the skepticism is not commonly shared among all industry watchers – some said this trend could be taken as a show of confidence in Canada.

"Traditionally, U.S. private equity firms often invested alongside other Canadian institutional investors, but as of late, these firms have been doing more investments in Canada on their own, with U.S.-backed financing ready to go,” said Chrystelle Chevalier-Gagnon, partner at McCarthy Tétrault, in an interview.

She noted this is a testament to American private equity firms becoming more comfortable navigating the Canadian marketplace alone and could signal they are serious about growing their presence here for the long term. 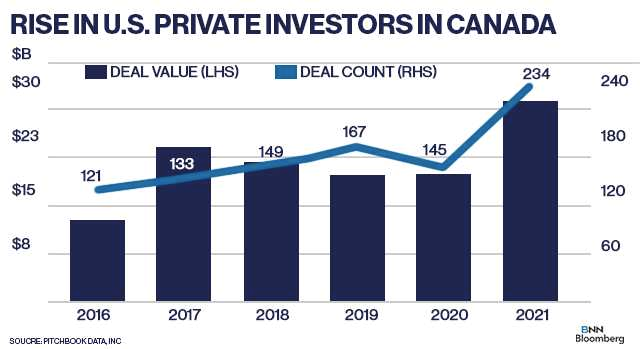 “The age-old concern that international investment into a Canadian company means the company will leave is gone,” said Mike Woollatt, principal at Hamilton Lane, a global private markets investment firm which oversees $98 billion in assets under management, in an interview.

He added that the increase in American private market investors validates how Canadian businesses are competing and winning on the world stage.

John Mercury, a partner and vice-chair at Bennett Jones said in an interview that U.S. private investment in Canada typically leads to significant job creation, expanded infrastructure, enhanced innovation in the Canadian economy and improves liquidity for shareholders.

“If there are any disadvantages brought on by American private equity acquiring Canadian businesses, then they are far outweighed by the advantages,” he said.

"U.S. private equity firms are under significant pressure to deploy capital and to generate returns. This helps explain why they are so focused on Canada as an investment destination," Mercury concluded.

The Canadian private equity marketplace is back to pre-pandemic levels and is robust as ever. In 2021, there was a record 771 completed deals, totalling $18 billion, the latest data released by the Canadian Venture Capital and Private Equity Association revealed.

Industry experts believe that the continued health of the private equity market in Canada, and the growth of private U.S. investment, only stand to benefit the Canadian public.

"Canada's standard of living depends on U.S. and other foreign institutional investors committing to this country," Mercury said.