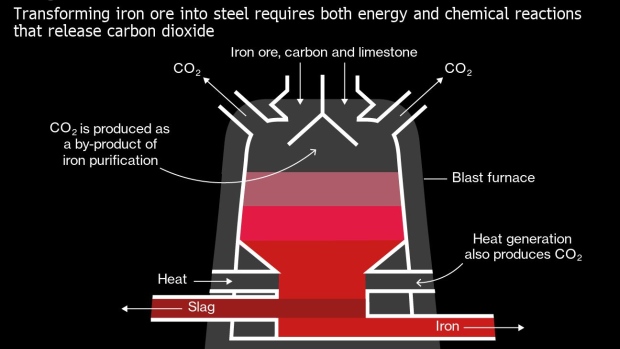 (Bloomberg) --  It’s not just the protesters and Greta Thunberg who were disappointed by the outcome of the United Nations climate talks in Madrid.

Businesses from banks to major polluters see a missed opportunity and even some risks in the decision to shelve work on adding market mechanisms as a tool to rein in the greenhouse gases warming the planet.

From JPMorgan Chase & Co. to Goldman Sachs Group Inc., executives are noticing the rising alarm from scientists and environment groups and want clarity from policymakers about how rules will change. To them, inaction means not business-as-usual but uncertainty about who will shape policies including the cost of carbon emissions.

“If there’s going to be a higher price, then from a pure financial standpoint, what that means is that it will reduce future free cash flow of your company, in addition to the risk of stranded assets,” said Jennifer Wu, global head of sustainable investing at JP Morgan Asset Management. “Policy makers are under tremendous pressure to design and implement policies that will accelerate the pace of decarbonization that will impact all sectors.”

For a second year in a row, the talks that ended last weekend were aiming to flesh out Article 6 of the Paris Agreement on climate change. That section of the landmark deal negotiated in 2015 allows mechanisms like carbon trading to be used in meeting targets to rein in fossil fuel emissions.

The concept is simple: Nations that cut more than their targets or create projects that cut emissions can sell credits representing the savings. Those can be bought by those who have fallen short. That would harness market forces in identifying the cheapest way to cut pollution -- and give industry an incentive to act.

“Carbon markets are absolutely essential in large complex economies,” said Robert Stavins, a Harvard University professor who has advised both Republican and Democratic presidents in the U.S. on environmental policies. To Stavins, “it’s inconceivable” that any set of government rules could deliver pollution cuts more efficiently than a market given how many things emit carbon.

Carbon markets have sprouted up in more than 50 jurisdictions. The biggest, in the European Union, has delivered a surge in carbon prices that is tilting the economics of the power generation business away from the most polluting fuels.

Yet designing a global carbon market is easier said than done. Envoys drawn from energy and environment ministries stumbled on writing a rulebook to set up the program. There were many issues: measuring and verifying the savings projects claim to generate, establishing a central registry to keep track of credits, how to ensure countries can’t double-count savings both by claiming an emissions cut and then selling a credit representing that reduction.

An early version of a UN carbon market known as the Clean Development Mechanism ran into those problems. It lost credibility, leading to a plunge in the value of its certificates.

Green groups and some nations remain opposed to the idea of trading pollution allowances, saying markets shift around the responsibility for cleaning up the atmosphere and distract from the scale of the effort needed. They wanted envoys to focus on pledges to cut pollution much more deeply to keep the earth’s temperature from rising further.

“This COP should have answered peoples’ rallying cry for increased climate action,” said Ulriikka Aarnio, policy coordinator at the Climate Action Network in Europe. “Instead, the negotiations on carbon markets focused on creating loopholes and ways to slice out climate ambition in the current and already inadequate targets.”

Without more developed carbon markets, companies have the prospect for fewer visible price signals to show how quickly they will be forced to clamp down on pollution. In an op-ed in the Financial Times on Monday, Goldman Sachs Group Inc. Chief Executive Officer David Solomon urged governments to put a price on the cost of carbon, whether through a cap and trade system, a carbon tax or other means.

“The markets can and will do much to address climate change, but given the magnitude and urgency of this challenge, that will not be enough,” Solomon wrote. “In most places, there is no pricing mechanism to capture the cost of greenhouse gas emissions to society.”

That leaves executives with a quandary. Many of them have difficulty cutting emissions because what they do is inherently carbon intensive. Steel mills, cement kilns, oil refineries and glass makers all have two problems: they both consume a great deal of heat and use chemical processes that release greenhouse gases. Even if all their heat came from renewables, their chemistry puts out greenhouse gases.

That means it will be impossible for nations to zero out fossil fuel emissions without a major change in policy. The two main options are either carbon market mechanisms allowing polluters to offset emissions with credits or carbon capture and storage technology, which requires subsidies before it works financially. In the jargon of the talks, that means either abatement in terms of reducing emissions or using offsets or allowances from some kind of market.

“We are having discussions with our clients, and the question is should we continue with voluntary markets or wait for what comes out of the Paris Agreement,” said Mauricio Bermudez Neubauer, a principal director in Accenture Plc’s strategy business. “At every company I talk to, the decarbonization strategy has an abatement component and an offset strategy.”

“Our clients are more worried about what investors and their customers are demanding of them now in terms of climate action,” he said. “Carbon markets are part of that toolkit. The lack of clarity is a concern. It makes planning more difficult.”

The political spotlight now moves to Glasgow, where in a year’s time the U.K. will host the next round of climate talks. There will be another push for a deal on markets at that meeting.

But industry and carbon trading advocates are likely to move ahead with their own efforts to deliver mechanisms that allow companies to offset their pollution. Regions like the European Union, California, the U.S. northeast and China have their own standards in place, and those will inform how others act even in the absence of a central guiding force from the UN.

“After negotiators failed a second year in a row to agree on guidance for markets, it’s time to move on,” said Nathaniel Keohane, who watches the talks for the Environmental Defense Fund. “Countries that are serious about using carbon markets should move forward to set their own strong rules. Such a coalition of carbon markets could pave the way for faster, deeper cuts in greenhouse gas emissions.”

--With assistance from Laura Millan Lombrana and Jeremy Hodges.

To contact the editor responsible for this story: Lars Paulsson at lpaulsson@bloomberg.net