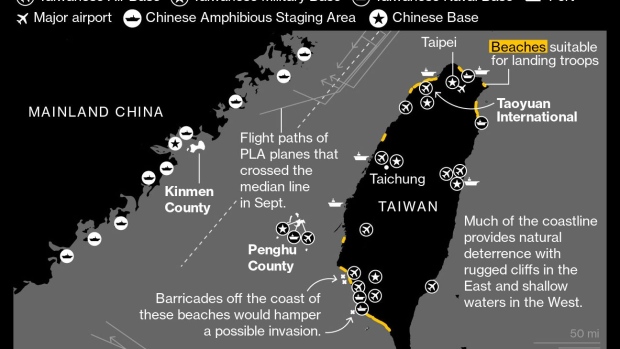 (Bloomberg) -- For all the talk of Chinese President Xi Jinping’s desire to invade Taiwan, one counterpoint is often overlooked: The domestic risks involved in starting a potentially devastating war.

China is now enjoying the fruits of more than four decades of peace, which have turned the economy from an agricultural backwater into one of the world’s primary growth engines. Many ordinary citizens like Beijing resident Joanna, who asked to be identified by her English name due to fears over speaking about Taiwan, are worried a military conflict would erase that prosperity and lead to a rise in poverty.

“A war will surely be a big deal and the U.S. could intervene and things could escalate,” the 40-year-old said, warning that it would “plunge people into misery and suffering.” “The level of uncertainty is high,” she added.

While China has become more assertive under Xi, taking drastic measures to silence dissidents in places like Hong Kong and Xinjiang, those actions primarily served to quell potential challenges to Communist Party rule and reinforce the stability its leaders crave. An invasion of Taiwan, although appealing to China’s increasingly vocal nationalists, represents a much bigger gamble.

Even as China’s growing military advantage raises the odds of a swift victory, the alternative is a war that kills tens of thousands of people, slams the global economy, and potentially opens up the mainland to an attack by the U.S. and its allies.All that could deliver a destabilizing shock to the ruling Communist Party, just as Xi prepares to secure a precedent-defying third term next year. His recent push to minimize wealth inequality, rein in the power of big tech and calm U.S.-China tensions point to a desire to eliminate risks, not take them. Moreover, his rigid policy to tolerate zero deaths from Covid-19 raises the question of whether the public is prepared for mass casualties in a war.

“The likelihood of imminent military conflict in the Taiwan Strait remains low,” said Wen-Ti Sung, a lecturer at the Australian National University’s Taiwan studies program. “The primacy of domestic stability shall triumph.”

Although a war isn’t in anyone’s interest, all sides still have an incentive to play up the threat. People’s Liberation Army fighter jets buzz the island democracy on a near-daily basis, and China’s military last month conducted exercises in the Taiwan Strait in response to “the erroneous words and deeds of relevant countries.” Taiwan’s government warns regularly of China’s aggression, helping to boost international support and backing for President Tsai Ing-wen, who has taken a hard line with Beijing.

The U.S. and its allies, meanwhile, have played up the possibility of a catastrophic war as they look to deter any aggression and make the case for bolstering defenses in the Indo-Pacific region. Last week Secretary of State Antony Blinken said an invasion would be a “potentially disastrous decision,” while former Japanese Prime Minister Shinzo Abe separately warned it would be “economic suicide.”

Even JPMorgan Chase & Co. Chief Executive Officer Jamie Dimon highlighted the domestic backlash Xi could face with an invasion, saying during a panel discussion last month that a Chinese intervention in Taiwan “could be their Vietnam.”

“Body bags in any country have an adverse effect at one point, particularly when the objective may be irrelevant,” Dimon said. “And so I think people will be very careful about what they’re going to do, and I think it would be very painful for the Chinese to do it.”

Within China, state media and party officials often push the narrative that Taiwan would quickly surrender while avoiding any discussion of the potential impact on the mainland. In late October, a deputy director of the State Council’s Taiwan Affairs Office told a forum that Taiwan’s fiscal revenue would be used to improve people’s welfare after unification. A day later a report saying Taiwanese residents were hoarding survival kits went viral on social media.

Still, Beijing last month moved quickly to tamp down speculation within China that a war was imminent, showing the delicate balancing act leaders face in intimidating Taiwan and avoiding any panic on the mainland. In early November, a social media account affiliated with the official People’s Liberation Army Daily newspaper denounced rumors of troop mobilization as a “malicious fabrication.”

“It will not only cause negative impact to the state, the military and society, it could also lead to severe consequences,” said the account, Junzhengping.

Western observers disagree on the urgency of the Taiwan threat. Some see a conflict occurring within the next few years, particularly as China bolsters its military capabilities. China’s arsenal of long-range missiles, including the “carrier killer” DF-21D and suspected hypersonic weapons, could take out most U.S. and allied bases, airstrips and military installations in the “opening hours” of any conflict, according to an Australian research group.

“Most analysts I know believe Taiwan could be invaded next year, albeit at great cost to China and with real risk of a protracted great power war that could escalate to the nuclear level,” said Ian Easton, a senior director at the Project 2049 Institute and author of “The Chinese Invasion Threat: Taiwan’s Defense and American Strategy in Asia.” He added that the U.S. and Taiwan governments “remain overly complacent and seem unwilling to confront the problem in all its complexity.”

Others like Shelley Rigger, a Davidson College political science professor who has written several books about Taiwan, didn’t see a conflict as imminent because the dangers to everyone were “extremely high.” A Taiwan conflict, she said, would be “way messier” than China exerting greater control over Hong Kong or even Russia’s annexation of Crimea.

It’s crucial for the U.S. and Taiwan to be steady and predictable in dealing with Beijing, according to Ryan Hass, who served on the National Security Council in the Obama administration. Biden, who has misspoken on Washington’s position on Taiwan at least four times recently, should register concerns privately and clarify his message on new developments, Hass said.

“The near-term risk likely is far lower than a casual perusal of American commentaries on the subject would suggest,” he added.

In China, that view is prevalent even among citizens that believe the mainland could easily win a war. Hu Xijin, the editor-in-chief of the Communist Party’s Global Times newspaper, last month argued that “peaceful reunification” would likely result from applying enough pressure to make Tsai’s party believe it had no choice but to surrender.

Cai, a 30-something Shanghainese woman who asked to be identified only by her surname, shares that view. She said China would continue to pressure Taiwan’s economy, and the island’s leaders will eventually realize they can’t depend on the U.S.

“I don’t worry about China-Taiwan relations,” Cai said. “And for actual conflict? I don’t think it could reach that point.”