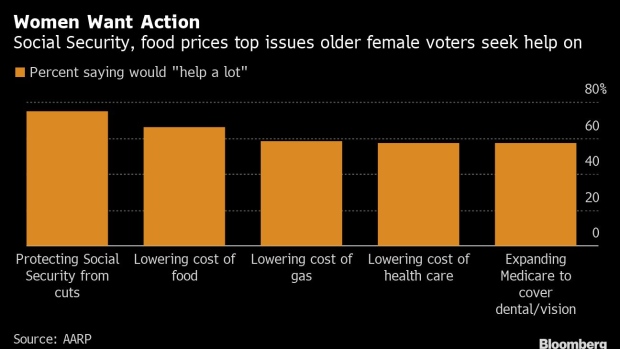 A voter fills out a ballot at the Brooklyn Museum polling site during the New York City mayoral primary election in the Brooklyn borough of New York, U.S., on Tuesday, June 22, 2021. New Yorkers emerging from more than a year of pandemic misery will cast ballots Tuesday for a new mayor who will determine the city's path to recovery. , Bloomberg

(Bloomberg) -- A majority of US women age 50 and over -- one of the largest and most reliable voting blocs -- is still undecided in the final weeks leading to the midterms, casting uncertainty on the outcome of a critical election year.

While nearly all of older female voters said they will cast ballots in November, 51% hadn’t yet picked their congressional candidates, according to a poll from AARP released Tuesday. Four in ten will decide in the last few weeks before the election, and they divide evenly between Democrats and Republicans.

Turnout will be key. Democrats are slightly favored to keep control of the US Senate, while Republicans are seen with a small edge to win the House, according to political analyst FiveThirtyEight.

Women age 50 and over cast nearly a third of ballots in the 2018 and 2020 elections, AARP said, citing voter files and Census Bureau data. That makes them the largest group of swing voters heading into this election season, according to Nancy LeaMond, chief advocacy and engagement officer at AARP.

“Women voters 50+ can make the difference in 2022 and decide the balance of power in Congress and statehouses across the country,” LeaMond said in a statement.

Hispanic and Asian women are more likely than White and Black women to still be weighing their options, AARP found in the survey conducted from Sept. 6-13. The women polled were also divided as to how well the economy is working for them personally, with Hispanics the only group where a majority said it wasn’t.

While worries about inflation and voting rights break along party lines, older women are more unified in their concerns about division in the country, Social Security and Medicare.

As far as what actions would help this group the most, 75% singled out protecting Social Security from cuts. The next biggest priority is lowering food prices, followed by cheaper costs for gas and health care.