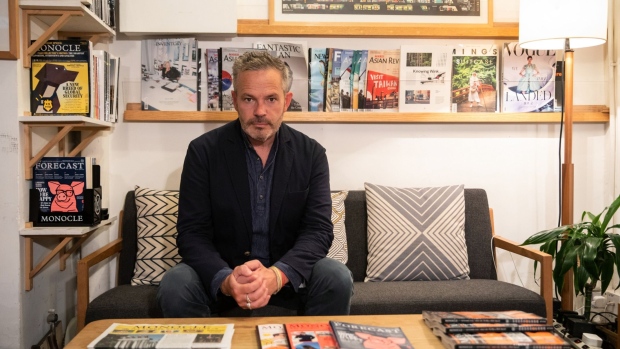 Tyler Brûlé, editorial director of Monocle magazine, poses for a photograph inside a Monocle store in the Wan Chai district of Hong Kong in 2019. , Photographer: Kyle Lam/Bloomberg

(Bloomberg) -- At Bloomberg Pursuits, we love to travel. And we always want to make sure we’re doing it right. So we’re talking to globe-trotters in all of our luxury fields — food, wine, sports, cars, real estate — to learn about their high-end hacks, tips, and off-the-wall experiences. These are the Distinguished Travel Hackers.

The World Economic Forum is underway with high-powered meetings going on in Davos, Switzerland, but Monocle’s Tyler Brûlé, 54, is just as happy being in his home base of Zurich two hours away by car.

“You don’t have to go every year, there’s a flood of people coming through Zurich on their way to and from Davos because they all fly through here,” he says. “I’ve got so many CEOs and government officials wanting to come through our cafe, so Zurich works as nicely as a catch-all.”

That would be the Monocle Shop & Cafe, which opened a few years ago as the brand expanded from its roots in 2007 as a magazine focused on global affairs, design and culture to a book business, digital radio station, and physical shops and cafes. In his job as editorial director, Brûlé is constantly checking out new retailers, up-and-coming destinations and trading travel tips.

Originally from Winnipeg, Canada, Brûlé spent 30 years in London before moving to Switzerland, which he says has been positive for his quality of life. “It makes such a difference to be in a city where the infrastructure actually works and you can see where your tax dollars go,” he says, speaking just a day before more rail strikes were announced in Britain. The UK is in the middle of some of its most disruptive labor actions in 30 years, as groups from post office workers to nurses and teachers go on strike.

“It takes three minutes from my front door to walk to the train platform — and that train in 28 minutes takes me right to Zurich Airport, and I know it’s going to work,” he says about the ease of life in Zurich. “Then you can mostly fly non-stop to Tokyo, Los Angeles or almost everywhere you want to go. It’s not Heathrow, and thank god.”

Brûlé mostly flies with national carrier Swiss, saying it almost feels like the golden age of air travel, especially compared with US carriers. He’s around the world frequently for work, having just returned from a trip to Washington and New York. He used to go to Japan as often as 10 times a year but only made it twice in 2022. He says Japan is a “source of endless fascination.”

Here are some of his top travel tips and observations from life on the road:

The smartest carry-on you can buy doesn’t have wheels.I was anti-wheelie bags, then I became pro-wheelie, and now I’m somewhere in-between. At my age, a doctor would probably say it’s not great to be throwing a bag over your shoulder the entire time, but a bigger bag encourages you to pack more than you need. So now I’ve picked up a very nice bag from Fujito in Tokyo. It’s mostly a menswear brand, but I have a plain navy bag from them, and it’s great for traveling. I’ve created a discipline with it and just pack what I need knowing there will be opportunities to get laundry done on a longer trip.

Ignore your phone after you’ve left the airport. If I land at an airport, I try to use that in-between period between getting off the plane and out of the airport, to check messages and do things on a device. But then once I’m in the car or on the train, I just look out the window and get off my phone. I want to look at the outdoor advertising, see what’s being promoted, how much competition there is between air conditioning companies in a southeast Asian city, or whatever it may be on the billboards. So that’s one thing I really try and be disciplined about. It sounds obvious, but I just like to open my eyes and not stare at a screen — and question everything I’m looking at.

Hotels need to stop skimping on bad lighting.I'm amazed at hotels that just have one type of lightbulb. They spend all their money on fantastic fittings and furniture and still have just the cheapest, worst lightbulbs in the world on the bedside tables. I've almost come to the point where I want to start bringing my own lightbulbs to hotels, I’d try to bring some old school like Edison star light bulbs. No LED lighting, no matter how high-tech or what phone you can control it from, is as good as an old classic lightbulb.

He’d rather have everything in once space than be in a palatial hotel room.Proportion is key to me. I’m not that into big hotel rooms, whenever they upgrade you into the Presidential suite, I’m always thinking okay, what’s in that extra room? What’s the point? And of course, no matter what size room you’re in, hotel staff always walk into the room somehow, even if they knock once. And if it’s a massive room, you have have someone three rooms making noise and I’m wondering who is there? I like everything in control in one space I can see.

Spain’s Galicia is an under-the-radar destination you should know about. I was there this summer and back for business as well and was struck by the—and I hate using this word—authenticity of the restaurants and the culture. The cities like Vigo and Santiago de Compostela astounded me. The only problem is they have tiny little airports, so it’s not entirely well-connected. I was there visiting the headquarters of Inditex, and for a company that is so global, it was amazing to see how Spanish it was, or Galician as people kept telling me. I do wonder why the Ortega family (the family behind Inditex) haven’t built the world’s most amazing hotel there though, they’re doing a lot of great work with Zara Home but they need to do a great city hotel.

Head to Taipei.I’m just a huge fan of Taipei, and the back streets. You just start walking and you hang a left, hang a right and you’re immersed in this verdant neighborhood with potted plants on every terrace and great cafes with outstanding dumplings. I like the Beitou neighborhood as as well, it used to be a weekend retreat, and still is, but now it’s on the subway line. There’s hot springs there, it’s a little bit up in the hills and it feels very far removed and unique for the region.

Japan isn’t what it was before the pandemic.

Japan is an incredibly important market for us, and it’s a place I like going to anyway. When I went back before Christmas, 98% of people were still wearing masks outdoors. And I don’t care what side of the mask debate you’re on, but I think we all have to agree that it’s a reminder that things aren’t back to normal yet. Of course, the Japanese people do wear masks when they’re ill. But it struck me how the city hasn’t returned back to what it was, Tokyo at least is still very sleepy. Last orders are at 9 p.m., many streets are quiet at 10 p.m., and that’s not the Tokyo I love. I love bookshops that are open until 2 a.m. and a city that has a round-the-clock vitality, and Tokyo should be returning to that.

Neither is New York.New York wasn’t as bad as I was expecting, but it’s one thing to go to Goldman Sachs for a meeting and everyone’s in the office, but you look at lots of other office towers and no one is there. It’s just devoid of life. And the streets are dirty, I don’t mean trash but it’s just the amount of graffiti in places it didn’t exist before. And people are acting like they do on the weekends all the time, walking to the corner shops without making an effort to do their hair or shower. The city is caught in its stretchy-pants phase. We talk a lot about corporate responsibility and the importance of vitality in cities and look what is happening by not encouraging people back to the workplace. It’s not just decimating your investment in your office, but it’s decimating the entire city center.

Travel isn’t about relaxation. For me, it’s about trying to see as many new things as I can. I find it very hard, as every leisure trip always drifts into a work trip, but I mean that in a positive way. I just want to go and look at another retailer or go see that new housing development or the next new thing. So for me, when I'm out on the road I’m trying to maximize my time as much as possible. It's when I get back to Zurich that I want to go to the local bath club and take it easy.