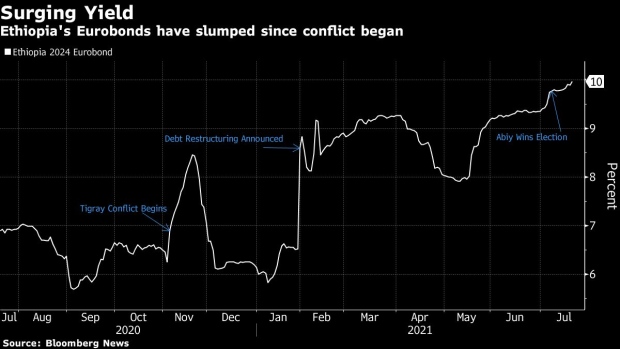 (Bloomberg) -- A widening conflict in northern Ethiopia displaced tens of thousands of people, after fighting spread from the Tigray region to neighboring Afar state, a government official said.

The violence forced 54,000 people to flee their homes in Afar, adding to the more than 2 million who’ve been displaced since war erupted in Tigray in November. The unrest has curbed output in what was once Africa’s fastest-growing economy and contributed to the Ethiopian government’s announcement in January that it plans to seek debt relief from creditors.

The yield on the nation’s $1 billion of Eurobonds rose to 9.97% on Wednesday, the highest in more than a year and up over 300 basis points since the conflict began Nov. 4.

Fighting began in Afar at the weekend, when fighters loyal to the Tigray People’s Liberation Front crossed the state border in pursuit of government soldiers and allied forces who fled after the TPLF regained control of Tigray from federal government forces last month.

“The districts of Yalo, Golina and Awra were fully captured by the TPLF and over 54,000 people were displaced from these places,” Ahmed Kaloyta, a spokesman for the Afar region, said Wednesday. “The regional government is trying to relocate these internally displaced people.”

Ahmed said that the Ethiopian National Defence Forces, Afari special forces and militias have mounted a combined fightback against Tigrayans in areas where their troops had advanced.

Calls to Getachew Reda, a spokesperson for the TPLF, didn’t connect when Bloomberg sought comment. Getachew has previously said Tigray is not attempting to gain territory in Afar, and is instead trying to “degrade enemy forces.”

The conflict in Tigray began when Abiy ordered an incursion in retaliation for an attack on a federal army base by forces loyal to the region’s dissident ruling party. The violence has led to thousands of deaths, and the United Nations has warned that more than 900,000 people are on the brink of famine.

The World Food Programme this week suspended its operations in Tigray after one of its convoys came under fire. Claire Nevill, a spokeswoman for WFP in Ethiopia, said nine trucks and one light vehicle were attacked on July 18 in the Afar region.