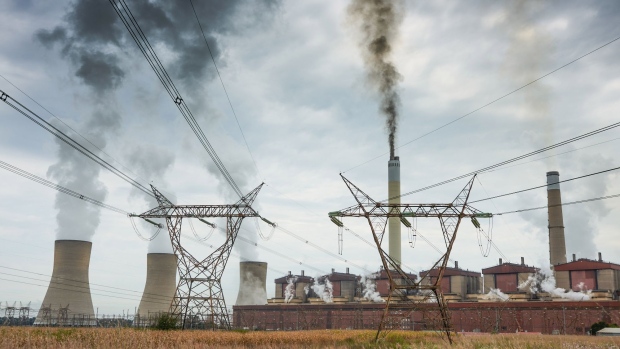 High voltage electricity transmission pylons alongside the Eskom Holdings SOC Ltd. Matla coal-fired power station in Mpumalanga, South Africa on Monday, March 21, 2022. A South African court ordered the government to take measures to improve the air quality in a key industrial zone, saying it had breached the constitution by failing to crack down on pollution emitted by power plants operated by Eskom and refineries owned by Sasol Ltd. , Bloomberg

Workers at nine power plants are protesting, up from six on Thursday, the state-owned company said in a statement. The action by employees follows a deadlock in salary negotiations with labor unions earlier this week and piles more pressure on Eskom, which has been rationing supplies nationally to keep the electricity grid from a total collapse.

Eskom said the workers were holding an “unprotected strike,” which isn’t permitted as electricity provision is an essential service. Unions accuse the company of collapsing the wage talks.

“The increased unavailability of plant has necessitated an extensive usage of emergency generation reserves, which are depleting faster than can be replenished,” Eskom said. “Should these criminal acts of intimidation persist or spread, this would increase the risk of operational disturbances and the implementation of loadshedding at higher stages,” it said, using a local term for rolling blackouts.

The demonstrating workers are blocking roads leading to power stations and other facilities, curbing the free movement of personnel and material the utility requires to generate power, Eskom said. Wage negotiations in 2018 deteriorated into protests, and Eskom to eventually agreed to three-year wage increases of as much as 7.5% annually.