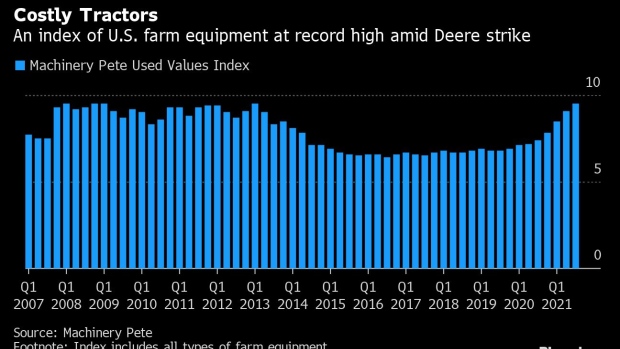 (Bloomberg) -- No one in America knows the used tractor market better than Greg Peterson. Which, frankly, wouldn’t be that much of a claim to fame -- outside the farming towns of the Great Plains -- in normal times.

But these are not normal times.

The used tractor business is quickly becoming a crucial marketplace that’s allowing farmers to keep harvesting corn, wheat and soy day and night at a time of insatiable demand from buyers in the U.S. and abroad. With the four-week-old strike at Deere & Co. factories exacerbating an already acute shortage of new tractors, the used market is the only place for many desperate farmers to turn.

Peterson, known to all as Machinery Pete, says this is the most frenzied he’s seen the market in his 32-year career. At every single auction he’s attended in the past month, records have been smashed on all kinds of makes, models and vintages. Machinery Pete’s Quarterly Used Values Index -- which Peterson created after Wall Street analysts kept calling him for on-the-ground intelligence -- soared to 9.5 in the third quarter, matching record highs set during the commodities boom a decade ago.

The index is up 22% in the first nine months of the year and poised to make its biggest gains yet in the fourth quarter, a boom that’s turning a normally quiet corner of the farming market into Exhibit A of the inflation surge coursing through the U.S. economy. The market has all the ingredients fueling inflation in industries like cars and TVs -- soaring demand from cash-flush buyers, the semiconductor shortage, congested ports and rails -- with the added irritant of the labor stoppage at the world’s largest farm-machine maker.

The match “is now lit,” Peterson says, “and it’s lit while there’s a John Deere strike.”

Inflation in U.S. Builds With Biggest Gain in Prices Since 1990

Peterson, 55, is something of an icon in the tractor world. From his base in Rochester, a city in the southeastern corner of Minnesota, he crisscrosses the Midwest in his Dodge Ram pickup to cover dozens of auctions each year. In the past few weeks alone, he’s hit Sleepy Eye, Minnesota; Cedar Lake, Indiana; Hamilton, Illinois; Keymar, Maryland; and both Calmar and New Hartford in Iowa.

His pitch to outsiders: Machinery Pete is to farm equipment what Kelley Blue Book is to cars, a statement that, while perhaps a tad hyperbolic, is broadly echoed by the many farmers who swear by his pricing data. “Over the years, we developed our own marketplace,” Peterson says.

There’s always, to be clear, something of a scramble for farm equipment, new and used, at the end of the year.

The tax code incentivizes farmers who’ve turned an annual profit to use some of that money to upgrade their machinery before the year is out. It’s just that with prices on many grains surging to multi-year highs and crop sizes robust, farmers have raked in the biggest profits in years and yet have limited new supply to invest that cash in.

Peterson doesn’t like to talk much about where his index could wind up in the fourth quarter -- his clients pay to get that information first, he says -- but all the bidding wars he marvels at from the latest auctions indicate it should easily climb from that record-tying 9.5 level reached in the third quarter.

The surge in used prices has gotten to the point now, some farmers say, where it’s starting to make them worry they’ll struggle to find a tractor if they need one for the planting season next year.

One of the records that Peterson saw fall last week highlighted this angst. There was this John Deere tractor up for sale at the auction in Keymar. It was old -- built in 1998 -- but lightly used, having clocked fewer than 1,000 hours, and in pristine condition. The bidding started at $100,000 and quickly shot up to a final sale price of $170,000. That’s $25,000 over the previous record for that specific model. (Brand-new versions start at $205,000.)

The buyer was so desperate to get his hands on a tractor, Peterson says, that he drove all the way in from Illinois to bid on this one. When he won, he loaded it onto a trailer hitched to his truck and hauled it 12 hours back home.