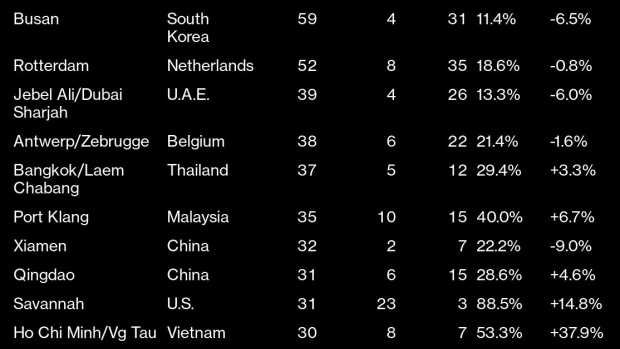 Shipping data compiled by Bloomberg show there are currently 67 container ships anchored off Hong Kong and Shenzhen, around 22% more congested than median daily counts from April through Oct. 14. Typhoon Kompasu caused schools to close in Hong Kong and canceled stock market trading in the financial hub on Wednesday.

It’s sparked a domino effect with 37 ships now waiting off Singapore, 18% more congested than normal. Singapore is regarded as one of the most efficient ports in the world and is a key hub for containers to be moved from one vessel to another while in transit. So any disruption in the city-state is bound to have far-reaching ramifications.

According to the Busan Port Authority in South Korea, vessels are having to wait about three days to berth and that’s causing so-called transshipment cargo to pile up. Almost 40 ships are anchored off Los Angeles, 4.5% more congested than usual, while 11 are cooling their heels off the coast of Malaysia at Tanjung Pelepas, creating a congestion rate about 25% above the median. For Vietnam’s dual hub of Ho Chi Minh City and Vung Tau, things are even worse, with current congestion 38% higher than the median.

“Shipping companies and other stakeholders are trying to resolve the backlog because there are real concerns that many year-end holiday goods will never reach consumers in time,” said Um Kyung-a, an analyst at Shinyoung Securities Co. in Seoul. “This month will be the most challenging period but hopefully things will start to ease from the fourth quarter.”

Congestion at container terminals around the world is adding pressure to already stretched supply chains. Covid-19 cases at ports, along with shortages of shipping containers and labor have aggravated the problem as exporters try to send goods to the U.S. and Europe before the end of the year.

A.P. Moeller-Maersk A/S said earlier this week that it’s diverting some ships from the U.K.’s largest container port because of congestion tied to a trucker shortage. Many logistics companies are finding it difficult to find drivers to pick up and deliver containers, causing a backlog at the Port of Felixstowe.

Port congestion and lack of containers has driven shipping rates to record levels this year. Spot levies to haul a 40-foot container to Los Angeles from Shanghai peaked at $12,424 last month before easing to $11,173 as of Oct. 7, the Drewry World Container Index show. Rates to Rotterdam from Shanghai hit an all-time high of $14,807 last week.

Exporters and shipping companies have been trying to find alternative routes to avoid the backlog. Some cargo from China is now being shipped to Busan and then reloaded on ships bound for Russia’s east coast before being put on trains and sent through to Europe.

The U.S. government announced on Wednesday that the Port of Los Angeles will begin operating 24 hours a day, seven days a week as part of efforts to break the logjam.