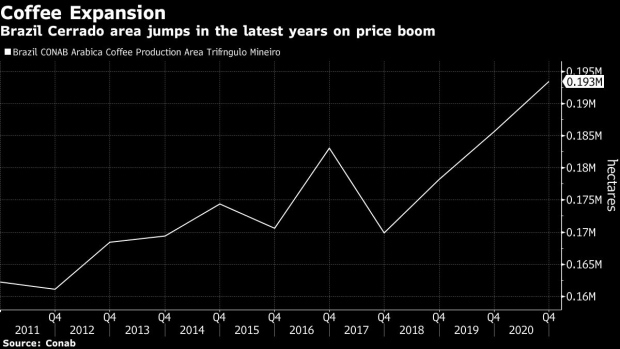 Bouts of freezing temperatures, extreme heat and dryness combined to erode tree conditions in the second half of last year, Francisco Sergio de Assis, the president of Federation of Coffee Growers in Cerrado, said by telephone. The region in Minas Gerais state, which boosted output by 60% in the past decade, almost double the national average. It now accounts for a 10th of all beans grown in Brazil, the top exporter.

This year, production in the Cerrado may be less than 6 million bags, down from a potential as high as 7.5 million bags, Assis said. That would mark a smaller regional crop than in 2018, the previous higher-yielding season in the two-year cycle.

“Half of the Cerrado crop is good and the other half is bad,” Lucio Dias, commercial director at Cooxupe, Brazil’s top coffee producer and shipper, said in an interview after a recent tour of farms. “Cerrado will certainly harvest less than in 2018.”

Amid prospects for lower yields, some Cerrado farmers will boost output after increasing planting areas in recent years. A bag weighs 60 kilograms, or 132 pounds.

Haroldo Veloso, a grower in Carmo do Paranaiba municipality, said he expected output of 20,000 bags, up from 18,000 bags in 2018, after seeding expanded. That trailed the potential crop by 20% following dry conditions and scorching temperatures in October and part of November. Beneficial rain in subsequent months revived the outlook after Veloso had projected a 30% slump from the peak.

In the fourth quarter, arabica coffee surged 28% into a bull market on ICE Futures U.S., partly amid supply concerns in Brazil. Last month, the price in New York plunged 21% into bear territory on renewed signs of a bumper crop.

To contact the reporter on this story: Fabiana Batista in Sao Paulo at fbatista6@bloomberg.net

To contact the editors responsible for this story: James Attwood at jattwood3@bloomberg.net, Patrick McKiernan